2019 is almost over but there's enough time left before we close ready for Christmas for one last news roundup.

First up is the news that Facebook has admitted that it tracks user location data even if individuals have opted out of Locations Services.

The CMA has said that there is a strong argument for the creation of a digital advertising watchdog to monitor the online ad space.

Almost half of marketers are concerned that they could be priced out of Facebook advertising as costs have increased by 90% year-on-year.

Instagram has seen some success with its anti-bullying tools and is now rolling out an extension for one of them.

Snapchat has launched a new interactive ad type and is currently using it to advertise film trailers.

Finally, Twitter has made a small change to how lists are displayed when they are shared as part of its efforts to further content discovery and engagement.

Facebook admits to tracking location data even when users opt-out

According to 9to5Mac, Facebook confirmed this in a letter to two US senators. The social media giant said that it uses three methods to track the location of its users, with Location Services being just one of them.

In a letter addressed to Senators Christopher A Coons and Josh Hawley, Facebook also says that it is able to look at users’ activity.

The letter stated: “Even if someone does not enable Location Services, Facebook may still understand information about the location based on information that they and others provide through their activities and connections on our services. For example, if someone responds to an event on Facebook for a local music festival, upload a location-tagged video, or gets tagged by a friend in a check-in at a restaurant, these actions give us information about that person’s likely location. Similarly, a person might share where they live by setting up a location in Marketplace of adding their address to their profile.”

On top of these methods, Facebook can also use IP addresses to get a rough location of its users, although this method is fairly imprecise.

According to Facebook, this access is “reasonable” as it allows the platform to better target ads and sponsored posts. However, the senators who received the letter have both criticized Facebook’s methods.

Mr Coons said: Facebook claims that users are in control of their own privacy, but in reality, users aren’t even given the option to stop Facebook from collecting and monetizing their location information.”

This news is likely to cause further criticism of Facebook, which has come under fire for how it handles and protects data in recent months.

The Competition and Markets Authority (CMA) has said that it sees a “strong argument” for the formation of a watchdog for the digital ad industry. It published a report looking at online platforms and digital advertising, which found that the dominance of Facebook and Google is reducing competition in the digital arena.

According to the CMA, it is concerned that Facebook and Google have been able to “entrench” their positions, which has caused negative consequences both for advertisers and users. As a result, it believes that the creation of a regulator to monitor online platforms and digital advertising could provide benefits.

In terms of how this would affect Google, third-party access to click-and-query data could be required. It may also change how phone manufacturers decide on the default search engine that is used on devices.

For Facebook, it could mean an increase in its interoperability with other platforms.

The CMA report also highlights the fact that the watchdog is considering a “fairness by design” duty in order to stop barriers being put into place that could reduce entry to online platforms for rivals. On top of this, it is also looking into how conflicts of interest in digital advertising could be dealt with.

However, the CMA is keen not complicate the digital landscape by making plans that are not in-line with work currently being done by the UK government. Any plans that the CMA puts in place must therefore fit with the regulatory work being undertaken by the government.

The CMA will now seek consultation of the results of its interim report before releasing its final report in 2020.

A spokesperson for the Advertising Association said: “We believe that a healthy, competitive online advertising market is important for the long-term sustainability of the advertising industry and the wider economy. It is important that the CMA ensures its work is future-proof and coherent with other government and regulatory reviews and allows the UK to retain its international standing as the most digitally developed market in the world.”

As Facebook advertising gets more expensive, marketers have reported concerns over getting priced out of advertising on the platform. According to research from AdStage, cost per milles (CPMs) on Facebook have grown 90% year-on-year. Some 85% of marketers are concerned by this increase in costs, according to a new survey from LiveIntent.

The survey found that 13% of marketers are “extremely concerned” by the rise in CPMs with 47% saying they could ultimately be priced out of advertising on Facebook.

Kerel Cooper, senior vice president at Live Intent, said: “Facebook is a necessity for any brand looking to grow its business, right alongside search. But there is a growing discontent due to the steady rising costs of advertising on the platform.

“The benefits of Facebook advertising – reaching a logged-in audience with highly targeted and measurable campaigns – aren’t limited to just Facebook. In order to compete in an era with rising Facebook costs, marketers must diversify their ad spend and turn elsewhere to reach new and incremental audiences and inventory.”

While advertising costs on the platform may be increasing, advertisers need to consider the ROI they get from Facebook ads. After all, if the ROIs remain high, it could be worth the extra spend. However, it may also be worth considering alternative options that deliver good results for less initial spend, even if ROI isn’t entirely on par with Facebook. 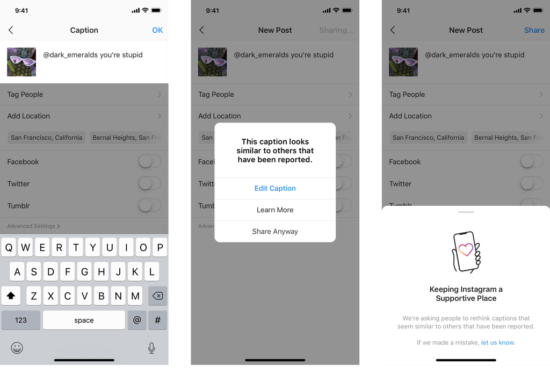 Back in July, Instagram launched its anti-bullying tools, including a pop-up that provided a warning to users when its AI detects that a comment they are posting could be offensive. According to the platform, this prompt has seen some good results and so Instagram is going to roll it out further.

The same tool will now be added to post captions, pointing out captions that are similar to those that have been reported before users post them with their photos or videos. This means that captions will now also be monitored by Instagram’s anti-bullying AI.

In a blog post, Instagram said: “Today, when someone writes a caption for a feed post, and our AI detects the caption as potentially offensive, they will receive a prompt informing them that their caption is similar to those reported for bullying. They will have the opportunity to edit their caption before it’s posted.”

While the tool won’t stop the potentially-offensive caption from being posted, Instagram hopes that will encourage users to consider what they’re posting and the consequences of their actions.

Snapchat has launched a new interactive ad format as part of the campaign promoting the upcoming film ‘Top Gun: Maverick’.

The new format is called ‘trailer reaction lens’ and switches users’ screen to split-screen so the trailer plays on the top half of the screen while the view from their front-facing camera is on the bottom. This lens enables users to film their reaction to film trailers, as well as add dedicated mask-type tools to their video.

The tool is fairly similar to TikTok’s ‘React’ option, showing that Snapchat is continuing to up the ante in terms of competing with the newer app. It could also be easily applied to more than film trailers, giving advertisers more options for showcasing products and services on Snapchat. 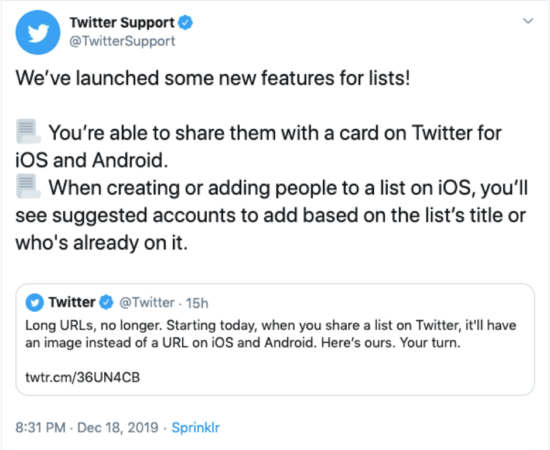 The first new feature will see long URLs when sharing a list on Twitter to become a thing of the past. Instead, an image and title link card will visible on iOS and Android. The card comes in a range of basic colours and is sure to look better than URLs, encouraging engagement.

The image included on the card cannot currently be edited, instead, it is auto-generated when a list is shared. However, Twitter is looking at other options that could lead to some form of customization.

On top of this, Twitter is also adding new recommendation tools in order to provide users with guidance in terms of who should be added to lists. This could help to make lists a better-used feature on the platform, leading to better tweet discovery.