Twitter has admitted that a 'bug' has allowed data submitted for safety purposes to be used for ad targeting, prompting many in the industry to blast the platform.

A new survey of chief marketing officers has revealed that premium digital media provides the best ROI for companies.

TikTok has come under fire as it is revealed that it is using Creators' videos for advertising purposes without informing them.

We've got more info on all of these stories below.

Twitter has admitted that it has been using data submitted for security reasons to target ads. In a statement released by the social media platform, Twitter said that email addresses and phone numbers provided for safety or security reasons may “inadvertently” been used in its Tailored Audiences and Partner Audiences advertising system.

The platform said that it was not able to confirm how many people had been affected but felt that releasing a statement was important “in an effort to be transparent”. It made it clear that no personal data was shared externally with third-parties or Twitter’s partners.

Twitter said that the issue that allowed this data to be used for targeting purposes has been addressed and it was no longer the case that it was happening after September 17th.

This follows on from a data bug in May of last year that saw 330 million users having to change their password after an issue had seen Twitter’s system storing passwords in plain text. Twitter has also experienced an issue that went on for two years and leaked personal phone numbers, as well as sharing iOS user location data with advertisers without permission.

People have hit out at Twitter for the latest announcement, with ad-tech and cybersecurity expert Dr Augustine Fou saying: “Twitter should have the balls to say: ‘This is what we did, we didn’t clearly explain to you that we could/would also use the data for advertising and targeting. Now we are telling you and are giving you the chance to opt-out or give us feedback.’ That would have been the right and honourable thing to do.”

Twitter has asked that those with questions or comments about the bug contact its Office of Data Protection.

Over half (54%) of chief marketing officers (CMOs) say that premium digital media provides the best ROI when it comes to digital advertising.

New research from Teads has revealed that premium digital media gives the best results if companies can pay to play, with 63% of CMOs from brands with a turnover of £100 million to £499 million agreeing that this is the case. Premium media, along with social media, was also voted as the most transparent platform.

The survey, conducted in conjunction with CensusWide, asked 100 CMOs how they value different forms of media when it comes to driving results. Of these, 73% said that digital advertising forms an important contribution to their company revenues.

However, digital advertising does offer some challenges, including trust (41%), data on consumer behaviour (35%), transparency (33%), fraud (33%) and scale (33%). Even with these challenges, CMOs cited brand building (38%), targeting (54%) and customer engagement (52%) all provide great opportunities.

Justin Taylor, Teads UK managing director, said: “These results prove that real media delivers real results. And we only see this developing more into the future Millennials and Gen Z are getting more and more involved and educated across politics, economics, culture and society. And as they do, they will lean into the affinity of the new brands they love to guide them. As this continues to build, the options available to agencies and advertisers can only flourish.” 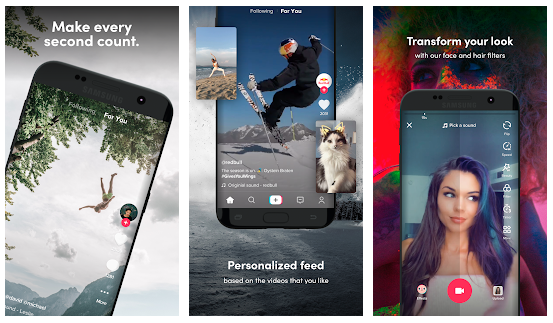 TikTok has come under fire for its questionable advertising methods after it was revealed that the platform has not been seeking permission from creators to use videos in advertising, despite having done so.

AdAge reports that TikTok has been using videos posted on the platform as part of its external advertising activities. However, the users who have created these videos haven’t been informed that they are being used for the purpose of promotion.

According to the report, one TikTok user was notified by friends that his video had appeared on Snapchat as an advert for the platform. However, The user had not knowingly agree that his video and likeness could be used in this way.

While TikTok’s usage guidelines state that it an use user-submitted content, much like the terms listed on other social media platforms, its guidelines are a lot more specific. The platform’s ‘Creator Program’ terms state:

“But in consideration for TikTok allowing your participation in the Program, you hereby grand TikTok royalty-free, non-exclusive, worldwide, unrestricted and sub-licensable license to reproduce, distribute, publicly display, communicate to the public, publicly perform, make available, create derivative works from, broadcast, and retransmit (in certain contexts) Posted Content by any means and through any media and formats for the purposes of: (a) displaying and sharing your content to other users of the Service and (b) providing the Service as authorized by this Terms. The grant of the license is limited for the Term of your participation in the Program (defined below). No financial or other compensation will be made for the license. TikTok will have no ibligation to use any of your Posted Content for any purpose, and any decision to use or not use your Posted Content for the before mentioned purposes will be in TikTok’s sole discretion. TikTok has no obligation to notify you if it elects to use your Posted Content in any manner pursuant to the license granted to TikTok herein.”

While these terms mean that TikTok is not breaking any laws, it is breaking trust and ultimately damaging the relationship it has with creators on the platform. This could ultimately hamper its growth. 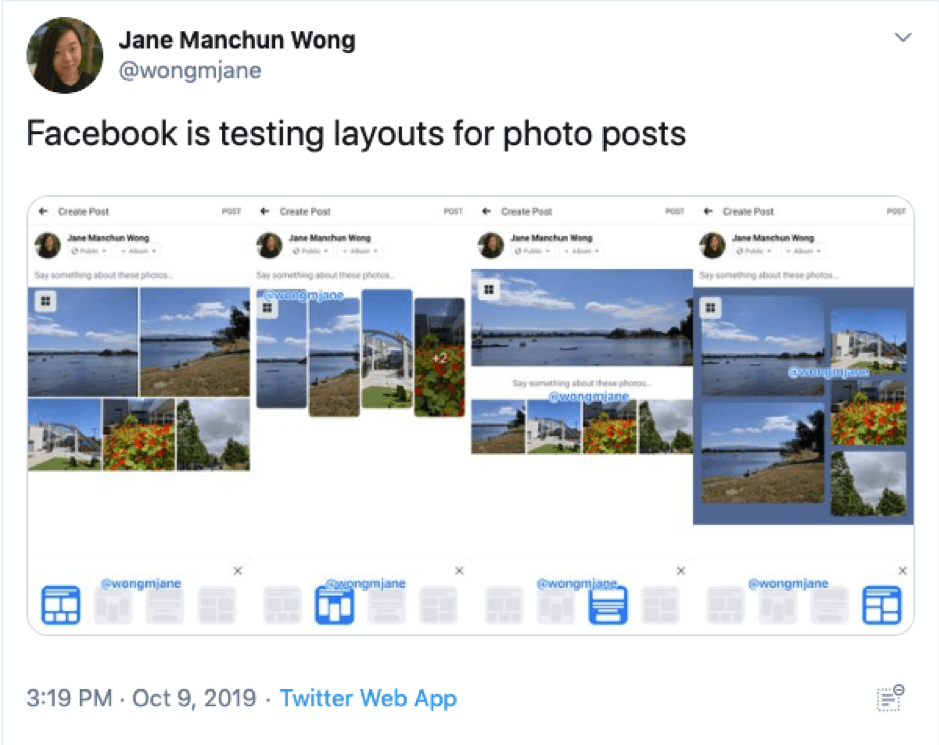 With photos and videos being hugely engaging forms of content across social media, Facebook has continued to experiment with how these types of content are presented on the platform.

The latest update seems to be in the testing phase, with reverse engineering expert Jane Manchun Wong reporting on Twitter that Facebook seems to be experimenting with layout options when you upload multiple images.

If it goes forward, the process would allow users to choose from four different layouts, allowing them to have more control over how their multiple image updates are shown within a post. It looks as though Facebook users would be able to highlight certain photos or even add a coloured background, all of which could help make posts more engaging.