This week has seen Facebook finally announce the rollout of its 'Clear History' tool, which will enable users to have more control over their off-site data. While it is only available in select locations, for now, the tool will soon be available to all Facebook users - but what impact will this have on advertisers?

Twitter has announced that it has blocked a number of accounts that were found to be backed by the Chinese state in the wake of growing tensions between protestors and police in Hong Kong, with Facebook following suit.

YouTube has announced that its chat function will no longer be available from next month, with more focus being put on public comments and YouTube stories.

LinkedIn has released a new guide on how individuals and organizations can get the most out of its live-streaming function, despite this feature not being globally available just yet.

Twitter is looking to make the most of video engagement on the platform with new video ad options while Facebook has launched new ad tools for movies, to encourage booking without needing to leave the platform.

Get more details on all of these stories with our news roundup: 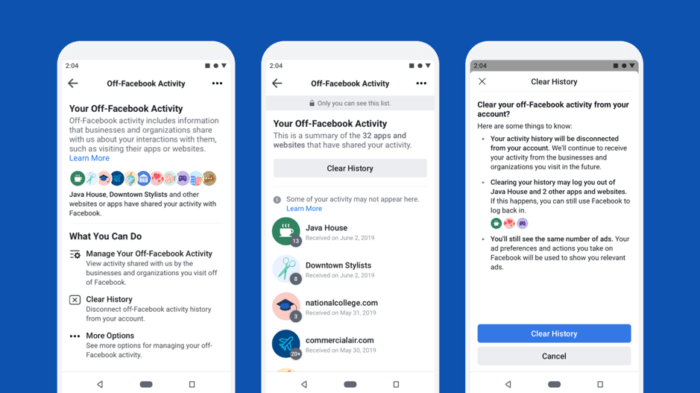 Facebook has announced that it is starting to roll out its ‘clear history’ tool that will allow users to see what apps and websites send information to Facebook when they are used. The tool will enable users to remove the information from their accounts and stop Facebook from being able to store the information in the future, allowing greater control over personal data.

While the data isn’t deleted, it is disconnected from users’ profiles so it cannot be used by Facebook or advertisers. The option was promised by the social media platform in May 2018 following the Cambridge Analytica scandal and it is now being rolled out, starting in Ireland, South Korea and Spain.

In a blog post, Facebook said: “Today [August 21st], we’re introducing a new way to view and control your off-Facebook activity. Off-Facebook Activity lets you see a summary of the apps and websites that send us information about your activity, and clear this information from your account if you want to. This is another way to give people more transparency and control on Facebook, along with recent updates to our Ad Library, updates to “Why am I seeing this ad?” and the launch of a new feature called “Why am I seeing this post?.”

While calls for better transparency over Facebook’s data storage and use have been continuous, the platform has experienced a number of issues that have meant the delivery of this solution has been delayed by over a year.

On Facebook’s Engineering Blog, it explained some of these issues: “Building Off-Facebook Activity required an extensive redesign of the way our systems store and process this activity and new methods for disconnecting information about a person’s off-site activity from their account. Since we do not store off-site activity in one centralized profile, we also had to bring together a variety of data sources and develop new methods for managing different types of information across our infrastructure.”

While the option will give users more control over their data, it will also likely impact ad targeting tools on Facebook, which could affect how well ads on the platform perform. Of course, this impact depends in how many users decide to remove their history, although Facebook has said it will affect in-depth tracking. 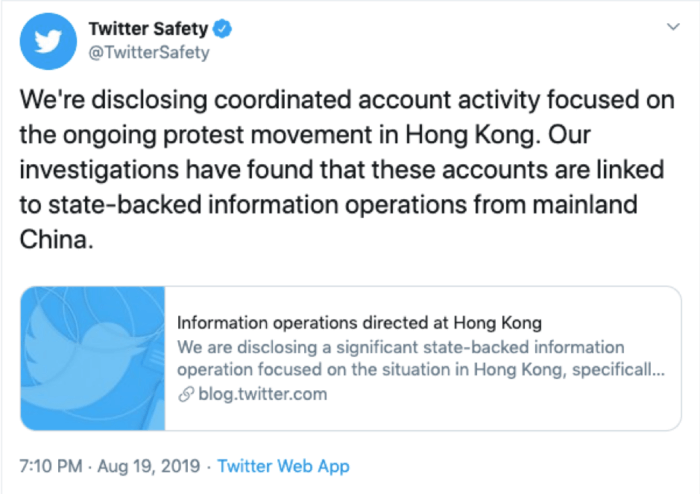 As protests in Hong Kong around a controversial extradition bill continue, Twitter has stopped state-controlled media outlets from advertising on the social media platform.

Although Chinese state media outlets will still be able to post on their Twitter accounts to organically reach audiences, they will no longer be able to use the platform’s ad services. Outlets have 30 days to offboard from the platform’s ad products, with Twitter not accepting any new campaigns.

Twitter has also suspended 936 accounts run by the Chinese government, explaining in a blog post that “these accounts were deliberately and specifically attempting to sow political discord in Hong Kong, including undermining the legitimacy and political positions of the protest movement on the ground.”

According to Twitter, its investigations provided “reliable evidence” that showed that the accounts were engaged in a “coordinated state-backed operation” that saw these accounts amplifying tweets related to the protests in Hong Kong.

Twitter is currently blocked in China, so it seems as though these suspended accounts were using VPN services to use the platform.

In addition to Twitter’s action, Facebook said that it has also removed a network of groups, pages and accounts that had originated from China and were involved in similar actions on its platform. This apparently happened after Facebook received a tip from Twitter that the accounts, groups and pages were involved in “coordinated inauthentic behaviour” that focused on events in Hong Kong.

Nathaniel Gleicher, head of cybersecurity policy at Facebook, said in a blog post: “ Today [August 19th], we removed seven Pages, three Groups and five Facebook accounts involved in coordinated inauthentic behaviour as part of a small network that originated in China and focused on Hong Kong.

“The individuals behind this campaign engaged in a number of deceptive tactics, including the use of fake accounts – some of which had already disabled by our automated systems – to manage Pages posing as news organizations, posts in Groups, disseminate their content, and also drive people to off-platform news sites.’

Citizens of Hong Kong have been protesting an extradition bill that would allow local authorities to detain and extradite individuals who are wanted in territories without extradition agreements with Hong Kong, such as Taiwan and mainland China. Although the extradition bill was suspended on June 15th by the country’s chief executive, and then declared “dead” on July 9th, it has not been announced that the bill is to be fully withdrawn.

This has led to a number of violent protests and police clashes as citizens seek to express how unhappy they are with China’s governance of Hong Kong.

YouTube is set to remove its chat option in a bid to put the focus on public comments. The platform launched its chat function back in 2017 but it will now be removing it in September, meaning people will need to rely on public sharing through comments, YouTube stories and posts.

Google said: “Two years ago, we launched a feature to enable you to share videos via direct messages on YouTube Since then, we’ve also focused on public conversations with updates to comments, posts and stories, We’re constantly reevaluating our priorities and have decided to discontinue YouTube’s native direct messaging feature while we focus on improving public conversations.” 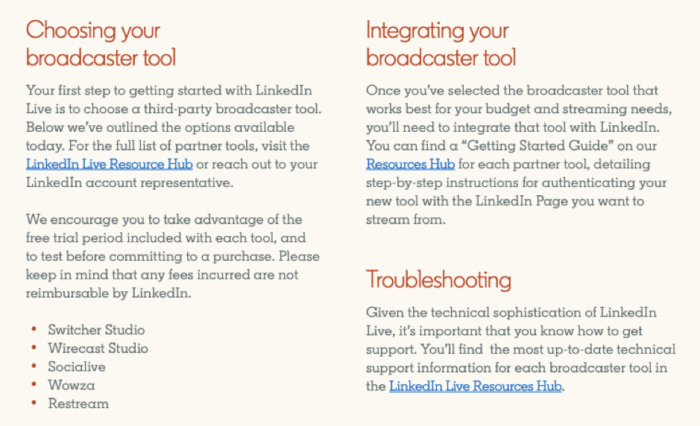 LinkedIn Live isn’t yet available to everyone but to help people make the most of it when it is fully rolled out, the social media platform has released a new 13-page guide full of actionable tips.

The platform made its live-streaming option to available to select users in the US in February and is due to start rolling it out to more users and countries in the future. Ahead of this, the guide has been released in a bid to ensure users, whether individual or organizations, make the best use of LinkedIn Live.

The guide includes some interesting information on the live-streaming function, including the fact that a third-party video platform is required to use the option. Ultimately, this means that users need to use a dedicated video tool to create live videos, which will lead to more professional streams.

It also includes some best-practice advice for broadcasts and video production, ensuring users consider the way their videos are presented. This makes the feature stand out from live video functions on other social platforms, which are very much about in-the-moment videos.

Twitter is looking to make the most of the growth its video advertising options have seen with the introduction of a six-second bit unit. Twitter’s second-quarter earnings report, which showed a 20% annual increase in ad engagements, with video advertising performing particularly strongly, according to the platform.

To capitalize on this, Twitter will be launching a self-serve ad tool across both its mobile apps and desktop site. Available across in-stream video sponsorships, promoted video and in-stream video ads for assets that are under 15-seconds in length, the new self-serve tool means advertisers will only be charged if at least 50% of the ad is viewed or six seconds or more.

This latest bid type continues on from the improvements it has been making to the platform, including its redesign that launched in July. 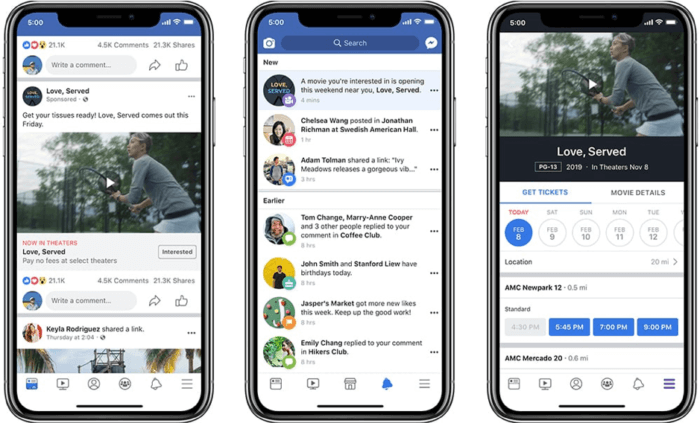 Facebook has launched new advertising tools that are designed specifically for cinema releases. The new tools are aimed at helping to better promote new film releases on the social network while helping users find the movies that they are most likely to be interested in.

The first new tool allows brands to create movie reminder adverts, which feature an ‘interested’ button. Facebook users can click the button after viewing the ad, meaning the social network will send a notification once the film is in the cinema. The button will also take users to the platform’s native showtime lookup, which means they can book tickets for the film.

On top of this, Facebook has launched movie showtime ads. These are launched when users search for films on the platform that have already been released and also take them straight to the portal via the ‘Get Showtimes’ button to allow them to book tickets without needing to leave Facebook.

“Movie reminder ads and movie showtime ads are now available for all film studios in the US and UK.”