New research has revealed that the majority of the British public wants stricter rules around political advertising.

Twitter has announced that it is exploring a decentralized social media network model with the creation of a new independent team.

YouTube has updated its harassment policy, introducing stricter rules and harsher punishments in a bid to make the platform a safer place.

We've looked at all the details in our news roundup.

Following weeks of political posting on social media and the news that 88% of Conservative digital adverts were found to be misleading, the vast majority of Brits support tougher political advertising rules.

A total of 87% of the British public are supportive of stricter regulations around political advertising in order to enforce factual claims only. This comes after the majority of general election advertising was found to be “illegal, indecent, dishonest and untruthful”.

The research, performed by YouGov and commissioned by the Coalition for Reform in Political Advertising (CRIPA), revealed that political parties were making claims that would have been banned by the Advertising Standards Authority (ASA) if they were made by brands. Unfortunately, the ASA doesn’t have jurisdiction over political advertising and cannot take action against those parties spreading misinformation via ads.

According to CRIPA, the research shows that millions of voters could have been influenced in their decision on which party to vote for by false, insufficient or misleading adverts.

The co-founder of CRIPA, Alex Taiyt, said: “With a significant drop in the public’s trust of politicians and the democratic process, we hope this paper illustrates the urgent need to set out some basic rules for political advertising content. There currently aren’t any.

The ASA’s mantra of legal, decent, honest and truthful should apply to political ads just like it does to all other forms of advertising. This election has provided ample evidence of the need for leadership from the political parties to act.”

A failure in Facebook’s transparency tools saw almost half of all political ads in the UK vanish from its online records for more than 24 hours. The glitch, which meant that information on political ads worth a combined £7.4 million wasn’t visible for more than a day, happened just a few days before the UK’s general election.

Analysis from POLITICO discovered the oversight, which puts more pressure on Facebook to review its policies around political advertising.

The transparency tools were put in place by Facebook in an attempt to provide greater transparency around how political groups use its platform. According to Mark Zuckerberg, the online database provided by the company provides greater awareness of who is buying political ads, which can help fight interference in elections.

However, the fact that the system failed just two days before the UK’s general election shows that it is not infallible. It also brings into question whether the system is ft for purpose ahead on next year’s election in the US.

Laura Edelson, a computer scientist at New York University who has been tracking political ad spend ahead of the UK election, told POLITICO: “This is not how this is supposed to work. Facebook should be proactively telling the transparency community what has happened. That didn’t happen in this case.”

A number of other experts also flagged the fact that Facebook ads in other countries disappeared from Facebook’s transparency register. Facebook said that the bug has been fixed and that all political ads were back online.

Media prices on the rise as audiences fall

Media prices will see an average increase of 6.1% in 2020, according to the latest Global Advertising Expenditure report from Zenith. This increase in cost is due to the commercial audiences supplied by media owner declining by around 1.6%.

The report indicates that advertisers have got a tough year ahead of them, with a continued decline in commercial print audiences and TV audiences starting to shrink as streaming services like Netflix become the norm.

Zenith predicts that the price inflation will counterbalance the fall in TV audiences, meaning that the next three years will likely see zero growth in the medium.

Unfortunately, newspapers and magazines will not be able to offset the audience decline so easily. Although prices for advertising in these mediums is on the rise, they are not increasing at a fast-enough rate to compensate for the readership decline. The report estimates that newspaper ad spend will fall by 4.5% a year to 2022 with magazines seeing spend shrink by 8.1%.

Zenith said that commercial audience supply has declined by 1.3% a year on average since 2010, however, media inflation has reached an average of 6.5% per year since then.

Jonathan Barnard, head of forecasting at Zenith, said: “This is a continuation of a trend that has shaped the ad market for the whole decade, but what we’re now seeing is that TV inflation has reached high enough levels that it’s forcing brands to shift spend to other channels, even though they are generally less effective at generating rapid mass outreach.

“Overall brands have been faced with a choice: continue to rely on TV, spending more to get less, or invest in data and technology that allows them to aggregate digital audiences costs effectively. The latter is a more sustainable strategy in the long term.”

While print and TV advertising looks a bit bleak, internet ad spend will continue to increase, allow the rise in spend will slowly decline. 2019 saw internet ad spend increase by 11% and it is estimated that this will fall to 10% in 2020. By 2022, it will see an average yearly spend rise if 9%, at which point Zenith expects internet advertising to make up 54% of total global ad spend, an increase of 7% from current figures. 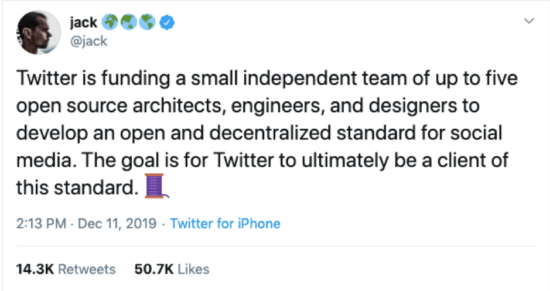 A new team within Twitter has been created in order to look at the potential for “an open and decentralized standard for social media”. Twitter CEO Jack Dorset announced the team, called bluesky, which will be an independent team of up to five individuals.

According to Dorsey, a decentralized model could help social networks address a number of key concerns. This includes content moderation guidelines, a new approach to algorithms and new systems to stop misinformation being spread. 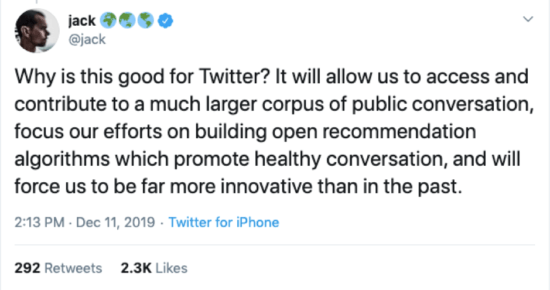 Dorsey said in a tweet thread that as well as developing a decentralized standard for social media, the team will build a community around it that is inclusive of companies, organizations, researchers and civil society leaders.

The ambitious project will likely take years to develop a useable decentralized standard for social media communication, but Dorsey believes that it could be a key initiative in advancing the capability of social media to keep people connected.

YouTube has announced updates to its policies relating to user harassment in a bid to better protect its users. The video platform said the updates will now cover “veiled or implied” threats, repeated attacks over time, and insults based on race, gender or sexual orientation.

The changes come after YouTube said that earlier in the year it became clear that there is more it can do to protect its creators and community from harmful comments. The updates to its harassment policy follow on from talks with creators and experts, who shared their perspective and helped inform the updated policies.

Three overarching updates are being made to the policy going forward:

A stronger stance against threats and personal attacks

While YouTube has always sought to remove videos that are explicitly threatening or encourage harassment, the policies will take this further from now on. As well as explicit threats, the platform will also ban veiled or implied threats. This includes “content simulating violence toward an individual or language suggesting physical violence may occur.”

On top of this, YouTube is also building on its hate speech policy and will no longer allow content that “maliciously insults” someone based on gender expression, race or sexual orientation. This change applies to everyone using the platform, including both individuals and public officials.

Consequences for a pattern or harassing behaviour

YouTube is also tightening policies for its YouTube Partner Program (TPP) to make rules even tougher n those who engage in harassing behaviour, especially repeated behaviour. This will ensure that only trusted creators are rewarded and that channels that repeatedly break harassment policy rules will be suspended from YPP. Suspensions means they will be unable to make money from YouTube.

On top of this, YouTube may also remove content from channels if they are found to be repeatedly harassing someone. Continued behaviour will also lead to more severe action, such as terminating the channel completely.

The comments on YouTube can often be a place where individuals experience harassment and so the platform will be stepping up efforts to remove inappropriate comments. Over 16 million comments were removed in the third quarter of this year due to harassment and the platform is expecting this number to increase following these policy changes.

It will also be providing new tools for creators in order to help them further shape the conversations on their channels. For example, creators will have the ability to view comments that are potentially inappropriate so they can see whether it should be posted. Testing of this tool saw a 75% reduction in user flags on comments.

YouTube hopes that these changes will better protect its community.