This week has seen another update to Twitter, this time to help stop the spread of misinformation ahead of elections. A new reporting feature will allow users to flag incorrect information that could influence people's election decisions.

LinkedIn is helping freelancers and business-owners showcase their services on their profile with a new trial feature.

Facebook has launched a lawsuit against a company and individuals who have been selling fake engagement on Instagram.

New research has found that more people turn to Instagram to find holiday locations than travel agents, with many people choosing destinations based on how photogenic they are.

The Sri Lankan government has blocked social media while investigations into the terrorist attacks that killed 290 people are ongoing.

Snapchat saw its daily users increase and revenue growth during the first quarter of the year, following 2018 declines.

Finally, to celebrate the final Avengers film, Google has launched a fun Easter egg when users search for Thanos.

Find out more about each of this week's news stories below.

In an attempt to reduce the amount of misleading content being shared ahead of the EU and Indian elections, Twitter has launched a new report function. Specifically designed to target content that is misleading to voters, Twitter’s reporting function will be launched in Europe on April 29th and then globally throughout the rest of the year.

Designed to help reduce interference and manipulation as elections are looming, the tool will enable users to flag posts specifically for misleading information. This will include information like how to register to vote, what identification voters need and the date of elections, if this information is incorrect.

In a blog, Twitter said: "Voting is a fundamental human right and the public conversation occurring on Twitter is never more important than during elections. Any attempts to undermine the process or registering to vote or engaging in the electoral process is contrary to our company’s core values.

"Today, we are further expanding our enforcement capabilities in this area by creating a dedicated reporting feature within the product to allow users to more easily report this content to us. This is in addition to our existing proactive approach to tackling malicious automation and other forms of platform manipulation on the service. We will start with 2019 Lok Sabha in India and the EU elections and then roll out to other elections globally throughout the rest of the year."

This move follows on from calls for social media platforms to do more to stop misinformation around elections.

LinkedIn is testing "Services" field in profile, which will pair well with

LinkedIn is testing a new profile option that could be beneficial for freelancers. The B2B social media platform is now allowing users to fill in a ‘Services’ section to showcase what they do. This could make I easier for businesses to find freelancers with the skills they are looking for.

A screenshot posted by Jane Manchin Wong shows that users are able to input details into a new field so they can ‘Add services you offer’. Not only will this show other users what services are offered by individuals on the platform, it is likely that they will show up in searches for the services they list.

Now that freelancers are a lot more common, especially within the digital arena, this move by LinkedIn makes perfect sense. With the opportunities for remote working and a broad range of specialisms being required by businesses, listing services could better enable organizations find the right people.

However, as the new feature seems to be atrial and is not yet visible for everyone, it is not yet known whether it will be rolled out across the entirety of LinkedIn.

According to Facebook, the defendants created websites and companies to sell the fake likes and followers. This ultimately undermined Instagram’s credibility. Accounts associated with the defendants were previously suspended and warnings were issued that they were violating terms of use, however, their activities continued, causing Facebook to file a lawsuit in US federal court.

In a blog post explaining the decision, Facebook’s Director of Platform Enforcement and Litigation, Jessica Romero said: “By filing a lawsuit, we are sending a message that this kind of fraudulent activity is not tolerated on our services, and we will act to protect the integrity of our platform.”

The lawsuit asks that the defendants stop profiting from selling likes, followers and engagement on Instagram, as well as violating Terms of Use and Community Guidelines. It also specifies that they be prevented from “Violating the Computer Fraud and Abuse Act and other California laws for distributing fake likes on instagram even after their access was revoked and their accounts were suspended.”

Facebook said that this lawsuit is part of its ongoing efforts to protect people and stop inauthentic behaviour on its platforms.

Instagram is now the place to go for travel inspiration according to new research. Research for easyJet has found that people are more likely to scroll through images of destinations on the popular social media app than they are to flip through travel brochures.

The survey found that 55% of 18 to 65-year-olds had booked trips based entirely on images of locations seen on Instagram. Over 2,000 people were surveyed with 32% saying that their biggest motivation when choosing a holiday destination was how their photos would look on the social media platform.

In fact, the drive to get great photos while travelling now means that people take, on average, 2,500 photos while on holiday for just a week. Many of these photos are taken in an attempt to get just the right shot for social media.

Head of Digital Experience at easyJet, Daniel Young, said: “As people’s attention turns to booking their summer holidays our research shows that they are not only turning to social media to showcase their travels but also to inspire their next adventure in the first place.”

With people posting beautiful images from scenic locations around the world, areas with photogenic backdrops have become a lot more popular. This means that more travellers are heading to locations like Santorini, Lake Como and the Benagil sea cave. Instagram is also helping to make travel destinations that were previously unpopular into must-visit locations.

Access to social media sites in Sri Lankan has been blocked temporarily by the government as it attempts to stop the spread of incorrect information following the terrorist attacks on Sunday, April 21st. The attacks killed 290 people and injured over 450, with a lot of information being shared across social networks.

Udaya R Seneviratne, presidential spokesperson, said that the Sri Lankan government had “taken steps to temporarily block all social media avenues” while investigations into the attacks are ongoing. Currently, Facebook, Instagram, YouTube, Snapchat, WhatsApp and Viber have all been blocked. However, Twitter is still operating as normal within the country.

The decision to block social media is to try and stop inflammatory content that could result in further violence. 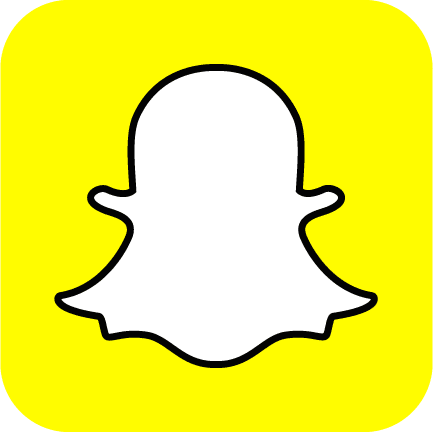 Following a decline in use, Snapchat has seen a small resurgence during the start of the year. The social media app has previously seen user declines, but it seems to have addressed the issues and has reported an increase of four million users during the first quarter of 2019.

Although user figures are still below Snapchat’s all time high of 191 million from a year ago (daily users now stand at 190 million), this result shows that things are improving. Triggered by a redesign that saw many users leaving the app, Snapchat’s decline issues could now have been fixed.

In addition to these positive results, Snapchat has also seen a 39% increase in revenue compared to the same period last year, posting revenue of $329 million in the first quarter of the year. According to chief executive Evan Spiegel, the apps ads can now reach more 13 to 34-year-olds in the US than Instagram, which is likely to have been responsible for some of the revenue surge. 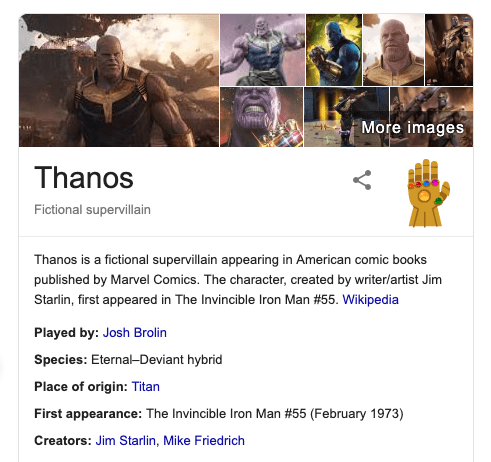 To celebrate the release of the final Avengers film (Avengers: Endgame) and the end of the third phase of Marvel’s cinematic universe, Google has released an entertaining Easter egg.

Users who search for ‘Thanos’ on the search engine will be shown the supervillain’s infamous Infinity-stone gauntlet on the right-hand side of results. Clicking on this will lead to the search results emulating the results of the snap at the end of Avengers: Infinity War, with half of the search results vanishing. 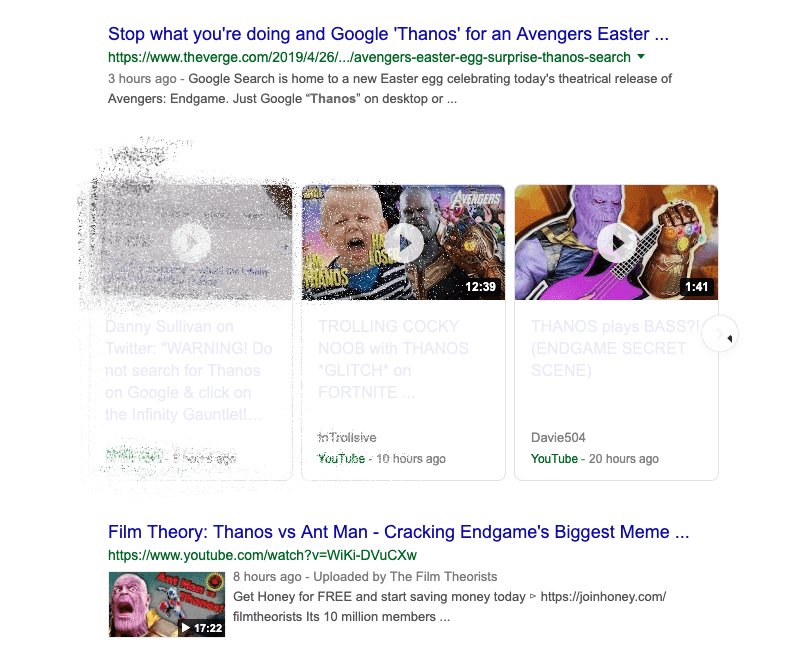 A number of results on the page vanish into pixelated dust, leaving blank spaces, while you can also see the results count fall to exactly half of where it started. Most importantly, the Easter egg doesn’t reveal any spoilers – something that is sure to make Marvel fans very happy.

This addition to Google once again shows how on top of the trends the internet giant is. It is also a great lesson for companies who want to make the most of events in popular culture to engage with their audience.