To start with, Twitter's VP of Design and Research has revealed five new features that could be added to the platform in the new year.

Pinterest has posted its Q3 results, which show massive growth in active users and revenue, showing that the platform is going from strength to strength.

Facebook reveals an issue with data from its Groups, which is likely to lower trust in the platform even more.

Finally, YouTube is launching a new look for its homepage for desktop and tablet users, which should improve usability.

We've explored all of these stories in detail with this week's roundup. 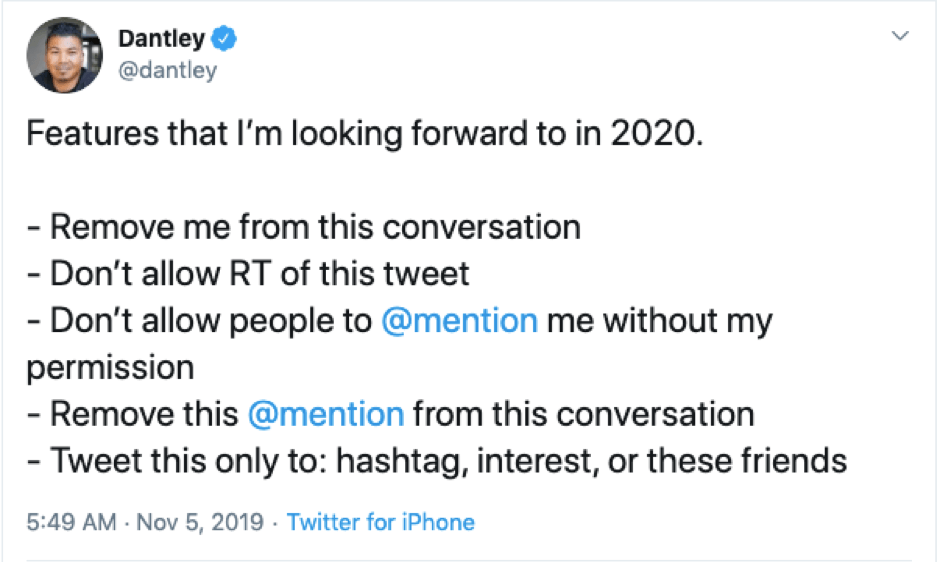 Usually, we don’t get a lot of visibility on changes that are coming to social media platforms in the future. Instead, platforms announce that they are testing or rolling out changes close to the day that they launch.

Twitter looks to be changing that slightly with the platform’s VP of Design and Research, Dantley Davis, sharing a list of five features that he’s looking forward to on the platform next year.

While there’s no guarantee that these features will become reality, it’s interesting to see the direction Twitter seems to be going. Sadly, there is no ‘edit tweet’ feature on the list, but there are some others that users may be excited for.

Remove me from this conversation

If you no longer want to be involved in a tweet exchange, this feature looks like it will solve the problem. You can currently do this in DMs, so it makes sense that Twitter rolls the option out across the platform.

Although you can currently mute a conversation that you are included in, this option would allow users to separate themselves completely.

This seems like a bit of a strange feature, as surely most people want their tweets to be retweeted. However, it could be helpful if you don’t want your tweet to be taken out of context – such as if it is a reply to someone else.

It will be interesting to see if users can turn off retweets of a tweet after it has been posted. This could allow people more control if their tweets are being shared by many people for the wrong reasons.

Don’t allow people to @mention me without my permission

Stopping people from being able to add you to a conversation unless you grant approval could be a good feature to help cut down on online bullying and harassment. It could also be a good safety feature against trolls if you don’t want to block them completely.

Remove this @mention from this conversation

I am assuming that this feature allows you to remove an @mention from your own tweets and not other people’s when you have been @mentioned. This could come in handy if you’ve @mentioned the wrong person or if someone wants to be removed from your thread on Twitter.

Tweet this only to: hashtag, interest, or these friends

This feature would allow people on Twitter to manage their audiences and add an element of privacy that isn’t quite DMs. This would enable more closed discussions and stop you from spamming the feeds of other followers when you are discussing something that won’t interest them. It could also enable users to stop showing their tweets to individuals without needing to block them.

All in all, these features all seem like good additions – that is if they come to fruition. However, people still want an ‘edit tweet’ to grant total control over what they post. It will be interesting to see if and when these features are rolled out to the platform. 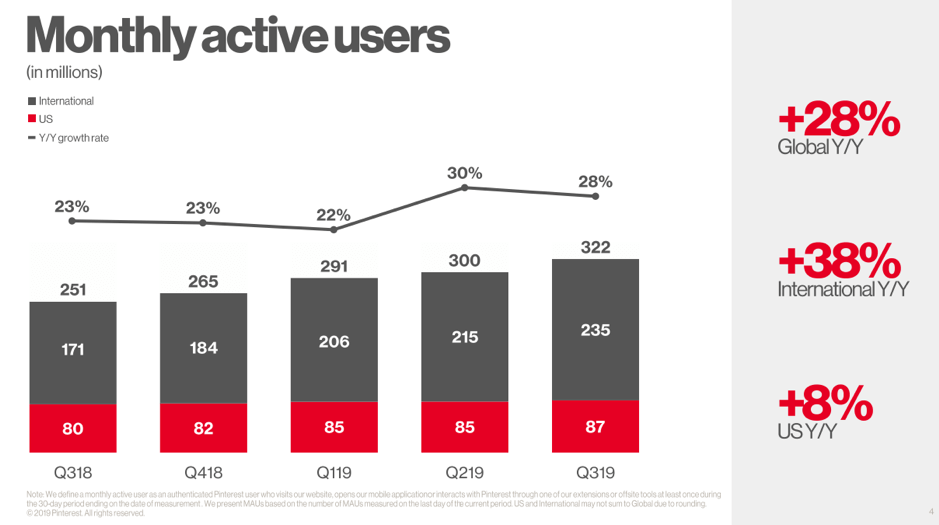 Pinterest has released its Q3 performance update and has shown that the platform is going from strength to strength.

The quarter saw the platform acquire 22 million more monthly active users, meaning its total monthly active users now stand at 322 million. Compared to last year, this is a 28% increase, although it is a smaller YoY growth than seen in the previous quarter, which stood at 30%.

As well as strong growth in monthly active users, Pinterest has also reported impressive results in terms of revenue. The average revenue per user has seen a global increase of 14% YoY, this splits down to a rise of 26% in the US and 127% internationally. Looking at overall revenue, Q3 saw a 47% increase compared to the same period last year, bringing revenue to $280 million.

According to Pinterest, it’s recent focus on e-commerce is seeing better results. More retailers are using the platform’s product catalogues and are using Pinterest to showcase goods through Pins.

Pinterest said: “We made Pinterest more shoppable in Q3 by uploading 75% more merchant catalogues than in Q2, expanding Shopping Ads internationally and working with commerce platforms, including Shopify, to introduce merchants and advertisers onto the Pinterest platform.”

With the e-commerce options performing so well, it’s safe to assume that Pinterest will make on-platform purchasing an even bigger focus in the months to come.

Facebook has discovered yet another data breach, this time relating to its Groups. According to the Facebook Developer Blog, a flaw in its Groups API Means that up to 100 app partners may have been able to access group member information, such as profile pictures and names, that related to group activity.

Facebook said in the blog: "Before April 2018, group admins could authorize an app for a group, which gave the app developer access to information in the group. But as part of the changes to the Groups API after April 2018, if an admin authorized this access, that app would only get information, such as the group’s name, the number of users, and the content of posts. For an app to access additional information such as name and profile picture in connection with group activity, group members had to opt-in."

This guide is for anyone who believes they need a more strategic approach to social media by better aligning their social media strategy with their marketing goals.

While the changes were meant to reduce access that apps had to information after April 2018, a flaw was recently discovered. It seems that some apps retained their access to group member information after this change came into effect. While Facebook has now removed this access, the apps have had access to information they shouldn’t for over 18 months.

The blog went onto explain that up to 100 developers may have been able to access the information since the restrictions were put in place. At least 11 app partners accessed this information in the 60 days before the breach was announced and Facebook is asking them to delete any information they have retained.

This is just the latest in a string of data issues that Facebook has experienced and is likely to further affect the low trust people currently have in the platform.

YouTube has updated its YouTube homepage for desktop and laptop visitors, introducing more features aimed at helping users find more videos they’ll be interested in. As well as coming with an updated look, the homepage also boasts additional features.

In a blog, YouTube shows that the new format gives each preview panel more room, providing more context on each video, which will allow users to better see which videos are of interest. The videos will be shown with larger thumbnails and longer video titles, as well as higher resolution video previews.

YouTube has also removed some of the content shelves previously shown on the homepage, although it notes that there will still be rows of videos for key content types, such as breaking news. It has also added an “Add to Queue” option so users will find it easier to create playlists, although it’s worth noting that videos in a queue won’t be saved when the browser is closed.

The platform is adding the “Don’t Recommend Channel” option that was introduced to its mobile app earlier this year to its desktop version. This allows users more control over their recommendations, so they don’t see videos from channels they aren’t interested in.

While the changes aren’t huge, they should help improve the platform’s usability by making navigation easier. They will also better show content to users, helping them explore what is on offer.