This week has brought with it the news that the UK is seeing great rates of desktop ad viewability, with viewability reaching a record high in the second quarter of the year - great news for digital advertisers!

In other advertising news, after months of testing, Google is set to start rolling out its new first-price auction rollout, which has reportedly had good results so far.

Facebook is also making changes to ad policies, this time relating to political ads and those that tackle social issues. These changes are aimed to provide greater visibility over political advertising ahead of the 2020 US elections.

Our final big news story is the week is that YouTube has provided an update on its efforts to remove inappropriate content from the platform, with thousands of hate speech videos being taken down.

Read more details about each of these news stories with our news roundup below.

Desktop ad viewability in the UK has reached a new high in the UK, according to the latest Ad Science Media Quality Report. The reports found that in the first quarter of the year, desktop display visibility increased to 70.9%, which is an increase of 7.5% compared to the same period last year.

Ad viewability took into account instances where 50% of the ad unit, or 30% for large display ad formats, is in view on a desktop for one continuous second. It also includes 50% of video ad units being in view for two continuous seconds.

However, when it comes to mobile app engagement, the UK shows the strongest figures. Mobile in-app environments in Q1 within the UK drove the highest in-view duration at 22.52 seconds. Comparatively, desktop display ads in the UK managed 21.67 seconds, with is below the global average of 23.53 seconds.

“When compared globally, the UK appears consistently in the top rankings, showcasing the current high quality of UK digital advertising. It’s thanks to this level of granular and global insight that brands can protect their advertising investments in a fragmented ecosystem and ensure they drive the greatest return.”

Google is set to fully rollout out its first-price auctions to Google Ad Manager following seven months of testing. The new format is designed to provide greater transparency for publishers and unify the ad auction.

According to a blog post written by Jason Bigler, Google’s director of product management, when compared to second-price auctions, the first-price auction format has had a “neutral to positive impact” on publishers’ ad revenue.

Mr Bigler also said that Google had found evidence that this ad format has created a more competitive market that led to “third parties (Demand Side Platforms and Ad Networks outside of Google) and indirect line items (like those from Header Bidding implementations) winning an increased share of impressions.”

“Based on these results, we are confident that moving to first-price auctions in Ad Manager will ensure a fair and transparent marketplace that benefits the health of the programmatic ecosystem. That’s why, starting next week, we’ll continue with the full roll out of first-price auctions to all partners using Google Ad Manager, with the expectation to complete the transition over the next few weeks,” he wrote.

First-price auctions will be rolled out to all Google Ad Manager partners from next week (September 9th), with the rollout expected to be completed by the end of the month. 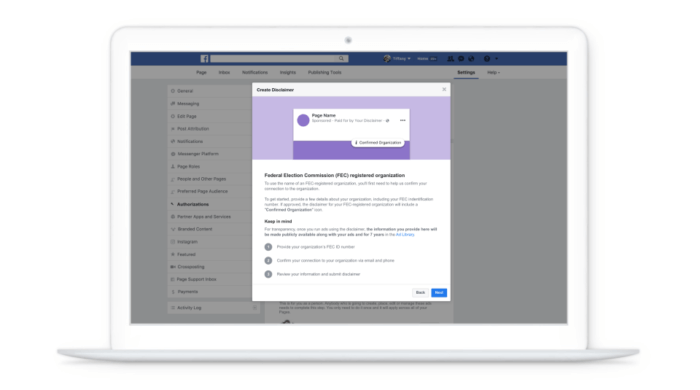 Facebook has updated its ad policies ahead of 2020 elections, introducing stricter rules for political advertisers and those running electoral or social issue adverts on the platform. The policies were introduced on August 28th and apply to all ads across Instagram and Facebook.

Changes to policies include new disclaimer requirements for political advertisers, as well as an updated list of social issue topics in the US that the policies cover.

From the middle of this month, Facebook will require advertisers running political, social issue or electoral ads to provide more information about their organization. This can include:

If political advertisers do not comply with these additional requirements they will see their ads paused from mid-October.

Under Facebook’s changes, the labels used for political, electoral and social issue ads are also being updated. This means that when an Instagram or Facebook user clicks the ‘I’ icon to get more information on the advert they are seeing, they will find the information that Facebook has confirmed alongside the “Confirmed Organization” or “About This Ad” language.

This means that the EIN or FEC number will appear with the “Confirmed Organization” label with the “About this Ad” section will show the phone number and email address of the organization running the ad.

According to Facebook, this will help people assess the legitimacy of an organization more easily, as well as ensure they are able to raise any questions or concerns they have about any political ads.

Facebook has previously assigned social issue ad topics to 20 subjects. It is now adding a further 10 categories for the US, refining the topic areas and allowing for future category evolution.

The new categories are:

All of these chances are designed to improve transparency when it comes to political ads and ensure that advertisers are not using any ‘black hat’ techniques to influence opinion as the 2020 US elections loom. Any organization overseeing social media marketing for organizations that are attached to political causes need to be aware of the changes in order to ensure their ads are compliant.

YouTube has outlined how it is seeking to improve its efforts to remove inappropriate content from the platform. This follows on from YouTube’s CEO Susan Wojcicki releasing an update on the platform’s efforts to address a number of key areas of concerns last month.

The platform said: “We’ve been removing harmful content since YouTube started, but our investment in this work has accelerated in recent years. Because of this ongoing work, over the last 18 months, we’ve reduced views on videos that are later removed for violating our policies by 80%, and we’re continuously working to reduce this number further.”

One of the biggest concerns for YouTube is hate speech, with YouTube has made headway on addressing. According to the platform, it spent months developing a hate speech policy and provided staff with the training and tools to enforce it. 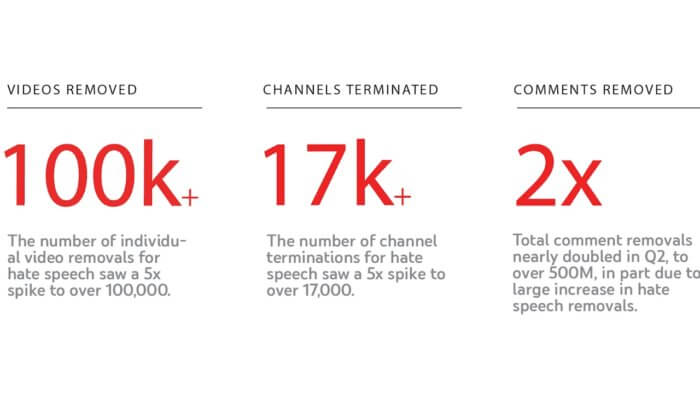 The policy was launched in June and YouTube’s machine detection of hate speech will improve as its teams review and remove more content. So far, the hate speech policy has led to over 17,000 accounts being removed from the platform.

Other noticeable updates include: