By Expert commentator 31 May, 2019
Essential

This week, Facebook has updated us on how it is enforcing its Community Standards with its third report. The report includes new data in a bid to make sure its enforcement is more transparent.

New research has revealed that brands who form emotional relationships with customers are likely to see better brand loyalty, showing that the human element and storytelling really do benefit companies.

Facebook has launched its new playable ads, aimed at providing users with a trial of advertised mobile games.

As Coca-Cola announces working with Netflix on Stranger Things season three, a study has found that most subscribers are totally against ads being added to the video streaming service.

Finally, Twitter has announced a new feature. Those who live stream will now have the opportunity to add audio-only guests to their video, which could be used in a number of ways.

Learn more about all of this with our news roundup. 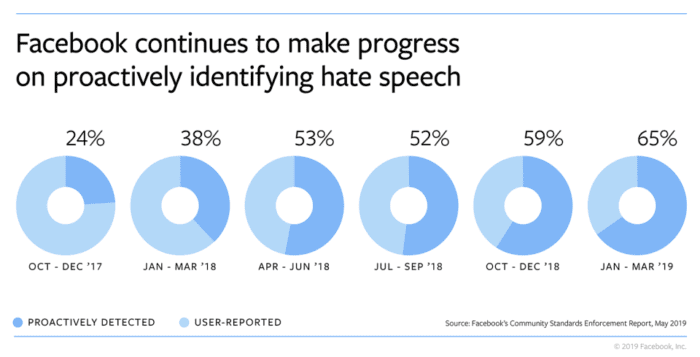 Facebook has published its third Community Standards Enforcement Report, which covers Q4 2018 and Q1 2019. The report includes new data points to provide an improved understanding of the process that Facebook goes through when removing content.

The social media giant has now added data relating to content appeals and how much appealed content was restored. This is the first time that Facebook has included this information.

In addition to this data, it is also including data on regulated goods, detailing how the platform is performing when it comes to removing attempts to sell illicit goods, with a focus on drugs and firearms.

These additions to the report mean that the Facebook report now includes metrics across nine policies within its Community Standards. These include/ adult nudity and sexual activity, child nudity and sexual exploitation, bullying and harassment, fake accounts, regulated goods, hate speech, spam, global terrorist propaganda and violence and graphic content.

Facebook has admitted that its enforcement of Community Standards isn’t perfect and so it is making its process for dealing with any mistakes a bit more transparent with its report. The data will show how much content was restored following user appeals and how much it restored on its own. 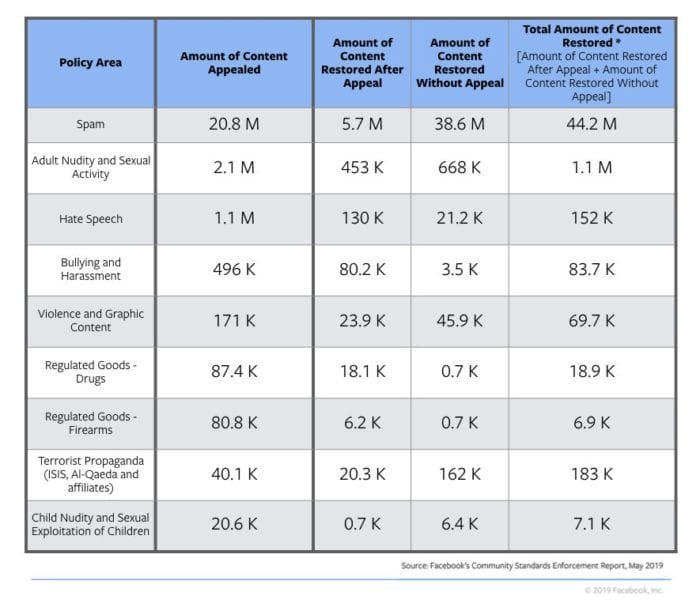 The platform can restore content without an appeal for a number of reasons, including:

While Facebook has had policies about drug and firearm sales in place for years, this is the first time this information is being included in the report. While it has used a range of methods when dealing with this type of post previously, it introduced AI in the summer of 2018 to better identify content that violates its regulated goods policies. 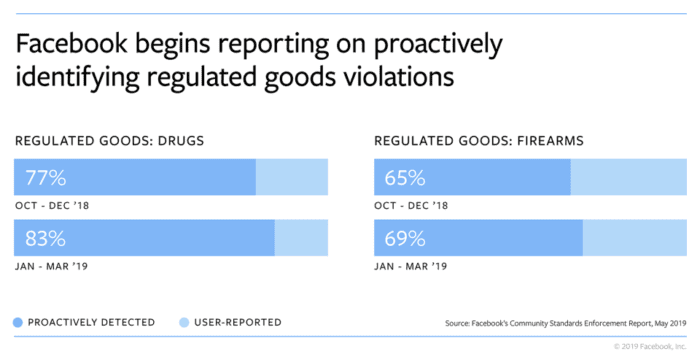 According to Facebook, this has enabled it to take more action, usually before people have had to report content. The platform reports that it took action on around 900,000 pieces of content relating to illicit drug sales in Q1 of this alone. Of these, 83.3% of the content was detected proactively.

Facebook hopes that this extra information will help it fulfil its promise to become more transparent when it comes to how it develops its policies and how it measures its enforcement of them.

Brands that are able to form emotional bonds with customers are more likely to have a high customer retention rate, according to new research. A study from Deloitte Digital has found that appealing to customer emotions directly relates to trust and repeat custom.

According to the findings, companies who appeal to customer’s emotions on four levels – data boundaries, connection, loyalty and consistency – have a better chance of developing meaningful and beneficial relationships.

Some 62% of the consumers surveyed said they felt a relationship with a brand. Of these, 76% said they have stuck with that brand for four years or more due to the fact they trust it. In fact, trustworthiness is the most important factor when it comes to brand favourability, with 83% of respondents selecting it.

After trustworthiness was integrity (79%) and honesty (77%), showing that transparency is a vital aspect of cultivating customer relationships. This means that building trust is the first step in cultivating lasting relationships with consumers.

Building this trust can then aid in the development of future relationships, as customers who trust a brand are more likely to recommend it. In fact, just under half (44%) of those surveyed said that they have endorsed a product based on emotional criteria. Of these, 60% said they use words like “happy”, “love” and “adore” when recommending brands they feel a connection to.

Timothy Greulich, experience management practice leader at Deloitte, said: “Customers and consumers are longing for human connection with the organizations and people they tend to do business with. When pressed on what those connections look like, they described their relationship in the context of a friendship, more importantly, a two-way relationship, where both parties are responsible and engaged in the health of the friendship/relationship.”

Another factor that influences customer trust is how brands use consumer data. The research found that three-quarters (75%) of customers want a brand to know why a purchase was made and over half (52%) want that brand to know they are satisfied with their purchase. However, 35% don’t want brands to search their browser history and 59% don’t want brands responding to social posts, whether they are negative or positive.

While issues like privacy breaches can cause an end to a consumer’s relationship with a brand, the way that a brand reacts to the situation can make a huge difference. Some 77% said they would continue buying from a brand if they are offered an apology that seems genuine when an issue arises.

This goes to show that perfection is not the key to creating and maintaining customer relationships. If a brand is able to appear human, trustworthy and honest while also holding their hands up when something goes wrong, it is likely to lead to lasting relationships that offer high ROI. 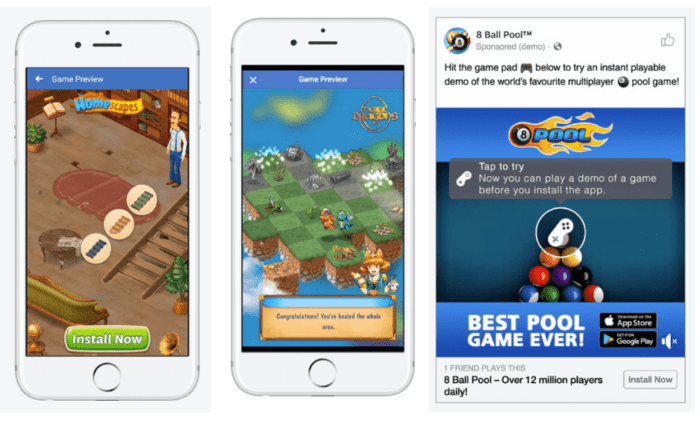 Facebook is bringing a new add type to its social media network that could provide a boost to mobile games. Facebook users will now be able to trial a mini version of a mobile game through its new ad format, allowing them to see if the game is for them before downloading it.

According to Facebook, people were 60% more likely to open a mobile game they had downloaded if they had the chance to test a playable ad first compared to those who downloaded without first testing the game.

Shown through the platform’s Audience Network, the playable ads will be available in rewarded video and interstitial formats. Facebook will also introduce new tools to measure the performance of playable ads, allowing advertisers to see when someone starts engaging with the ad, how they are engaging with it and how much outbound traffic there is. According to the platform, this will help improve the games as advertisers will be able to track where people drop off.

Each ad will include a lead-in video that plays while users are scrolling through their feed. To separate these ads from other videos, they will have a game controller icon overlay, along with a tap to try CTA. Once users tap the video, they can then play the demo. When the demo is complete, another CTA will take people to the App Store or the Google Play Store.

Facebook will also be offering vertical video and zip file support, which will be available in the next few weeks.

Brits will leave Netflix if ads are introduced

People are firmly against subscription video on demand (SVOD) services like Netflix introducing adverts, new research has found. Research consultancy Differentology found that just under three-quarters (72%) of TV subscribers in the UK are totally against these services introducing ads.

If Netflix were to show any sign of introducing ads to the service, the research found that 23% of subscribers would upgrade to a premium model that offered an ad-free experience. However, a greater number (39%) said that the introduction of ads to Netflix would lead to them cancelling their subscription or moving to another service that didn’t feature advertisements.

When you consider the fact that 66% of the 2,029 respondents said they have never cancelled an SVOD subscription, it shows that users will do all they can to avoid being subjected to adverts. However, it could also mean that the number who would cancel is slightly inflated, especially as 32% of those who have cancelled a service said they have subscribed again within less than three months.

Head of insights at Differentology, Dan Brilot said: “The mix of low-rolling monthly subscriptions, in addition to episodic content, means SVOD has unusually high levels of loyalty as a category, with one in six claiming to always go to an SVOD service first when deciding what to watch.

“The figure rises significantly for 16-to19-year-olds, with over half (53%) never going to live TV first, while 17% of the age groups claim the number of paid SVOD subscriptions in their household will increase over the next three years. New entrants, such as Britbox, seem set for success, provided the price point is in line with current SVOD providers.”

The research findings follow on from the recent announcement that Coca-Cola is integrating with Netflix’s Stranger Things season three, which will see the launch of New Coke, suggesting that this could be the direction that the streaming service is going. 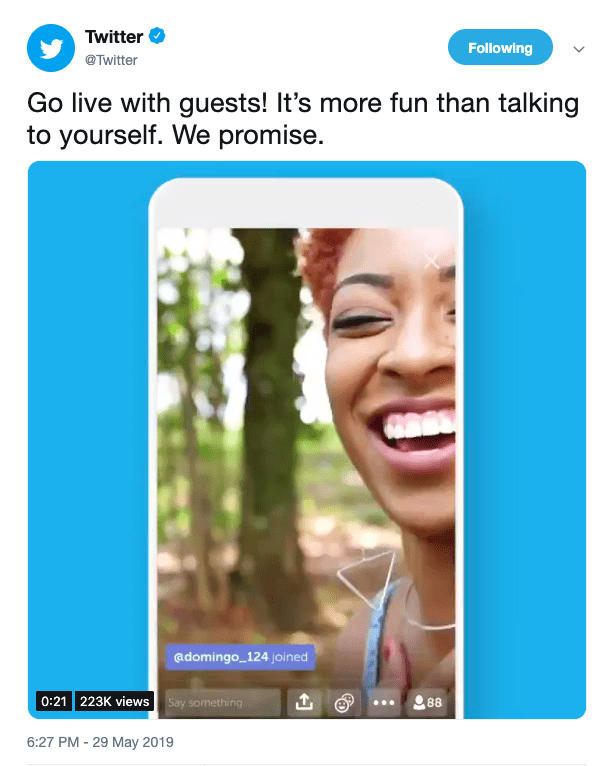 Twitter has announced its new live-streaming option that will mean users can add audio-only guests to their streams. Tests for the featured were spotted by some users earlier in May but the new Live Guests option is now being rolled out across the platform.

The feature means that viewers can join in a conversation if the streamer grants permission. People can join a stream with their audio only, with their avatar appearing on the screen. This feature could be used to host question and answer sessions, or interviews live on Twitter.

The platform said of the new streaming feature: “Conversations on Twitter can take place in many ways, and our latest update to live video brings another dimension to how you can discuss what’s happening. Starting today, your Tweets are going £IRL and now you can hot a live video and invite up to three people as guests. Those you allow to join can be heard by everyone and can drop off at any time.”

While the option is a good step forward for Twitter, it seems to be slightly behind other social media networks. Instagram and Facebook Live already allow split-screen live streams with a guest, which is something Twitter doesn’t allow. However, the ability to invite up to three guests could be enough of a difference to bring people to this feature instead.