Following the addition of a new Speed Report in Google Search Console, Google has announced that it is set to start adding warning badges to sites with slow load speeds as a signal to users. This could ultimately lead to other 'badges' rewarding sites that offer good experiences.

Facebook is aiming to make donating and fundraising on its platforms easier ahead of the holiday season by releasing several new tools.

A new report has found that consumers don't believe that big brands or social media influencers have any credibility and that they support social issues purely for profit.

New data reveals that spend on traditional TV advertising is declining with more people switching to streaming services. However, this could provide some opportunities for marketers.

Finally, Instagram looks set to take on TikTok by copying some of the newer apps functionality. A new feature is being tested within Instagram Stories that could help the platform keep hold of younger users.

Our news roundup has all the details on each of these big stories. 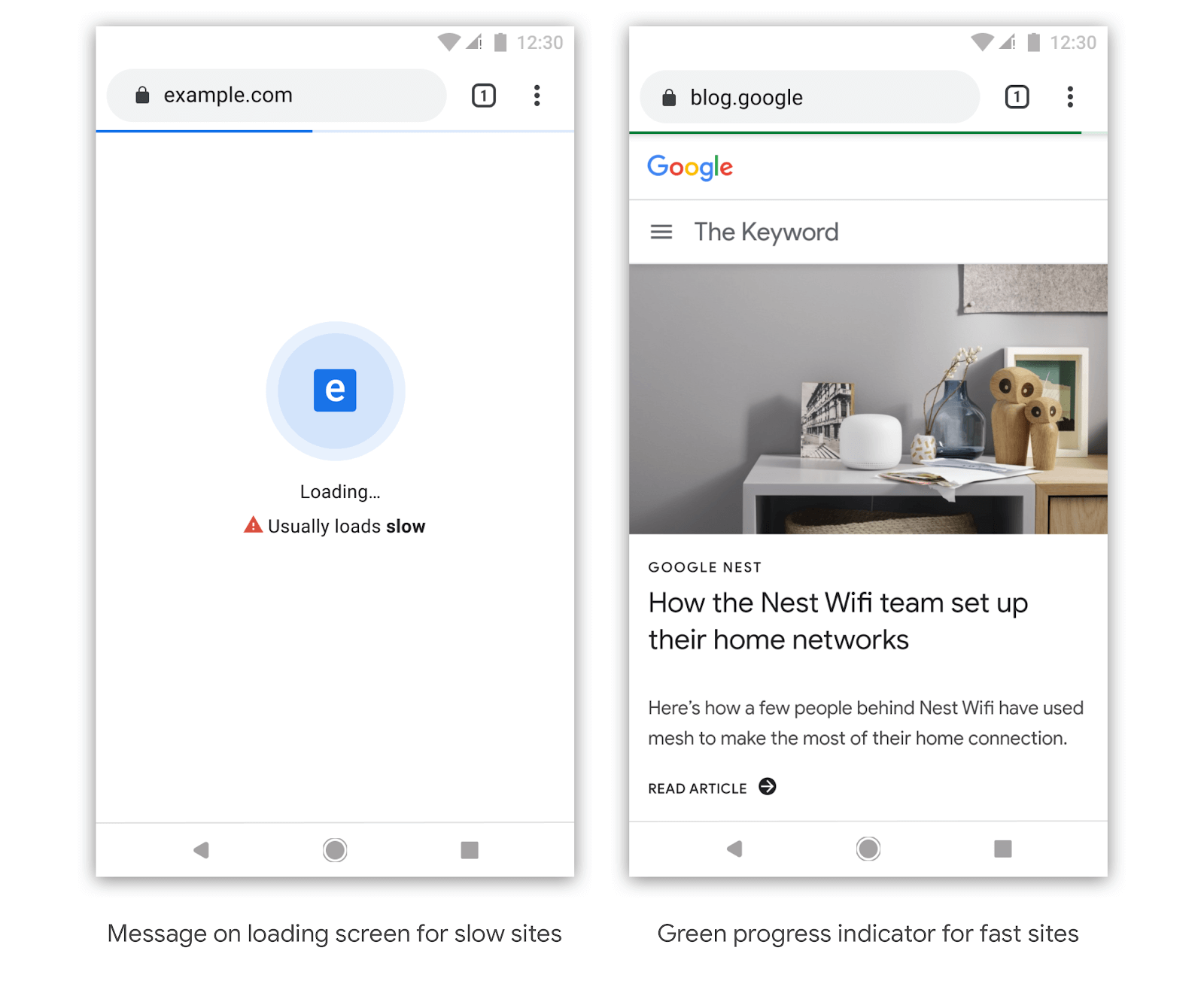 Google to add a warning to slow sites

Site speed is set to become more important than ever as Google unveils new plans to add warning indicators to pages with slow load speed. The company announced in a blog that its new plans will see the warning indicators added to Chrome both on search results and load screens if slow loads speeds are detected.

According to Google, the decision is about improving user experience, with the warning aimed at helping users understand that a site may load slowly. The search engine will also be rewarding sites that deliver a fast experience, which means that slow websites could see click-through rates from search decline.

Google said: “Chrome may identify sites that typically load fast or slow for users with clear badging. This may take a number of forms and we plan to experiment with different options, to determine which provides the most value to our users.”

The badging is being designed to show which sites are slow in general, with Google looking at historical load latencies. However, this may be expanded in the future to include badges that identify sites that may be slow for a particular user based on their device and network conditions.

The first wave of these badges will look at Chrome surfaces, including the loading screen, loading progress bar and the content-menu for links. This should help provide information on site speeds before a user clicks onto that site.

These plans will be rolled out gradually and will based on criteria that is based on Google’s research. In the long-term, Google hopes to define badging for high-quality experiences, which could be based on more than just speed. This means that sites need to look at all aspects of their user journey to ensure they are offering the best experience possible or they could risk being labelled in a negative way.

Facebook has released a new set of tools for aiding with fundraising and cause awareness in a bid to help non-profits on the platform. Releasing these ahead of the holiday season, Facebook said it is aiming to help it be easier for people to give back at in more impactful ways.

Announcing the news in a blog, Facebook said that as well as matching donations to non-profits on Giving Tuesday, it is also launching new products to “make giving back seamless” on its apps.

Alongside matching up to $7 million in donations to US non-profits, the social media platform is also working on a feature that will allow people to donate their time rather than just money. The feature will help people sign up to volunteer, allowing them to give back to organizations they care about in another way.

On top of this, it is launching fundraising stickers in Facebook Stories in order to help people encourage their friends to get involved. This feature will work just like other stickers in Stories, meaning it will be quick and easy to add them in order to promote a specific non-profit or a personal fundraiser. This feature was just used by the Latin GRAMMYs to support the Latin GRAMMY Cultural Foundation. 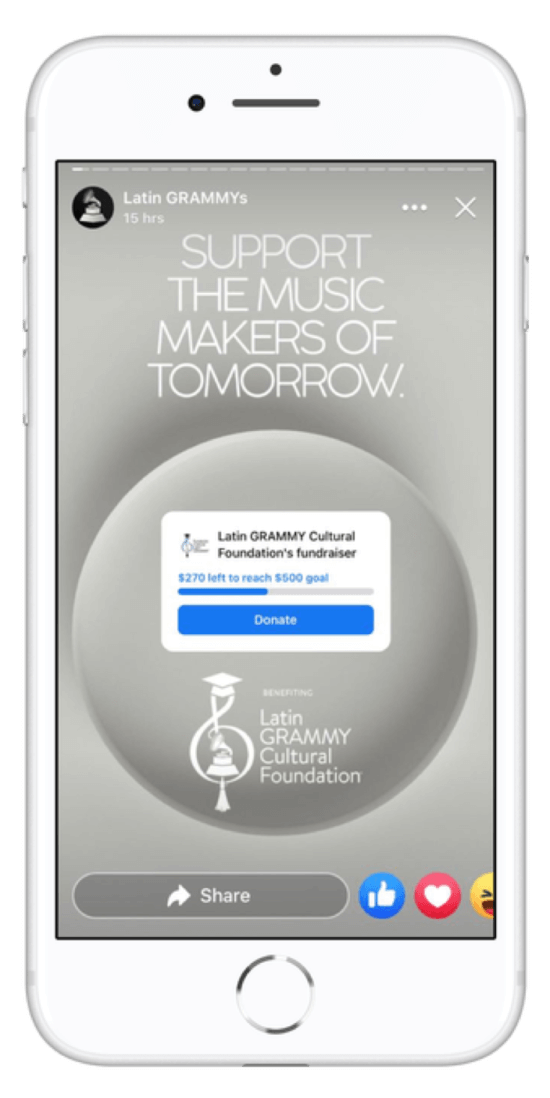 Another feature being added to the platform is charity live streaming. This feature was tested around a year ago, with Facebook adding it for use by a group of gaming creators in the US. The test led to 25 gaming creators raising over $180,000 for charity.

Facebook is now launching charity live streaming tools for all Gaming Level Up creators and partnered creators in areas where it offers fundraising tools. This means that during a live stream, creators can now choose non-profit causes to promote, set donation goals and include a donation progress bar, allowing people to donate to the organization while watching the stream. 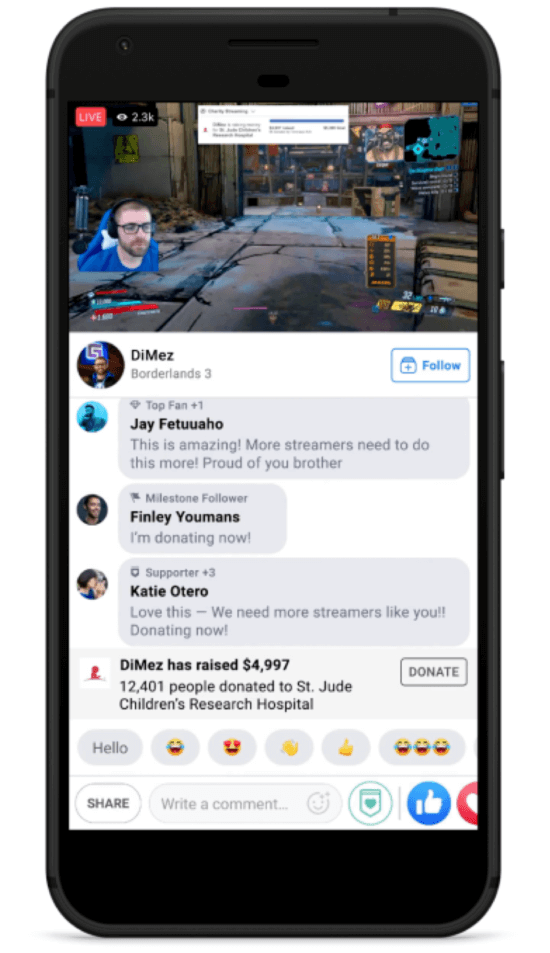 As well as features on Facebook, the company is also adding one to Instagram. Non-profits with business accounts will be able to add a donate button to their profiles, allowing them to raise funds directly from the app. This should make it easier to drive people to donate, as they won’t need to go to a different site to do so.

As well as making it easier to donate, Facebook has announced that 100% of the money raised through donate buttons and fundraisers in Facebook and Instagram will go to the organizations. This means the company isn’t taking a cut of donations given on its platforms. 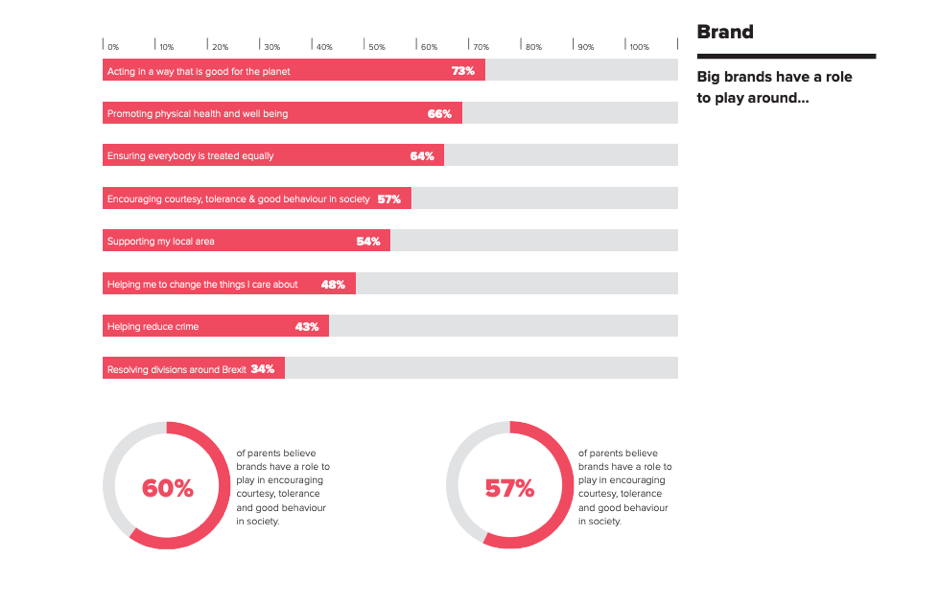 The majority of consumers in the UK don’t think that Amazon, the BBC, Google or social media influences have any credibility. A new study from Mindshare titled ‘Power to the People’ reveals that 57% of consumers believe that brands only associate themselves with good causes for positive publicity.

On top of this, the report found that 70% of consumers don’t think that brands should be able to get away with virtue-signalling unless they are exhibiting behaviour that backs it. This suggests that although people want brands that stand for something, companies need to ensure that they are coming across as authentic and are backing up any campaigns with action.

Despite most people thinking brands take a stance for their own reasons, 53% said that some wider good can come of it in the end. However, these beliefs are starting to impact buying behaviour.

A third of all consumers said that they had stopped buying from a company with values they didn’t agree with. This trend is more prominent among younger consumers, with 42% of 18 to 34-year-olds saying the same, showing that brands need to start considering their values a lot more.

The study shows that, as far as consumers are concerned, the responsibility for values that do social good is firmly on the shoulders of brand owners. Two of the big areas highlighted that brands should tackle are the environment and promoting health and wellbeing, with 73% and 66% of consumers agreeing, respectively.

When calculating credibility scores by subtracting negative sentiment from positive sentiment, it was only charities that ended up recording final positive scores. This suggests that it is harder than ever for brands that sell products to be seen as having credibility.

Amazon scored -12%, Google -7% and the BBC scored -2%. Magazine and newspaper articles scored a low -18% along with MPs, reflecting the current mistrust among consumers for politicians and the media.

In terms of influencers, 60% of consumers who follow them believe they have no credibility. Instead, the research found that it is other shoppers who consumers trust the most to influence their purchase behaviour, showing the power in social proof and online reviews.

Some 61% said that reviews give them an objective way to judge how good a product is while 50% said they influence buying decisions. A further 35% said they often end up buying products they aren’t familiar with due to good reviews. All of this means that brands could benefit – even if they have a low credibility score – from leveraging customer reviews both on their website and other channels.

Mindshare’s head of research and insights, Julia Ayling, said: “The findings of our Power to the People research indicate that there is a huge opportunity for businesses and brands to play a wider role in society, but their contribution must be credible and add value in a genuine and sustainable way.”

This year will see traditional TV ad spending in the US declined by around 3% following a long-term spending fall. According to eMarketer, TV ad spending peaked in 2018, coming in at $72.40 billion but will not continue to decline as all formats of digital ad spending now account for more than half of overall ad revenue.

In comparison to TV’s fall, digital video formats are seeing more spending, with Connected TV (CTV) due to reach almost $7 billion this year. This is estimated to further increase to $12.5 billion by 2022. According to the latest figures, it is expected that advertisers will spend almost 5% of paid media budgets on CTV advertising. 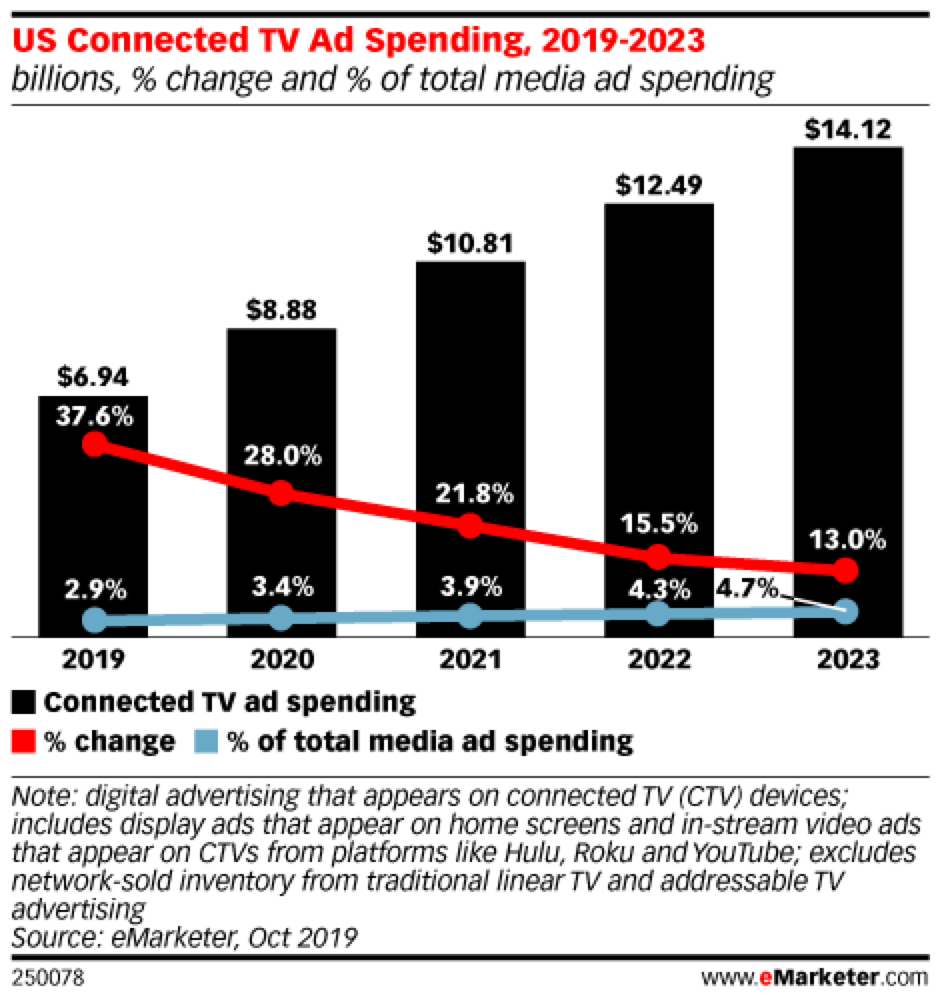 According to eMarketer, there are 86.5 million pay-TV subscribers in the US, which is expected to fall to 72.7 million by 2023. It also projects that this year will see 22 million US households get rid of cable this year. This coincides with the amount of time people spend watching TV falling, although more people are watching other forms of video.

On the plus side, as ad spending rates and audience numbers continue to decline, TV advertising could end up being cheaper for marketers. This means it could become more affordable for brands to make use of the powerful awareness-building and branding medium. 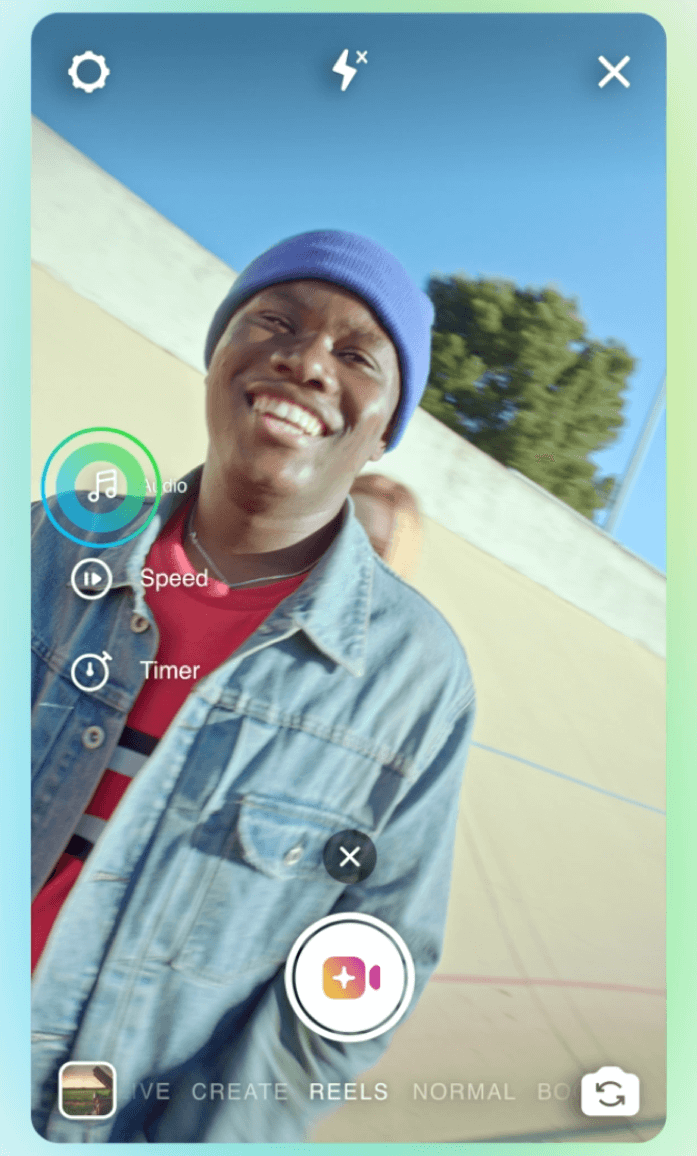 Instagram looks to be taking on TikTok with its latest feature. The social media platform has added ‘Reels’ to its app, replicating a key aspect of TikTok within its Stories offering.

Just as with TikTok, Reels allows users to film short videos and remix them before them posting them to their Stories. The videos can include music and can be edited in a number of ways, such as altering the playback speed and creating scene transitions through ‘ghosting’. The aim seems to be to stop Instagram’s younger users from moving away from the app in favour of TikTok.

At the moment, Reels is only going to be made available to Instagram users in Brazil, but after the initial test, it is highly likely that Instagram will start to roll it out. The feature will be available within Stories Camera, making it easy to use.