What is Programmatic Marketing?

How are programmatic marketing and digital display advertising defined and what are the opportunities for all types of business?

In 2020, 69% of all digital media* will trade programmatically amounting to $US122 billion.

This growth of programmatic is certainly impressive, with the Zenith statistics showing how ten years ago programmatic accounted for less than 10% of Programmatic marketing. 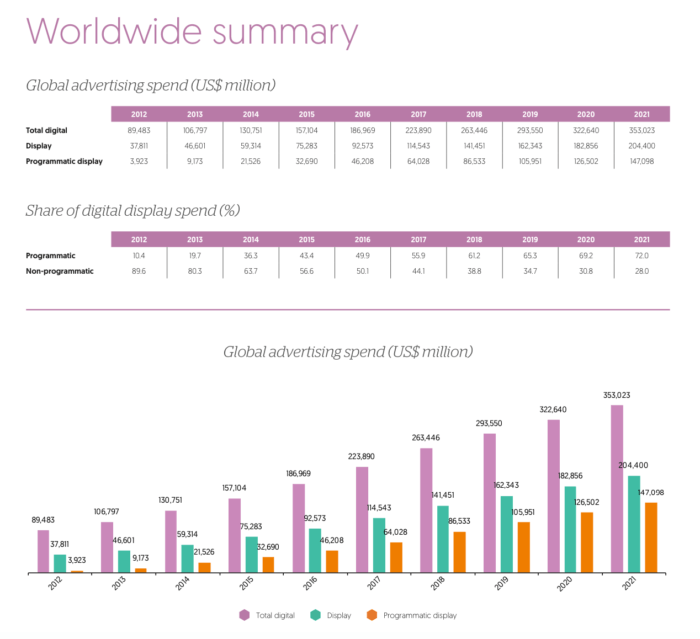 However, these charts and the definition of digital media and programmatic is also misleading as we'll explain in this post. As someone who has worked in digital marketing since the mid-1990s, I'll level with you and say I find Programmatic a challenging term to define since it doesn't include what you think it might.

So, what exactly is programmatic?

I'd like to keep it simple, but, in the case of programmatic marketing, it helps to understand what it isn't... I'll highlight the questions you should ask when anyone is discussing programmatic research starting with...

A simple definition of programmatic advertising from the Display Trading Council is :"

"The use of automation in buying and selling of media".

Great, simple definitions are good, so we know that programmatic marketing is when people aren't involved in ad buying. We have to be careful here since it refers specifically to paid advertising, not other forms of automation such as web personalization or email marketing which are part of marketing automation. So we can answer this question?

Programmatic has rapidly developed since it's much more efficient for advertisers and media agencies who manage their budgets. Before Programmatic, a publisher had to call an advertiser, negotiate terms for different value of ad inventory, and use a manual insertion order process before buying. Today, ad exchanges have entirely changed the process of selling and buying in programmatic advertising.

Q. Does Programmatic marketing involve all automation of marketing, i.e. is it the same as Marketing Automation?

Answer: No, it's limited to paid media buying, i.e. advertising and is typically arrange through ad exchanges or marketplaces which we'll explain shortly.

So, to repeat, it's best we talk about programmatic advertising. We need to qualify it as display advertising since...

Answer: No. Programmatic advertising DOESN'T include all paid search (and classified). This is significant since eMarketer research tells us that Google Ads (including YouTube) is the largest online ad seller. So when we see figures at the start of this article that programmatic accounts for most of online advertising it's misleading.

But this definition suggests that it includes both programmatic ad exchanges and when ads are bid for in auctions such as Google Ads Pay Per Click in search engines, on the Google Display Network and on YouTube right?

Unfortunately, it's not that simple. If we return to the definition from the Zenith research the definition of paid media is: * Digital media refers to all forms of paid-for advertising within online content, including banners, online video and social media, but excluding paid search and classified advertising. So this means that programmatic advertising doesn't typically include Google Ads bidding. This is confusing since as you'll know Google Ads includes both ads placed in response to queries in search engines AND YouTube Ads and Google's display network.

Let's now consider where you can buy programmatic ads with this question...

Answer: Yes (although we'll see that some ad exchanges are private)

Ads were (and still are) also sold through ad networks where publishers had no control on price. Today ad exchanges unite publishers, advertisers, agencies, and networks in one place enabling them to sell/buy ad impressions in a fully-automated process.

It's easier to read it from the right, to understand the process, starting with the consumer:

Answer: Yes. This is another characteristic of programmatic advertising. It's why the diagram refers to RTB or real-time bidding and increasingly header bidding which is another term that's part of understanding Programmatic display advertising.

So, to extend our definition, we define Programmatic display advertising as:

Which leads us on to the next question...

Answer: Not necessarily, but it's an increasingly common technique used by large advertisers since 2016.

Header bidding involves the website media owner or publisher placing a line of JavaScript in the website’s header. When a page on the site is loaded, the code reaches out to the supported ad exchanges or supply-side platforms (SSPs) for bids before its own ad server is called. Bidding is essentially simultaneous, instead of sequential, and focuses on all available impressions, not just the ones available after direct sales.

The process is explained by this visual from AdopsInsider : 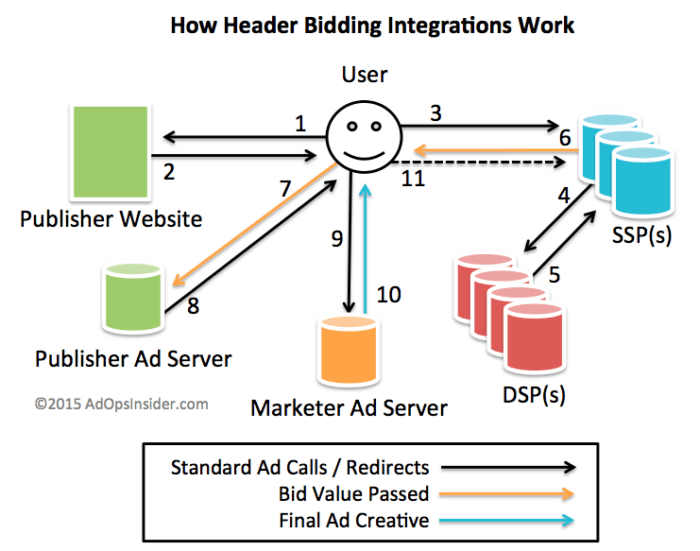 They explain the process as:

To understand how this works, Header bidding Chrome extensions like BidFilter can show bidding times and bids for a publishers website: 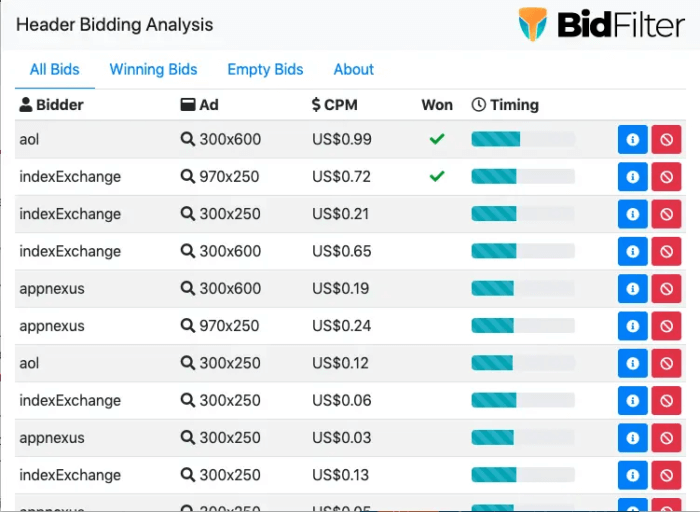 Q. So programmatic is only about buying via ad marketplace platforms via auctions?

Answer: No. This is what is popularly thought of as programmatic, but media can also be bought direct from advertisers and through private marketplaces. As this figure from the IAB Programmatic Handbook (direct download) shows, there are two options on the right, private marketplaces and open Real-time buying exchanges (RTB) 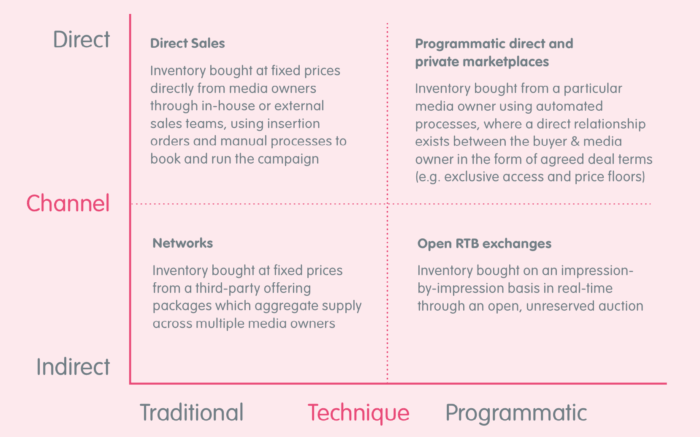 Header Bidding recommends these as the top programmatic ad exchanges for publishers to consider:

Google AdX, the largest programmatic ad exchange, conducts a first-price auction and sells display advertising space in real-time. It's the premium version of Google’s AdSense for larger publishers compared to AdSense which is used by smaller publishers.

'Programmatic Marketing' or advertising is a general term, so it's best to divide it based on whether it involves Real-time Bidding (RTB) or not. Often it is only considered to be real-time transactions to bid  This summary, also from the Magna Global report is useful to show the differences.

The opportunities of programmatic display?

The guide is designed to explain the key components of programmatic media buying to marketers.

For reference, these are previous Magna Global Programmatic Intelligence report gives forecasts for programmatic by format from 2014 to 2019. They estimate that by 2019 it will be 50% of all advertising, which is less than the Forrester estimate, but still a significant growth.

How does Programmatic Marketing work?

When anyone clicks on a web page that has advertising space that is configured for programmatic advertising, the publisher of the page puts up an ad impression for auction in an ad marketplace. The ad marketplace then runs an auction among advertisers interested in displaying an ad to that specific customer that just click on the page. There may be many advertisers competing in this auction, and whichever one ultimately is willing to bid the most wins the auction and then their ad is displayed to the customer when the page loads.

Because the process is automated and the maximum price each advertiser is willing to bid for the impression has already been programmed in, the auction can be completed within the milliseconds it takes for the page to load. Our simple infographic takes you through 6 steps that explain how programmatic marketing works.

What are the advantages of Programmatic Marketing?

Programmatic marketing opens up a series of opportunities, which would not be possible if ad placement was done manually, as it has been done in the past. It allows advertisers to procure digital media without having to pre-negotiate a price, so they pay only for the relevant impression that they actually receive. They can also sign up for a minimum number of impressions or a minimum budget, which makes digital advertising more flexible, and they can buy digital media across publishers, which reduced administration costs.

But the opportunities are much greater than just making ad buying easier and more flexible. Because programmatic marketing means bids are arranged for each individual accessing the site people can be targeted to a far greater extent than before.

With a little planning, you can tweak your campaigns to extract the most data, brand loyalty, and sales. The new decade offers an exciting market for many businesses. With so many consumers actively shopping online, it’s the perfect opportunity for …..