Campaign of the week: The Lost Experience

By Expert commentator 22 May, 2019
Essential

How do you go viral without social media?

Lost was created by Jeffrey Lieber, J.J. Abrams and Damon Lindelof, was produced by Bad Robot Productions, and was filmed almost entirely on location in Hawaii. The show was produced by ABC Studios and aired on the ABC network in the US. The show was also distributed across the globe with the UK showing it on Channel 4, which is where I got my hands on it. On top of it's brilliantly intricate (and often convoluted) storytelling, Lost was also known for its innovative nontraditional marketing. This came as a world-spanning alternate reality game (ARG) in 2006 called The Lost Experience.

The advertisement listed a telephone number which brought up fictional voicemail lines for employees at the Hanso Foundation. Some of these messages provided clues to be used in the Hanso Foundation's website. Commercials for the Hanso Foundation in subsequent weeks directed players to other in-game websites, some of which are tied to specific sponsors. I have mapped out the entire game below.

The first stage of the game centered around the “official” Hanso Foundation website and involved players in discovering clues hidden within the site left by a hacker known only at the time as Persephone. These clues cast doubt on the Foundation’s claims of benevolence towards the human race, and introduced other characters in the game. This stage of the game was promoted by Hanso Foundation Commercials airing on ABC, Channel 7, and Channel 4, as well as co-sponsorship deals with Sprite, Jeep, Verizon and Monster.com. Additionally, a conspiracy-minded radio host DJ Dan joined Persephone’s fight against Hanso.

A tie-in novel, Bad Twin, was published in May 2006 under the fictitious author Gary Troup, who (in the show) was aboard Oceanic Flight 815 and whose manuscript was discovered by Hurley, read by Sawyer, and burned (at least partially) by Jack. Video interviews with Troup were scattered across the web, containing references to Troup’s out-of-print “nonfiction” book The Valenzetti Equation. The exact relationship of the novel’s story to that of Lost isn’t clear, but the timing of the book’s publication, as well as the ‘scavenger hunt’ sensibility of the interview clips, suggests that Troup and Bad Twin were another piece of The Lost Experience puzzle.

The second stage of the game began with the shutdown of thehansofoundation.org in response to Persephone’s hacking. A URL hidden in the sourcecode of the site forwarded players to the blog of Rachel Blake, a seemingly innocuous journal concerning her travels around Europe. However, when entering a secret code into the blog, another site was revealed: Rachel’s real site, http://stophanso.rachelblake.com. This site featured a video blog of her attempts to discover the truth about the Hanso Foundation’s operations, and expose their sinister deeds by tracking down the executives in Europe, especially mastermind Thomas Werner Mittelwerk. 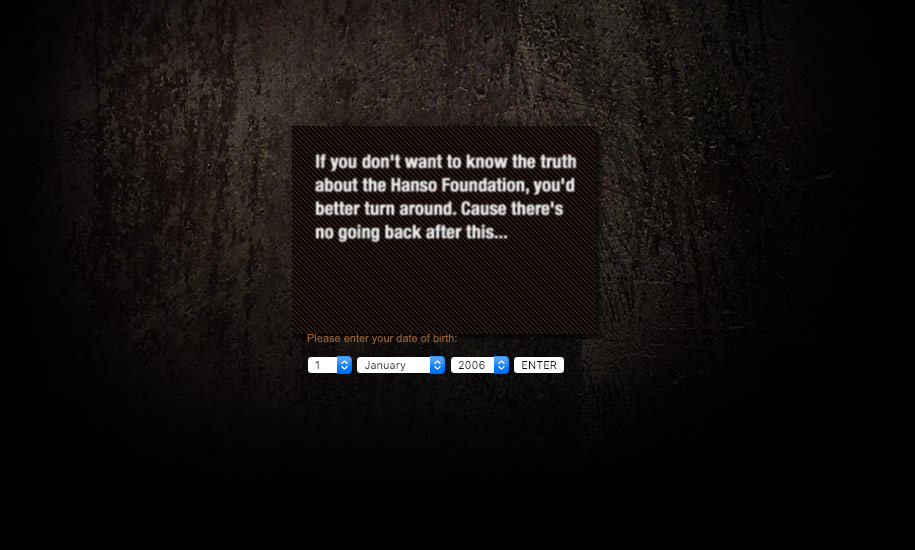 Through the course of the stage, players learned that Rachel Blake and Persephone were one and the same. Players also found that the Foundation, now under the sole management of “Dr.” Mittelwerk, was involved in suspicious activities in Iceland, using their Vik Institute to secretly run the Valenzetti Equation using a group of autistic savants.

Blake followed Mittelwerk to Italy, where he boarded the container transport Helgus Antonius, bound for Sri Lanka. Blake was assisted by Darla Taft, a Hanso associate who discovered some of their questionable dealings. She and her lover Hugh McIntyre were killed, presumably on Mittelwerk’s orders, but left Rachel instructions on how to follow Mittelwerk to Sri Lanka with the assistance of the mysterious Malik.

The third stage of the game was announced at the 2006 San Diego Comic-Con during the Lost Q&A panel where Rachel Blake stood up and accused the show’s creators of conspiring with the Hanso Foundation. Near the end of her irate speech she intstructed for all who “want the truth” to go to hansoexposed.com.

Stage 3 was based around piecing together of the video Blake filmed while in Sri Lanka that was to “tear the Hanso Foundation apart.” The video showed Mittelwerk talking to a small group of people, announcing his and the Foundation’s plans, presumably for the Spider Protocol. In the course of his speech, Mittelwerk showed an orientation video from 1975 narrated by Alvar Hanso, explaining the origins and purpose of the DHARMA Initiative, the Valenzetti Equation, the numbers and the island. Blake had gone into temporary hiding, placing glyphs online, in advertisements, and via podcasts to find each of the 70 parts of the video that, when arranged in the right order, showed the video in its entirety.

Stage 4 was the whereisalvar.com Apollo Bar hunt. This stage overlapped with Stage 3. The stage began roughly on August 23, 2006 and ended on September 18.

Stage 5 was the finale of The Lost Experience. It came in the form of a DJ Dan podcast and a final video from Rachel Blake on September 24, 2006. The video showed Alvar Hanso talking to Rachel. He revealed that he was her father, that Mittelwerk was keeping him prisoner and was behind all the atrocities. This press release confirms this. On the September 25th, thehansofoundation.org was updated with final messages from both Alvar Hanso and Thomas Mittelwerk. Some of the players behind the game also came forward and revealed their identities, although this probably isn’t an official part of Stage 5.

When ABC did this it before social media had taken off yet it gripped the show watches attention in the perfect way. The layering of media in separate channels including, TV, print and online, it was all unprecedented being done in this way.

The game last almost 6 months and managed to expand the show in to the real world with things that brought it to life. This thematically played wonders with the narrative and in turn, created buy-in to their target demographic. An audience looking for answers.

It went viral before "going viral" was even coined as an everyday term. The marketing team behind were way ahead of their time. In the social media age, this would've still been right up there as one of the best viral ad campaigns ever.