Facebook is making its Ad Metrics easier to understand

The social media giant is finally listening. Facebook has recently been switching things up to “better” suit its users - or has it really?

A while ago, Facebook announced changes to its algorithm, showing users less public content, like posts from businesses, brands etc., and more personal content shared by friends and family. And now, they’ve come up with yet another change, this time, specifically aimed for marketers.

To give businesses more of an insight into how the impact of their advertisements is calculated, Facebook has introduced new labels on some of its metrics. “We’ve heard that businesses want more insight into our measurement tools and metrics. So today, we’re introducing new labels on some of our metrics to clearly show how they are calculated”, the social channel stated in its latest blog post on Thursday.

Facebook has been on the receiving end of scrutiny and flak for a while now, for not making their business methods and algorithms transparent enough for the users. In particular, the advertisements that the platform publishes have often been under exceptional scrutiny, for failing to meet the generic advertising standards.

Recently, Facebook paid a hefty fine, after the city of Seattle in Washington accused them of not meeting their political ad transparency law. "Starting today, we will begin labelling some metrics in 'Ads Manager' as estimated or in development, to provide more clarity on how they are calculated and how you should consider using them" Facebook added, on their blog post, in an attempt to increase transparency around their advertising process.

According to a report from emarketer.com, Facebook earned $17.37 billion from digital ad revenue in the US, within the third quarter of 2017 and is expected to reach $21.57 billion in 2018 and $25.56 billion in 2019, showing an upward trend in their ad revenue generated from Facebook ads.

Given all that’s on stake with their massive digital ad revenues, it’s high time that Facebook improves the transparency of their ad metrics, to give marketers sufficient insight and education to fully benefit from investing in Facebook adverts.

Facebook has decided to label some metrics in Ads Manager as either ‘estimated’ and/or ‘in development.’ These labels can be found in a section within the Ads Manager reporting table ‘tooltips’, and in the customize column selector for ads running across Facebook, Instagram and Audience Network. 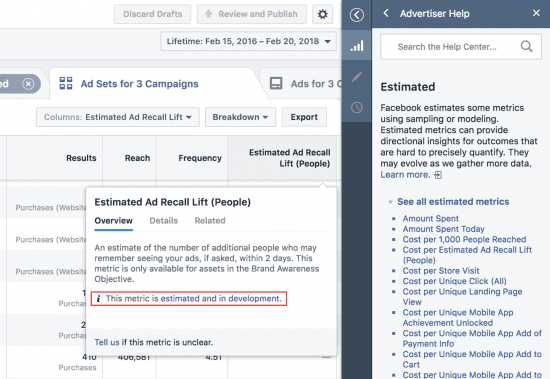 Facebook explains the estimated metrics as improved guidance in areas, where the results are often hard to quantify. For instance, real-time data such as ‘reach’ of an advert if based on an estimation of their sampling. They “analyze the number of people who see an ad multiple times, de-duplicate them and then calculate the total number of unique people in real time.” To do this in real-time, they sample the data and will therefore, label it as ‘estomated’.

Metrics marked as being In Development are the metrics that are either new or still being testing. Facebook has to constantly test the viability of these metrics before launching new ads, hence, the way these metrics are calculated is likely to change over time. So, facebook will now clearly label these as ‘in development’, to propagate transparent knowledge amongst advertisers and marketers making decisions based on these metrics.

Facebook is also removing some of their ad metrics to declutter and allow businesses to focus on more meaningful metrics, making it easier for advertisers to gain actionable insights on their ad performances. Starting July 2018, Facebook will remove around 20 ad metrics that are “redundant, outdated, not actionable or infrequently used.” They haven’t yet given a list of exactly which metrics they will be getting rid of, but more details are expected to be released, approaching July.

Facebook will also start a brand new programme called "Measure What Matters" in March, to educate marketers about the new changes in their metrics system. The programme will focus on two different tracks - one solely focused on advertisers responsible for brand objectives and one for advertisers involved with direct response objectives.