The Rise and Rise of Influencer Marketing

In a survey by eMarketer, 84% of marketers said they would launch at least one influencer campaign within the next twelve months.

It’s no secret that the world of marketing has been somewhat flipped on its head in the last few years. What with the vast inbound advancements in social media, growing dominance of online content and ever-increasing desire of brands to be seen as approachable personas, marketing professionals have had to change and adapt faster than ever before. However, there is one group that has ridden this wave of change better than any other, and has subsequently found itself at the very top of the inbound marketing pile: influencers.

Using influencers in your marketing strategy can often seem daunting and expensive, with no guarantee of success. What follows is an exploration of this prominent trend, what we can learn from it, and how best it can be implemented for 2017.

What is an influencer?

Firstly, it is apt to clarify exactly what is meant by the term ‘influencer’. Many subtly different definitions are available, but to all intents and purposes, ‘influencer’ usually refers to an online persona with a large, engaged and active following. This persona will most often have found success through social channels and/or blogging, but is essentially any individual who has the undivided attention of their audience, and can influence consumer behaviour. In his book The Tipping Point, Malcolm Gladwell discusses archetypes of people: mavens, connectors and salespeople. Influencers can one or all three. But they do all connect ideas and messages with a lot of people. This makes them attractive to brands to work with.

You may be thinking to yourself – ‘influencer marketing is nothing new’. And you’d be right to think so. The act of using highly regarded and influential individuals to endorse consumer goods and services has been around for centuries, most recognisably when popular celebrities feature in advertising campaigns. But something has changed recently that has sent shockwaves through the marketing world. This is, put simply, that the current influencers brands are able to work with are infinitely more humanised, approachable and accessible than ever before.

Engage influencers to expand your reach with our influencer marketing guide.This practical guide shows you how to use tools to find and interact with influencers on the best social media platforms for outreach, that’s Twitter, LinkedIn, and Facebook.

How have influencers come to be?

This is largely due to the unstoppable power of social media, but also to the growing popularity of blogging. It is now possible for literally anyone with half decent tech savvy and steely determination to gain online recognition, and for those at the top of their game, ‘recognition’ is a severe understatement. Most of the world’s top bloggers, vloggers and social stars are preaching to audiences that many magazines, TV channels and celebrities could only dream of. For example, Zoella (currently one of the world’s biggest YouTube stars) at the time of writing has had roughly 20 million views of her vlogger channel in the last 30 days. These new online superstars are essentially the content creators, researchers, publicisers and editors of their own magazines or TV channels. And the fact that they operate largely alone or as a single partnership is the root of their charm. In the oversaturated advertising market, consumers crave a more authentic voice, a more trustworthy voice, one they feel they know on a personal level and can interact with.

There are ‘Nay’ sayers

Unsurprisingly, the meteoric rise and current dominance of influencer marketing has been met with resistance from some. Concerns have been expressed about the industry having to completely morph to fit with the trajectory of a group of individuals who, just five years ago, were pretty much unknown. In one such article published in The Drum a few months ago, the writer asks “How can it be that someone without any formal marketing training or qualifications can now command six-figure sums for taking a few pics and posting them to Instagram?”

Although this is an important point to raise, it does somewhat overlook the main attraction of influencer marketing for brands – the audience. Influencers are so-called for a reason. They poured much time and effort into building an enthusiastic and active audience, not to mention one with key interests and passions. And the fact that this has been achieved without any prior marketing expertise only makes it more valuable. When working with an influencer whose audience aligns with their own key values, a brand can connect not only with potential customers it hadn’t previously reached, but potential customers that will be far more interested in and suited to its product/service than it could access alone.

The benefits of influencer marketing

And, unfortunately for the haters, influencer marketing stats from 2016 do pretty much speak for themselves. eMarketer’s previously referenced survey found that in the past year, over 80% of marketers who had undertaken campaigns collaborating with social media influencers found them effective for driving both engagement and awareness. And when you factor in that the average person spends about one hour and 40 minutes a day on social media, it’s hard to argue against working with online influencers.

So, it seems that influencer marketing is not going anywhere for now. But how is it best implemented for 2017? This is an especially important question, as influencers are becoming more and more savvy about their value, causing the process of working with them to become increasingly commercialised. The key to finding the right influencers for your brand is knowing the audience you want to reach inside-out. This means that although it is tempting to only work with the largest and most prominent influencers, if their audiences do not align with yours, they won’t be an awful lot of real use.

You need a budget – people

It is also important to understand that, especially in 2017, influencer marketing needs a real budget behind it. When surveyed recently, a group of beauty bloggers were asked what they require as payment for working with a brand. 82% said they would require monetary reward, and that free products were simply not sufficient. Gone are the days when a blogger was willing to review a product they were sent for free. Prominent beauty blogger Jane Cunningham added further insight to this: “Some brands come to me and say straight away that they know they need to pay to work with me, and they will get a lot of input in the post I write. Other brands will say something along the lines of ‘we’ve chosen you as a lucky blogger to work with us’, and those emails get instantly deleted.”

It will come as no surprise that lack of budget is cited as one of the most common reasons for brands not investing in influencer marketing. But when implemented and monitored properly, the results from this type of marketing can be invaluable. In a bid to keep costs to a minimum, the vast majority of companies conduct the influencer marketing process in-house. Although this undeniably avoids certain outgoings, and may allow a deeper insight into a brand’s target audience, it can ultimately be costly if mistakes or oversights are made. It can also be extremely time-consuming, particularly as most in-house teams claim to be searching for influencers manually. 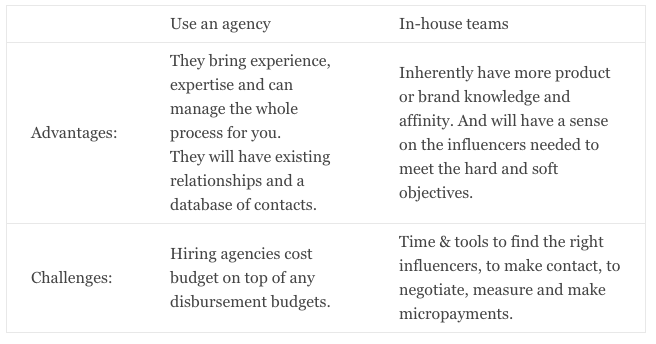 Whatever way you look at it; influencer marketing is a force to be reckoned with. And that certainly is not set to change in 2017. Whether you’re a seasoned pro, or just beginning to dip your toe in its waters, there’s never been a better time to discover the true power of influencer marketing done right.Another development is the growth of platforms and marketplaces to ease the burden on agencies and in-house marketers alike. They will have a ready-made audience of active influencers ready to take on a project with other features to streamline the process. This a levelling move really benefits smaller agencies and in-house marketers.

Thanks to Adrian Land for sharing their advice and opinions in this post. Adrian is CEO & Founder of SESOME and Considerable Influence – an influencer marketing marketplace. You can follow him on Twitter or connect on LinkedIn.