Bigger isn’t always better when searching for your influencers

Just look at Glossier, the skin care and makeup line that built its entire brand by engaging with everyday influencers on social media — no traditional marketing necessary. But let's dig deeper. While influencers can play a part in successful marketing campaigns, it is not only the influencers with the largest social followings who get the job done.

This practical guide shows you how to use tools to find and interact with influencers on the best social media platforms for outreach, that’s Twitter, LinkedIn, and Facebook. It also advises on Google+.

It’s common to think that more followers mean more opportunities for exposure, but research shows the opposite to be true, favoring micro-influencers with smaller followings instead. Think about it — the lower influencer-to-followers ratio allows the influencer to give more attention to individuals, ultimately fostering stronger, more personal relationships.

Case in point: The influencer-based social media marketing company HelloSociety found that micro-influencers have followers who are 60 percent more engaged than those of bigger influencers. 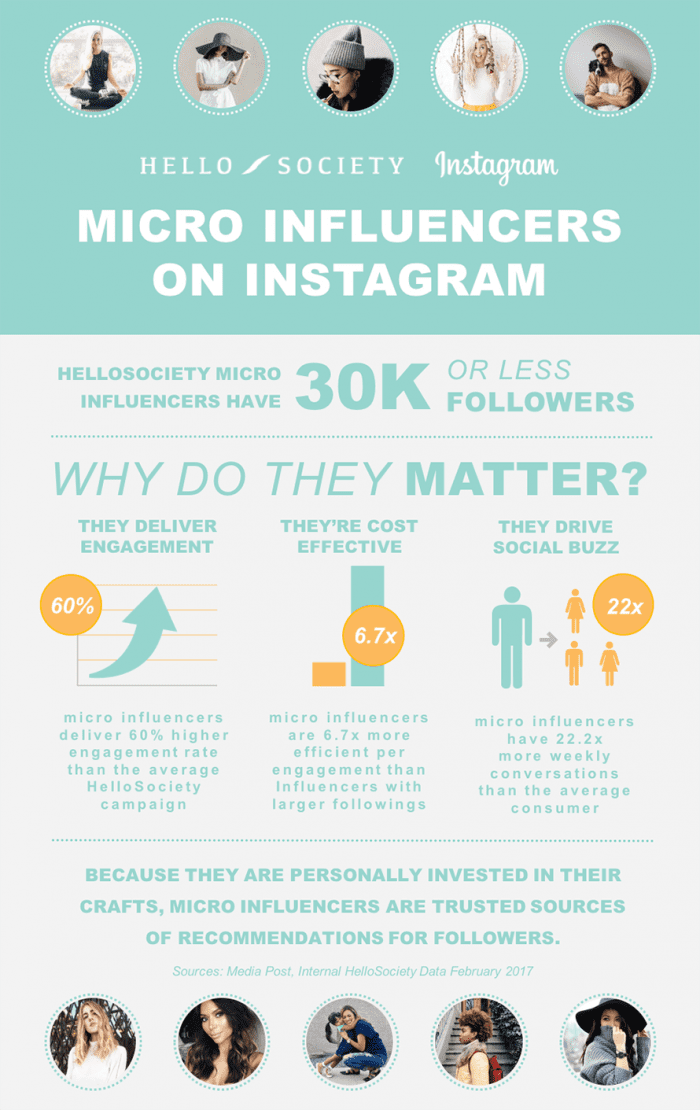 In addition, Markerly found that as the number of followers creeps up above 100,000, engagement rates sink below 2 percent. Meanwhile, a following in the 1,000 to 10,000 range averages about a 4 percent engagement rate.

There's a certain celebrity effect to consider here as well. After fame kicks in, influencers can suddenly feel less relatable to their followers. Not to mention, they become frequently unavailable and more expensive to work with. If you do not see enough return on that investment, why bother?

Perhaps that’s why LaCroix has relied on micro-influencers to build up its online affinity with Millennials. Similar to Glossier, LaCroix built its reputation by letting everyday consumers sing its praises. The company is known to target Instagram users with followers in the mere hundreds, and the fact that it has doubled its sales to $225.5 million without any traditional advertising speaks for itself.

Here are a few strategies to consider when engaging micro-influencers:

1. Don't get too serious too soon

You wouldn't ask someone to marry you on a first date, so don't go around asking influencers to sign a contract before getting to know them. If you are not cautious, you could ruin a good thing before it has a chance.

Instead, start by following target influencers on the platforms they're most active, then interact with them by liking and commenting on their posts. If things go well, explore ways to take it up a notch. Nurturing relationships with influencers from the start will make them stronger in the long run when the stakes are higher.

2. Look right under your nose

Starting a relationship with a micro-influencers doesn't have to be contractual or commission-based. Instead, look to brand advocates who are already talking about and tagging your brand. While your competitors burn time, energy, and money on winning over "big-time" influencers with less to show for it, you could be making a greater impact engaging with the little guys who are already investing in your product.

For example, in a Digiday article, one micro-influencer (who has about 2,500 followers) recalls how LaCroix sent her vouchers after she shared photos of herself with the cans of sparkling water. “I know that I am being genuinely rewarded for being an advocate,” she told Digiday.

Moves like this can earn you major points. You can also offer your micro-influencers perks like free products, sneak peeks at new launches, and invites to offline events where they can learn more about your brand while networking. They will see a lot more value in these offers than a major influencer with millions of followers.

3. Treat them as equals

If and when you do offer monetary compensation for a specific campaign, it's a mistake to view an influencer as an employee working for you. You're much better off treating influencers as partners. After all, they're also putting more money in your pocket and bringing more awareness to your brand. This makes them more likely to collaborate and more willing to deliver an authentic message.

To that note, any social push should feel like a natural fit for the influencer’s audience. Remember, influencers have a brand image to uphold as well, and the voice, tone, and style of their posts should stay consistent with the rest of their feed to make a campaign successful.

4. Keep a close eye on metrics

As with any type of campaign, you have to measure success with hard numbers. Track hashtags and social media mentions during and after the campaign. Just because you have stopped running ads or promoting posts doesn't mean the relationship with an influencer will stop bringing in results.

Compare how different influencers individually impacted the campaign to discover which tactics and audiences were the most effective and why. Also, don’t forget to ask yourself: Who do I want to form partnerships with in the future?

If you're still skeptical that micro-influencers don't stack up, take Tom's of Maine as a final example. It launched an influencer campaign featuring only micro-influencers and saw a 600% increase in consumer engagement. For every 1,000 micro-influencers in its campaign, it saw another 6,000 interactions on its own social media.

The proof is in the pudding. Now is the time to give micro-influencers a shot. Don’t let their smaller follower count fool you. Bigger is not always better.

This practical guide shows you how to use tools to find and interact with influencers on the best social media platforms for outreach, that’s Twitter, LinkedIn, and Facebook. It also advises on Google+.

Thanks to Ann Newland for sharing their advice and opinion in this post. Ann is Senior Vice President, digital strategy at Mitchell, an award-winning public relations firm that creates real conversations between people, businesses, and brands. You can connect with her on LinkedIn.