71% of consumers will unfollow influencers with fake followers

Influencer marketing
Chart of the Week

Chart of the Week: 71% of consumers in the UK and US will unfollow an influencer if it was revealed that they had bought followers, showing how easy it is to lose trust in the industry.

Influencers can help to make or break a brand. When you work well with influencers, they can raise brand awareness, get more people engaging with your company and increase conversion. However, if your campaign isn’t handled properly, it could result in a lack of trust and your audience going elsewhere.

This practical guide shows you how to use tools to find and interact with influencers on the best social media platforms for outreach, that’s Twitter, LinkedIn, Facebook and more.

One of the biggest reasons that consumers will unfollow influencers is if they deem them to be fake. Authenticity is more important than ever in an age where celebrities and influencers appear to promote anything, which is why marketers need to ensure they are working with influencers who are genuine and have real followings. Essentially, you need to check that your influencer really is influential.

Unsurprisingly, all of this means that influencers’ fake followers or inflated metrics are the main concern for marketers looking to use this form of promotion. This is why understanding how to judge influencers is important but also putting in place strict guidelines that need to be followed to ensure an influencer doesn’t have a negative effect on brand trust.

An issue with authenticity

Authenticity is the main aim of the game when it comes to influencer marketing and can be hard to achieve when you’re being hired by a brand for promotion. Many influencers attempt to make posts look authentic by not following certain legislation – after all, marking a post with #ad suggests that maybe a recommendation isn’t entirely honest. Unfortunately, not only does this break rules, but it can also have an adverse effect.

Some 67% of US and UK and 57% of German consumers will unfollow influencers who have not made it clear what posts are advertisements. Even more worrying is the fact that just 37% of UK, US and German consumers trust influencers to clearly show that a post is part of a paid partnership. This shows that it is hard for influencers to gain consumer trust but all too easy for them to lose it. 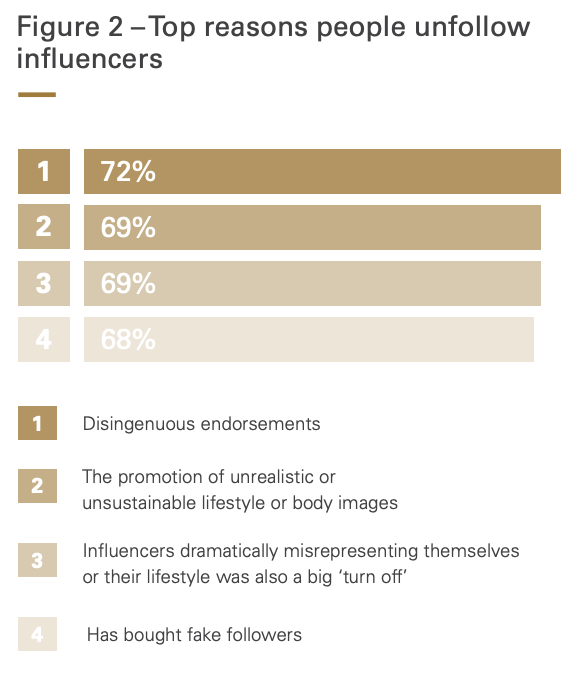 On top of this, 72% of consumers will unfollow influencers if they find their remarks or recommendations to be inauthentic, which is the biggest reason for influencers to be unfollowed. Consumers want influencers to work with brands and promote products that they actually believe in and would use.

However, these aren’t the only actions that can make influencers seem inauthentic. Consumers are in the UK (68%), US (78%) and Germany (61%) will all unfollow an influencer if they deem them to be promoting an unrealistic/unsustainable lifestyle or body image. Even more consumers (67% UK, 80% US and 61% Germany) would unfollow if it was revealed that an influencer had seriously misrepresented themselves of their lifestyle.

This level of authenticity often comes down to the brands targeting the wrong influencers for their campaign, however, influencers also need to be more selective when it comes to choosing partnerships. Influencer partnerships and campaigns need to be based on shared values in order to create a believable and real experience for followers.

The state of trust in influencers for marketers differs according to location. Within the US and UK combined, a huge 86% (almost nine out of ten) of marketers trust influencers. In comparison, just 10% do in Germany. This in itself could cause problems if German marketers want to supplement this trust by taking more control, as doing so could lead to inauthentic experiences.

Despite a mixed reception in terms of marketers’ trust, influencers tend to trust brands. Only 4% of influencers across all three countries said they don’t trust brands to work fairly with influencers. However, fairness is not the most important aspect for influencers when working with brands. 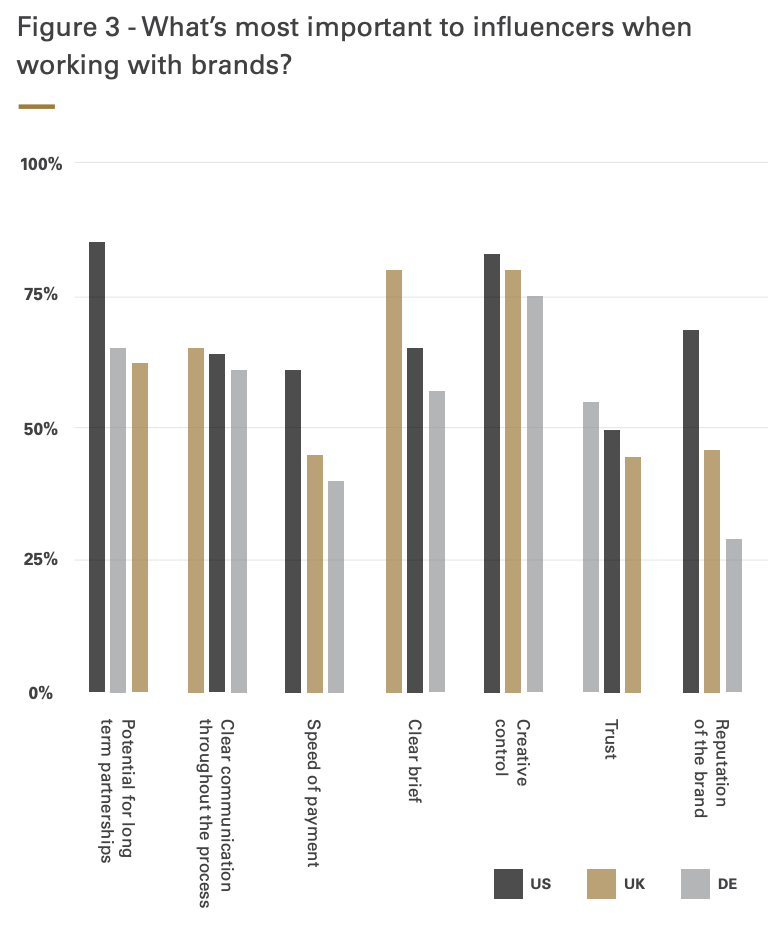 For influencers in the US, the most important factor when working with brands is the potential for long term partnerships. Within the UK, it’s almost even between receiving a clear brief and having creative control, with this control also being important for influences in Germany.

It is this level of creative control that is important for authenticity, but it could also cause issues in terms of marketers trusting influencers. After all, brands want to ensure that influencers are saying the right things about them.

Marketers also want to maintain some of the creative control, especially when it comes to the visual elements of a post – such as a photo used on Instagram. One in five marketers (22%) want to have some say over the style of the mage while 9% want full control.

Marketers are more relaxed when it comes to the caption used by influencers with just 10% wanting full control and another 10% saying they want some input. However, marketers need to remember that it is not just the caption that needs to feel authentic, the imagery does too. If a photo stands out as not being an influencer’s usual style, this could see engagement drop.

Over half (55%) of German marketers, 43% of US marketers and 36% of those in the UK feel they should have total control over both the visual and written elements. When you consider the fact that 86% of marketers in the US and UK trust influencers, this stifling of the creative process they follow seems common.

Of course, it isn’t just the influencers and marketers who need to trust each other, consumers need to believe in influencers too. Although influencer marketing has experienced some challenges recently, consumer trust is still high among certain demographics and many people are allowing influencers to influence their buying habits.

A huge 91% of those aged between 16 and 24 in the UK and US said that adverts on social media had influenced their purchases, showing that social media is a powerful channel. On top of this impressive stat is the fact that 60% of this demographic said that influencers had driven some of their purchases in the last six months.

Building trust can help recommendations for purchases to have more meaning, especially as 18% of UK, 25.4% of German and 32% of US consumers have all said that a recommendation from someone they trusted was a factor in a purchase. This recommendation could come from friends and family members, as well as online forums or influencers, although 19% across all countries trust influencers over friends.

In fact, 35% of consumers in each of the three countries said that they have been strongly influenced to make a purchase based on social media content shared by an influencer. On top of this, influencers are often trusted more than celebrities, even those who promote brands that are relevant to them, with consumers in the UK (23%), US (29%) and Germany (35%) agreeing.

This goes to show why maintaining consumer rust in influencers pays off for brands too.

There is obviously plenty of money to be made in the influencer marketing arena, especially as the industry has grown by 300% since 2016 and is expected to be worth $6.5 billion this year. However, there are also plenty of challenges to address, not least the fact that consumers can be incredibly fickle.

It is much harder to build trust in an influencer than it is to destroy that trust, which brands need to take into account when working with them. Failing to find the right influencer for a campaign could see them experience issues, but it could also result in declining trust for your brand.

You also need to ensure that influencers have trust in your brand, so they want to work with you. Long-term partnerships can be good news for all parties and can help companies build a relationship with an influencer’s audience. This means being open about what the arrangement is and what you expect, including the level of creative freedom the brand wants.

Making the most of influencers can be a great marketing move, but it isn’t as easy as simply choosing a well-known name to post on social media. Develop an influencer marketing strategy, research those you want to work with and make sure that your brand aligns with their values.