Is the age of the influencer over?

Recent news stories have shown influencers in a bad light, which could impact their effectiveness when it comes to brand partnerships

You can’t scroll through Instagram nowadays without seeing a perfectly posed photo posted by an “influencer” either selling something or themselves. This hugely popular form of marketing has really taken off, creating a new breed of celebrity and opening up now opportunities for marketers.

However, you have to question whether influencers take things a little bit too far and whether they are actually influential in the first place. It’s all well and good working with a brand that you believe in and want to recommend to followers, but the influencer world now seems to be more about freebies than authentic recommendations.

Avoid the pitfalls that limit engagement with your target audience. As with any marketing or e-commerce activity, you could be missing out if you fail to think-through your social media activities.

As someone who has been described as a “micro-influencer” for my modest Instagram following and blog (which were both only created because I wanted to rather than with the aim of being an influencer), I can’t help but wonder if the market is over-saturated.

I’m more likely to scroll past one of the highly filtered photos from influencers I follow in order to get to more pictures of my friends’ cats. On top of this, there are far too many people proclaiming themselves to be influencers and giving the rest of the industry a bad name through unfair demands.

While the influencer arena used to be a bit more straightforward, the rules now seem to be a bit murkier, so is the juice really worth the squeeze when it comes to influencer marketing or is it time to go in a different direction?

If you search for influencer marketing online, you’ll likely see a few recent news stories about influencers that have taken things a bit too far. While most people have reacted jokily to most of them, as a marketer, I have to consider if these individuals are aware of the damage they can be causing – especially to any brands who they have partnered with.

One example that comes to mind is the story that saw an apparent influencer request free services from a wedding photographer. A small photography company received an email from an influencer’s publicist requesting two wedding videos and thousands of photos, estimated to be worth £3,000 to £4,000. All for free. 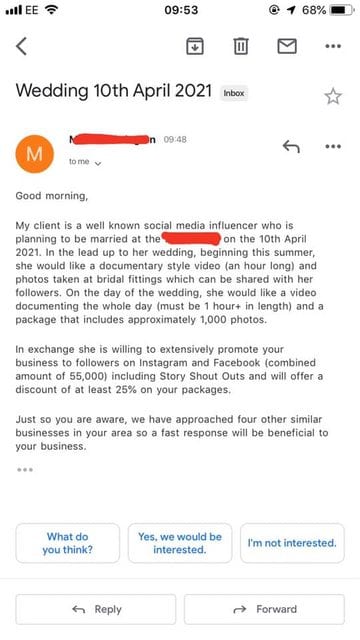 So, what would the business get in return? Well, apparently the “influencer” would promote the business on Facebook and Instagram, which have a combined follower count of 55,000, and offer a discount of at least 25% on the photographer’s packages.

At no point in the email was the influencer’s name mentioned and there were no links provided to social accounts or a blog so the photographer could check these claims and see if it was worth their while. 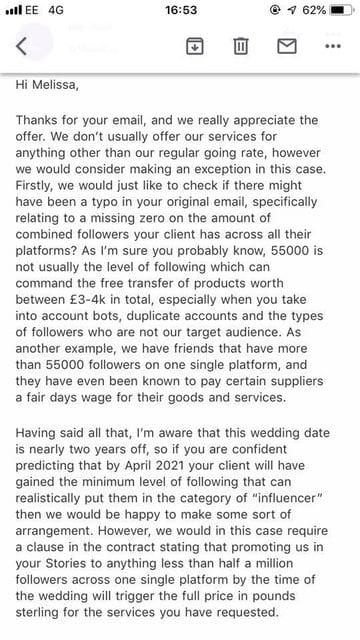 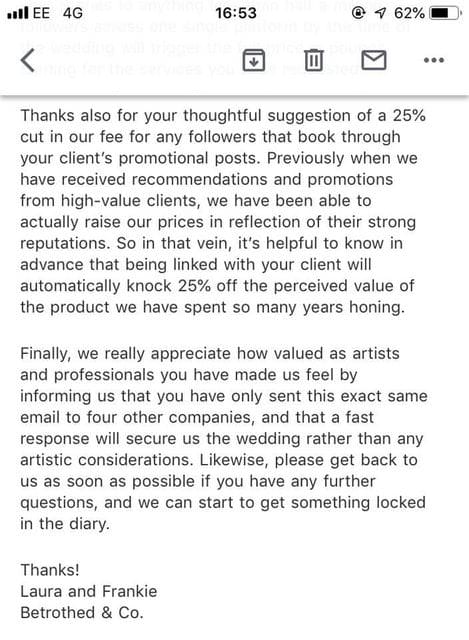 As you might expect, the offer was turned down due to the fact that the following level was not large enough to command free services worth so much money. The fact that the promotion would also result in a drop in fees was also highlighted as being an issue. 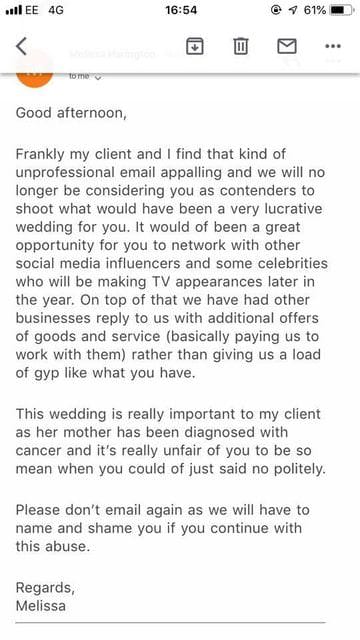 While the initial email was bad enough, the follow-up from the influencer’s apparent publicist showed the very ugly side of the industry. It’s understandable that no one likes to be rejected, but what this influencer seemed to fail to grasp is that their request was essentially a business proposal, meaning a professional pitch and response were required. Instead, their emails were shared across social media and news sites and deemed to be “a spectacular fail”, as well as incredibly entitled.

This isn’t the only example of influencers being shut down when they’ve requested something free, although it is one of the most entitled examples I’ve seen in a while. It seems as though people view having a large following as being a reason they can simply hold their hand out and request goods and services with “exposure” meant to be enough to cover them.

Some businesses simply turn them down while others choose who they want to work with and offer products to these individuals. However, one business recently got so fed up of being asked for freebies from influencers that it took a different approach.

The owner of an ice cream van has reportedly been turning down bloggers and Instagrammers on a weekly basis since he opened in 2014, as all of them want to promote his business but only if he can provide them with free ice cream.

Apparently, his exasperation reached fever pitch recently, which led the business to institute the “influencers pay double” rule. This followed on from being asked to cater for a party for 300 people for free in exchange for exposure.

As a result, ice cream is $8 for influencers and $4 for everyone else with the business owner saying that he will never provide free ice cream in an exchange for a post on social media. The move has been widely praised, suggesting that people may be over the age of influencer.

The responses to just these two recent events, let alone the rest you can easily find, suggest that there is now a lot of anti-influencer sentiment. Not only are businesses and people across social media getting fed up of the entitlement of the influencer, it seems that the manufactured aspect of their posts is also less effective today.

Perfect photos of holidays, food, makeup, fashion and anything else they are selling are no longer hitting the mark. In fact, there’s even an Instagram account dedicated to highlighting exactly how photos are all starting to look the same as those on the platform seek to increase their followers by emulating other people’s posts. 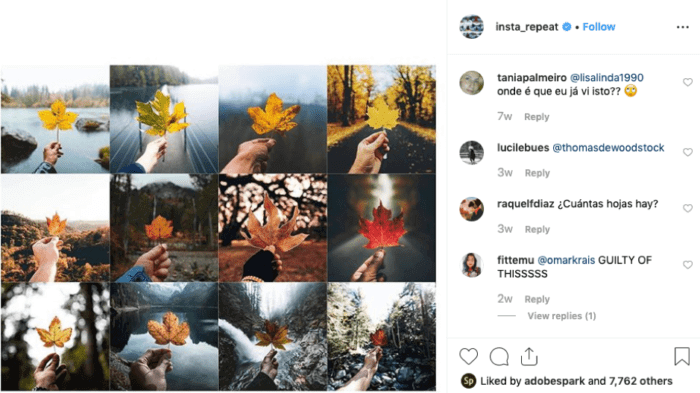 These strategically crafted updates are often paired with a status that sounds more like a press release, reducing the authenticity of the post. For brands, this can make what should be an honest recommendation – even if the post is sponsored (after all, why would you want to promote something you don’t like) – look like another ad, which isn’t about to influence anyone.

It seems that people are completely over the perfect poses, the far-too-pretty avocado toast and the life moments that look as though they’re part of a magazine shoot. What the influencer world seems to need now is authentic, real and maybe even slightly messy posts that show followers that they are real people.

With people now putting more store in online reviews and friend and family endorsements, creating posts that feel authentic is more likely to see results and allow influencers to cultivate relationships with followers. This is perhaps why micro-influencers often have better engagement when it comes to product recommendations, as they often have better relationships with their followers than those influencers who have hundreds of thousands of followers.

What can brands do?

Brands are still seeing ROI from their influencer marketing campaigns, but with anti-influencer sentiment seemingly on the rise, exactly how long is this likely to last? If more negative influencer stories hit the headlines, are people going to start trusting influencers less?

This practical guide shows you how to use tools to find and interact with influencers on the best social media platforms for outreach, that’s Twitter, LinkedIn, Facebook and more.

Unfortunately, I don’t have a crystal ball that tells us the answers, but it is probably a good idea that brands start to explore other options rather than putting all their eggs in a perfectly styled and filtered influencer basket.

Is UGC the answer?

With authenticity being the aim of the game and people trusting online reviews, adopting a user-generated content (UGC) strategy could be a good alternative to influencer campaigns, or it could run alongside them.

UGC allows you to share real photos of your products taken by real people, as well as blogs, reviews and status updates. While it’s all well and good for you - or someone you’re sponsoring – to shout about how great your product or service is, it will mean more coming from someone who isn’t being rewarded for saying so and who isn’t affiliated with your brand. 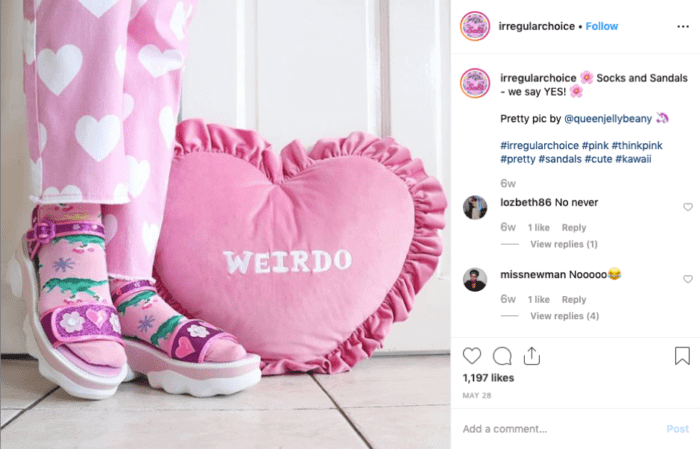 Although some people may share a recommendation after purchasing your product once, there’s a lot to be said for encouraging customer retention. Retaining customers is cheaper than acquiring them but more than this, encouraging your customers to come back repeatedly helps to transform them into brand advocates. This means that you’ll benefit from more content created by them if they are active on social media, as well as reviews that are likely to be more in-depth and overwhelmingly positive.

Some options to encourage customer retention are:

Giving people reasons to come back but also to talk about you could help to deliver the authenticity that influencer marketing currently seems to be largely lacking.

Now I’m not saying you should sack off your influencer campaigns completely, but to get the most out of them, you need to consider how to use this type of marketing.

Rather than dealing with influencers who come to you – unless they really are well-known – find the influencers you want to partner with. This will allow you to see if an influencer is actually influential and, therefore, worth working with.

Take a look at how much engagement they are getting. They may have thousands of followers, but if they are only getting a handful of reactions and comments per post, their audience either isn’t engaged or many of their followers are not real people.

You should also see how authentic their posts are. Are they just about selling or are the products they are recommending actually useful to them and their audience? Understanding this will also give you a good indication if your brand is the right fit for them.

With the rise of social media, it is now easier than ever to gain a lot of followers and become a self-proclaimed “influencer”, but if someone isn’t influencing or engaging their audience, they aren’t truly an influencer.

Recent negative news stories surrounding influencers means that brands need to be incredibly careful about who they partner with and how they manage their influencer campaigns. This valuable form of marketing can still provide good ROI and allow you to reach new audiences, but only if you choose the right person with the right messaging.

In terms of influencers, or those who wish to become influencers, it may be a good idea to turn down the entitlement and cough up the cash for any products or services you’d like to recommend rather than asking for freebies in return for “exposure”.