E-commerce conversion rates – how do yours compare?

As you will know, conversion rates are often used as a KPI to review the effectiveness of e-commerce sites. Naturally, all site managers and owners want to know, "how do our conversion rates compare?"

Read more of the latest stats that you can use to benchmark your company's performance and inform your future strategies with our premium compilation of online marketing statistics.

Before we get to the stats, a couple of caveats on benchmarking conversion rates:

When benchmarking conversion rate, we think it's important to explain to marketing managers that they should go beyond headline conversion rates to segment conversion by different types of visitor.

To see why, take a look at Dan Barker's excellent post explaining why conversion rate is a horrible measure to focus on...

How is e-commerce conversion rate measured?

When benchmarking conversion, it's important to consider the denominator. Are you dividing the number of sales by number of unique visitors or visitor sessions?

In Google Analytics, which can be considered the standard reference, sales transactions are divided by visits. E-commerce Conversion Rate is defined by Google as:

We keep this compilation updated as new conversion data is published. This is the first 2020 update which still includes 2019 data since there is a lag in the publication by the Martech vendors who share their customers' data. We will update more in 2020 once new data from the year is published.

Become an Individual Member to access the latest channel-specific guides

What is Individual Membership? 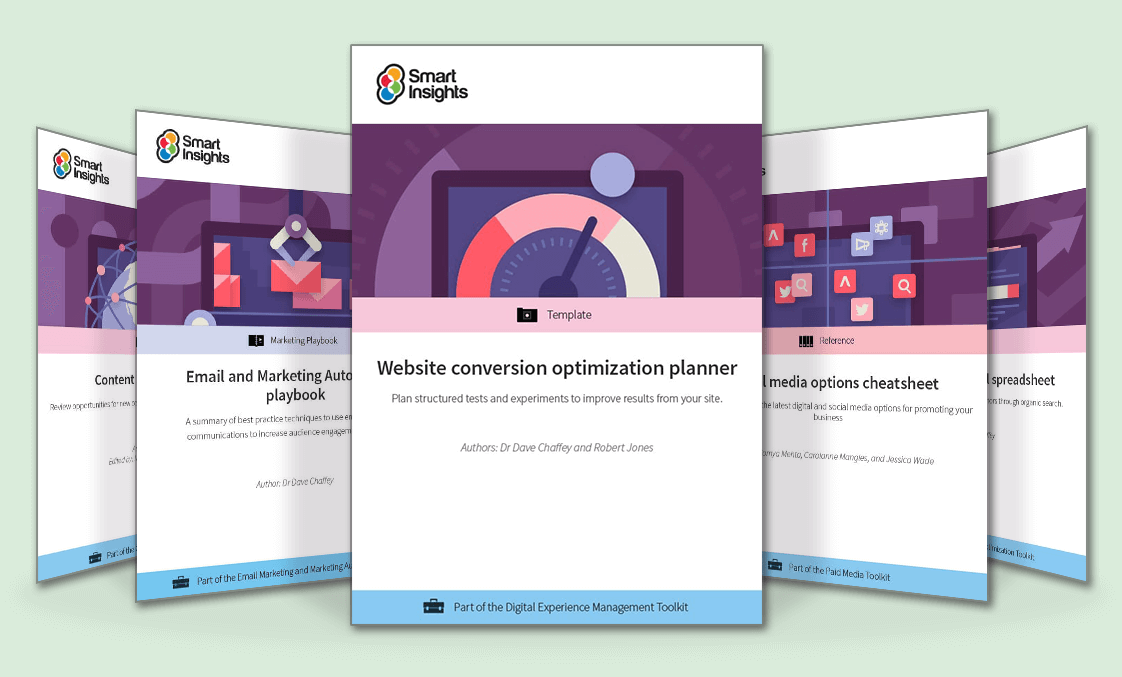 This recent update is from the Adobe Digital Index 2020 report into consumer electronics that compares conversion to these other sectors. The wide variation in conversion by sector is clear here, showing the importance of comparing to similar sectors where possible. 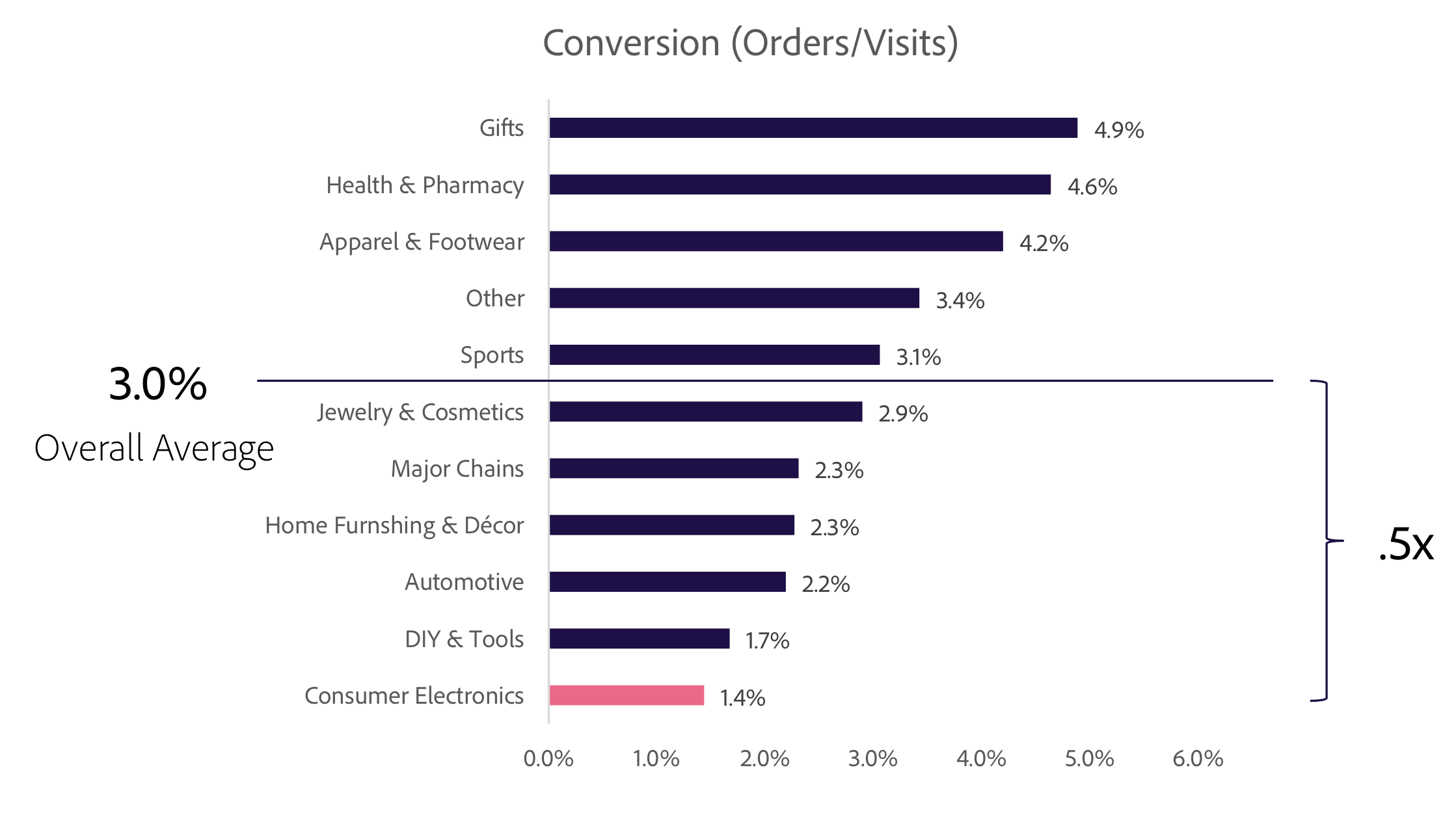 This research from Episerver retail clients (based on 1.3 billion unique shopping sessions across 159 unique retail and consumer brand websites) shows a typical pattern. Conversion rates are significantly higher where consumers have higher intent, i.e. they are searching for products. This compares to social and display referred visits where conversion rates are significantly lower. 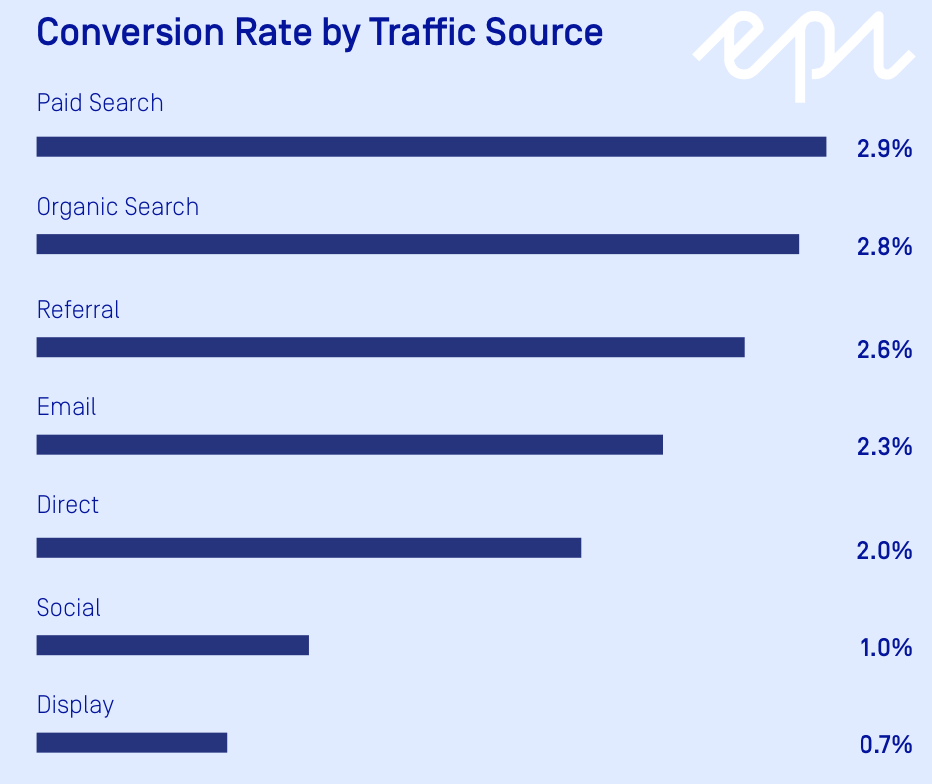 The Monetate e-commerce Quarterly is a great source giving regularly updated with United States and United Kingdom benchmarks on conversion segmented by devices and media for large e-commerce brands.

With shoppers increasingly using smartphone and tablet to purchase, it's vital for online retailers to know conversion benchmarks they should be achieving on a smartphone device.  You can see that typically m-commerce conversion rates are around half of those on desktop. Improvements in mobile experiences over the past years haven't impacted this figure, showing that smartphone is more popular as a device for browsing products while desktop is preferred more for transacting. The latest data was published by Monetate for Q2 2019. The full report also includes average add-to-basket rates. 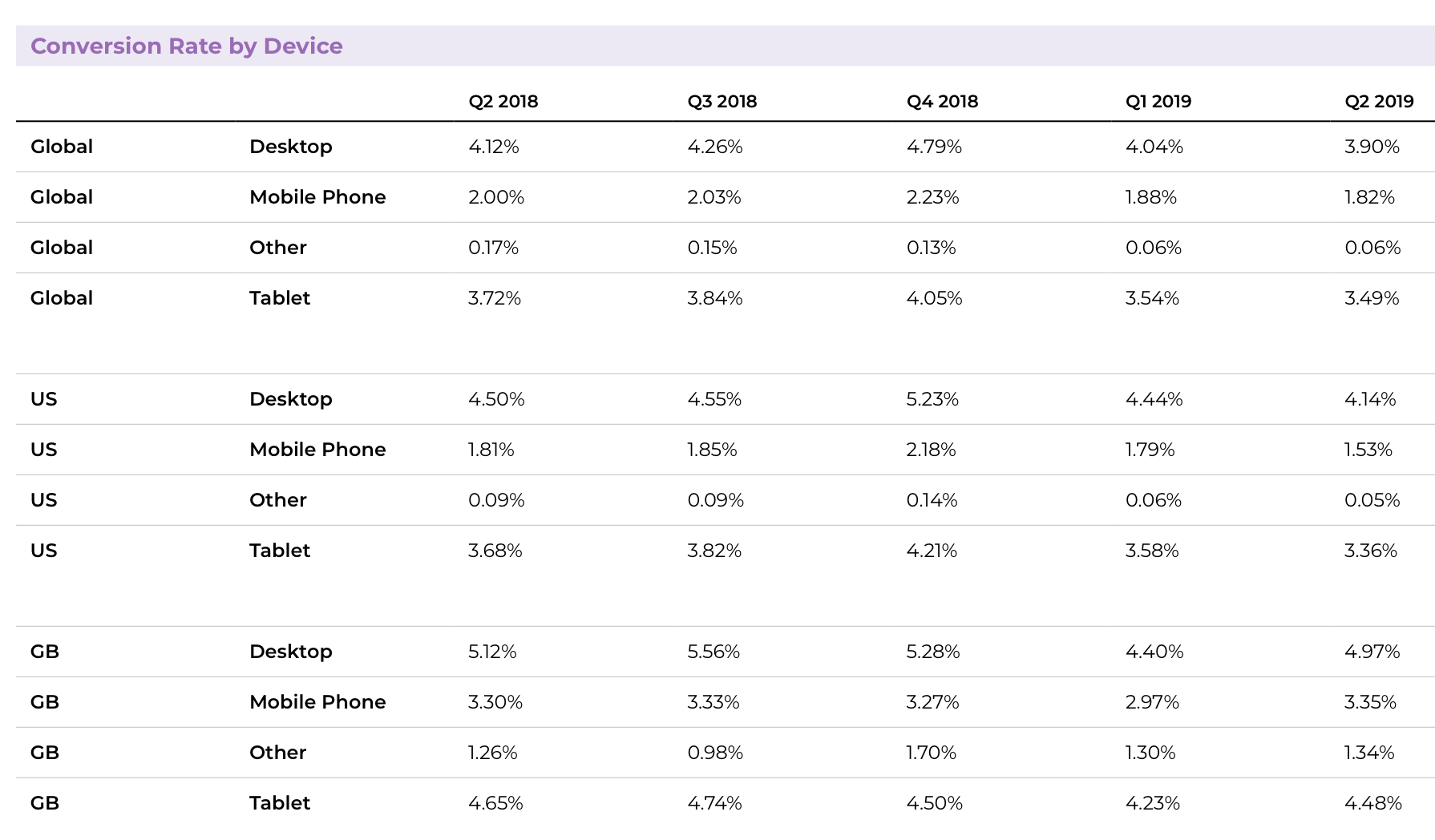 Further insight is available on conversion rates by operating system:

Wolfgang Digital has a useful new E-commerce 2019 KPI report based on data from their European and US-based international clients. It's based on an analysis of over 250 million website sessions and over €500 million in online revenue over the 12 months from July 2017 to June 2018.

Variation in conversion rate by country is shown, with UK conversion rates highest. This will depend on several factors. Online conversion rates tend to be highest in more mature markets where people are less likely to buy in-store, but it will also depend on brand-trust, so if a company is less well-known compared to the country in which it is based, this could reduce conversion.

Compilations of published conversion rates like this one often only consider online conversion to sale, yet offline conversion points such as 'click and collect' have become more important as this data from UK multichannel retailer Argos shows. You can see that digital accounts for 59% of all sales, but less than half of this amount would be counted as an online sale (Internet Home delivery and Fast track delivery, i.e. within one day). 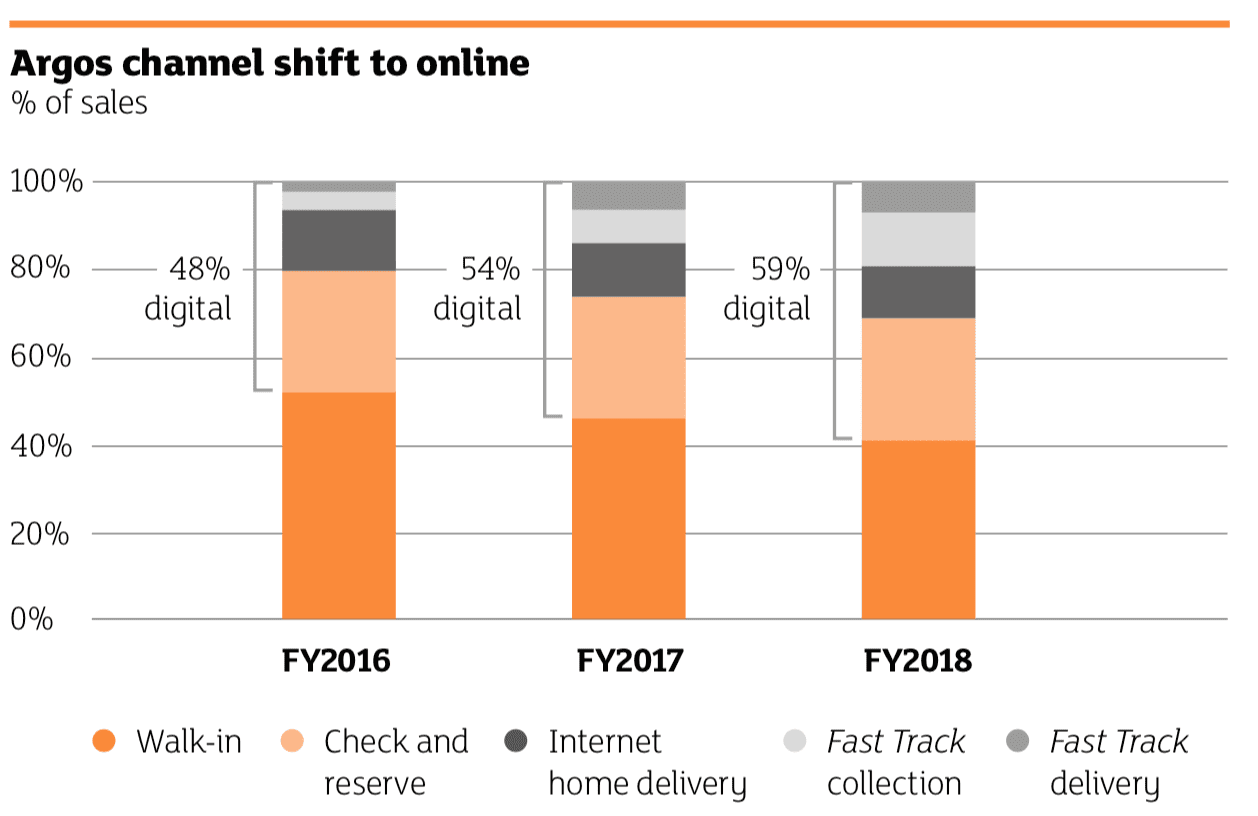 What are the reasons consumers are less likely to buy on smartphones?

The comScore Mobile Hierarchy report has some useful insight into this, which retailers can use to improve their service or messaging to reassure consumers. 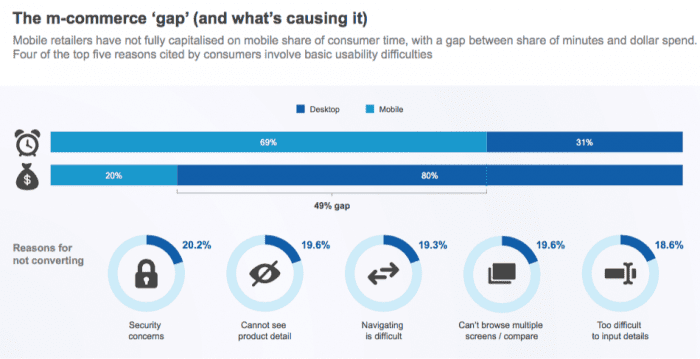 The average conversion rate in Google Ads on mobile across all industries is 3.48% on the search network and 0.72% on the display network.

Here are the results from 18 industries which could be useful if you are a startup modelling conversion rates as part of a business plan, or if you want a top-level comparison for your activities with others in your industry.

As would be expected, the number of sessions with product page views is much higher than the other micro-conversions, approaching 50 percent. This provides a useful benchmark and prompts retailers that it's useful to assess conversion to product page views when making site design improvements.

It also reminds us of the value of following up on interest in specific products and categories via sending personalized browse abandon emails which is the focus of the source of this post discussing best practices for browse abandons.

It's rare to see conversion comparisons by traffic source. This data is from an analysis of over $1 billion in sales on the Shopify platform over Black Friday / Cyber Monday when 64% of sales were on smartphones, a 10% increase from the previous year. 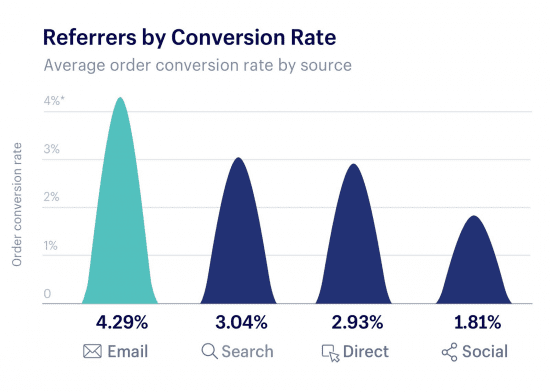 You can see that email is the highest converting channel. We would expect this since email subscriber lists contain customers (and some prospects) that have a higher conversion. Bear in mind that conversion rates for sales events can be significantly higher than during normal trading. Search visits are significantly higher converting than social since search has higher intent if someone is looking for a specific product or brand. Social media conversion has lower intent. Also since > 80% of social media browsing is on smartphones this will also decrease conversion since we have seen smartphone conversion is lower than desktop.

This report from the Adobe Digital Index retail report has a simple table comparing cart and visit (overall) conversion on smartphone vs tablet vs desktop. It shows that visit conversion is nearly 3 times higher on desktop vs smartphone.

Here are the tablulated figures: 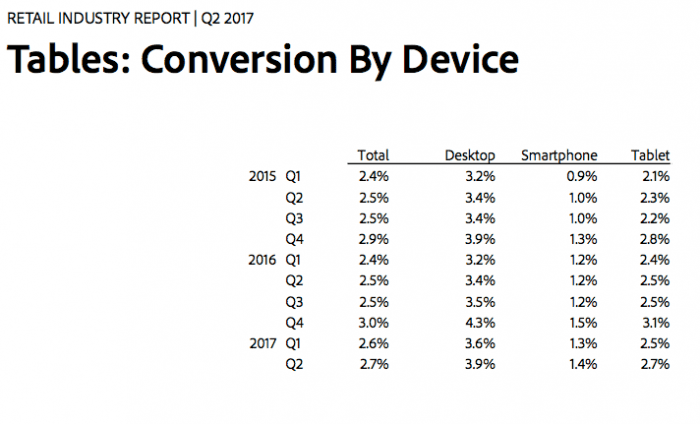 If you're creating a business case for mobile-optimized sites as explained in our E-commerce mobile and desktop wireframes guide, this data is also valuable since it shows the variation in conversion rate by mobile devices type.  Tablet conversion rates are similar but slightly lower than desktop conversion rates, suggesting people are increasingly comfortable with the experience of buying on tablets.

However, it's a different story for Smartphones since these convert at one-third to one-quarter of the rate of traditional or tablet devices.

This suggests smartphones are more of browse or research platform rather than a buy platform since many of the large retailers featured in this survey will have mobile-optimized sites. Smartphone experiences should be personalized to show this different form of usage. The lower conversion rates for mobile devices are also shown in these compilations of Android vs MacOS vs iOS operating systems, which gives the latest 4th quarter data released in early 2017.

Conversion rates for other sectors: telecoms and travel 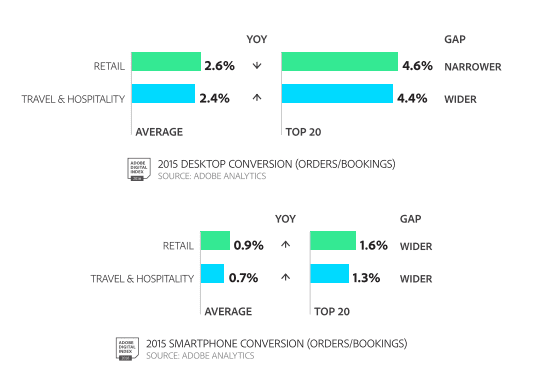 The ADI report also compares conversion for EMEA countries against the US. UK and US conversion are significantly lower than other European countries perhaps because of less competition or Amazon being lower in these countries. Different rates of smartphone adoption will also affect this cross-platform average. 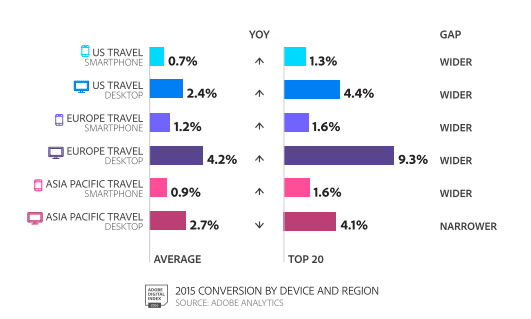 As Dan Barker suggests in his advice we mentioned at the start of this post, conversion rate gets more useful as you break it down by different types of visitors with different intent and a different relationship with the retailer. Different conversion rates and average order values can then be segmented for different audiences to understand and work to improve the quality of traffic or strength of propositions, for example:

I'm also often asked about conversion rates in other sectors, particularly for business-to-business lead generation. While similar caveats about sub-category, type of visitor and strength of brand apply, this is a useful compilation from this older Marketing Sherpa of average conversion rates by industry sector. 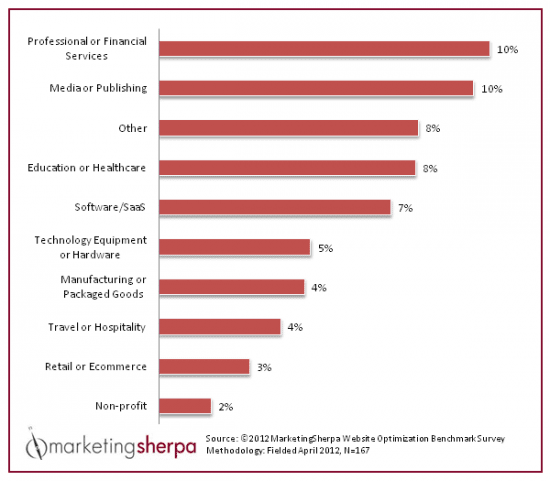 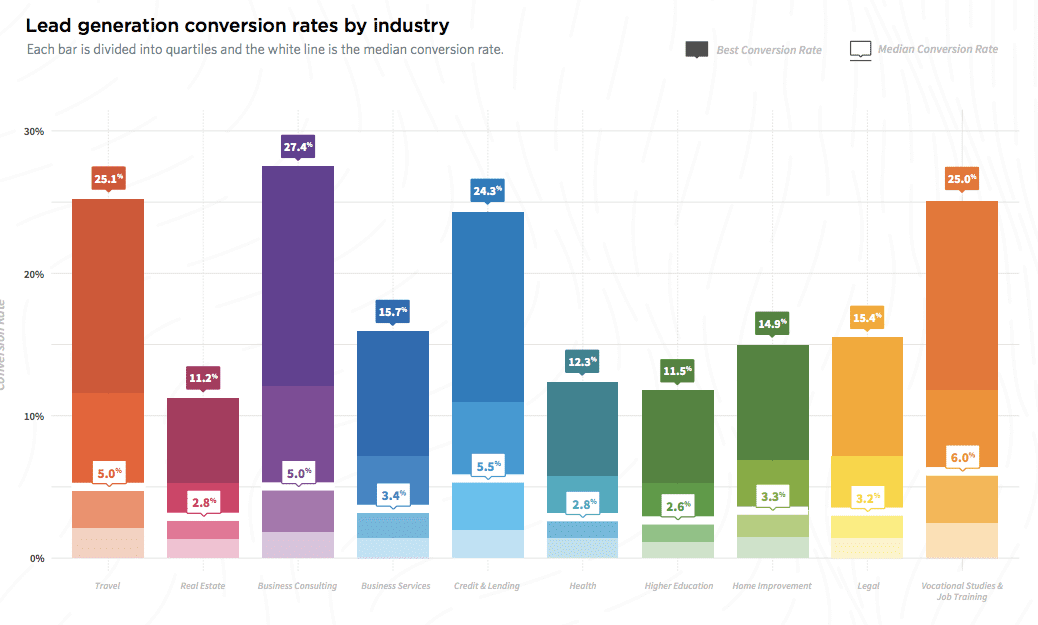 The chart shows wide variation within and between sectors with some businesses achieving lead generation conversion rates much higher than the media. So, to compare against your rates it's best to look at the media rates which vary between 2.8% and 6%.

Another source to use for benchmarking lead generation efficiency which has unique insight breaking down the process by sector is provided by the Zuko form performance benchmarks. You're able to either explore conversion for different form types in a different report accessible from the Benchmarking home page, or you can narrow the types of form you are looking at via a drop-down on each report. Form types include purchase, enquiry and registration and most we track are transactional forms of various kinds, but you can see the breakdown in those reports too 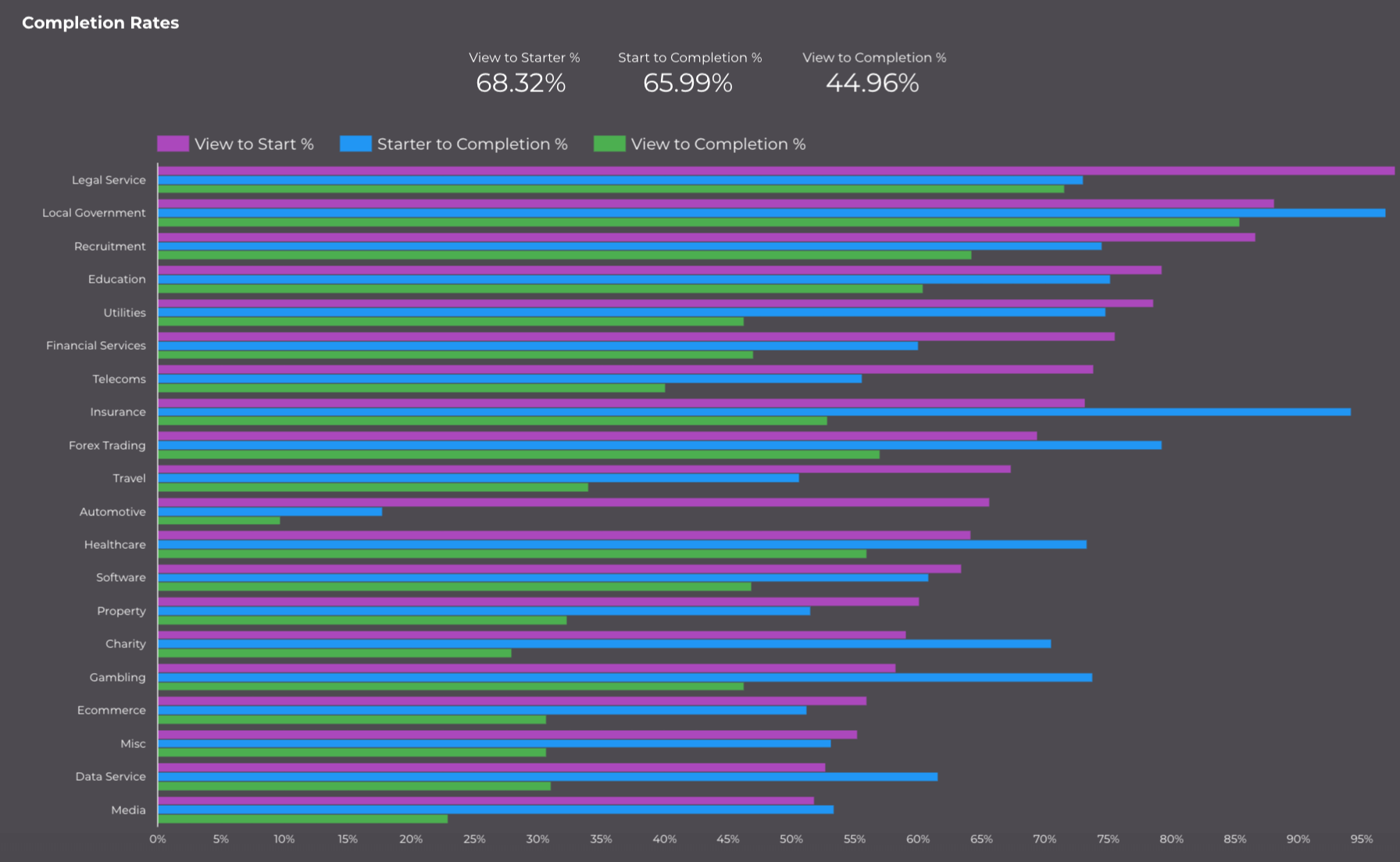 The measures for each part are:

This shows that typically only one-third of people start entering data into the form, showing the value in AB testing to ensure you make the value of completing the form via the title, copy, imagery and follow-up clear. Overall, just under half typically complete each form.

A comparison is also available for mobile vs desktop. This shows mobile conversion rates are slightly lower than desktop, but not to the same extent as for e-commerce sites. 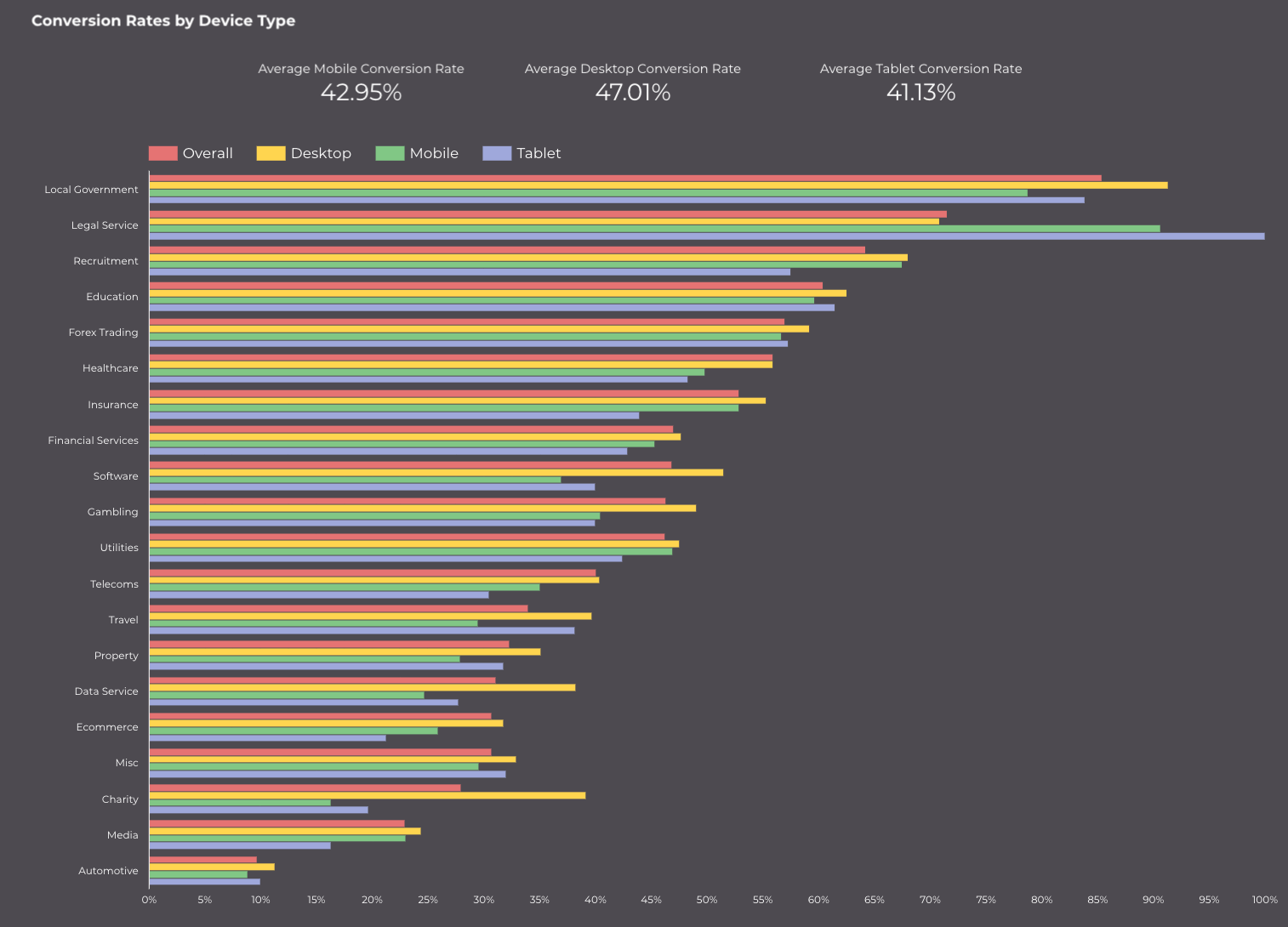 How to win, influence and retain more customers to build brand loyalty

More choice means it not only becomes harder to persuade customers to engage with a particular proposition but also to retain their interest post-transaction. Digital has leveraged the greater array of choices available to consumers now, which is much more …..