Chart of the week: Only 2% of marketers have integrated all processes throughout their marketing funnel.

Creating a funnel that ticks all the boxes is a vital part of marketing. Your funnel should attract, nurture, qualify and convert, leading customers through to the checkout as seamlessly as possible in order to get the best conversion rates.

Unfortunately, few funnels are completely perfect. Most of us will find that our marketing funnel isn’t performing as well as we might like, with at least one section causing issues at any one time. While you can work to deal with these problem areas, it’s unlikely that all the issues will be solved.

More often than not, this friction between sections of the funnel is caused by how integrated all your process are. Poor integration will naturally slow other process and see your overall results impacted. 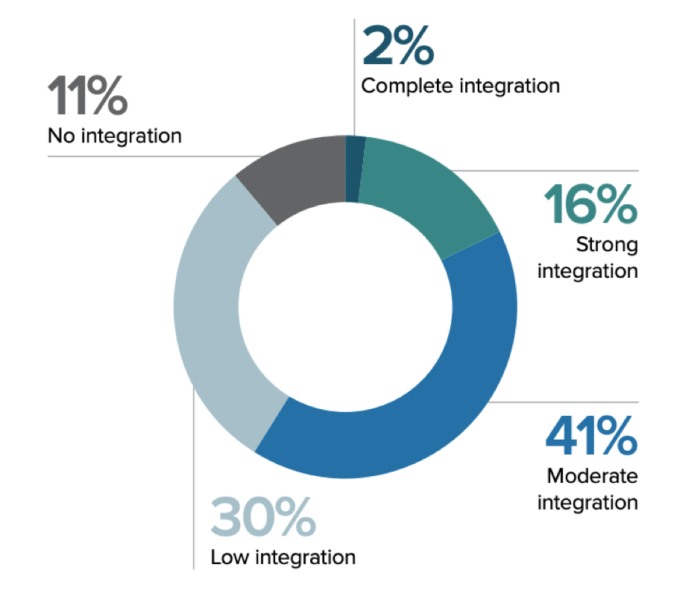 Currently, according to new research from Demand Metric and GetResponse, just 2% of marketers say there is total section integration within their funnel. Comparatively, 11% say there is no integration and 30% say there is low integration, suggesting that this is a big issue across the industry.

With the need to report and qualify success and show how marketing efforts are being rewarded, understanding the ROI of your marketing funnel is a must. After all, if you can’t attribute results to different processes included in the funnel, how can you define what does and doesn’t work? Failing this means that improving your funnel gets harder.

Currently, there is a failure to understand the ROI of marketing funnels, as seen by the fact that a third (33%) of respondents have a very imprecise understanding of their funnel’s ROI. A further 27% said their understanding is mostly imprecise while just 4% and 25% say it is very precise or mostly precise, respectively. 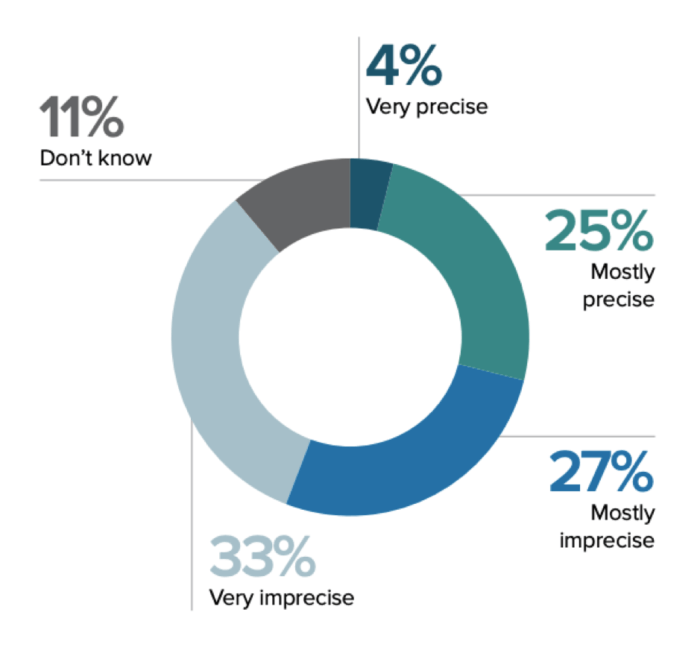 Improving your understanding of how your overall funnel and each process within it impacts on your targets and conversion rates can help ensure any changes you make are going to optimize your results. Otherwise, you risk adding yet more friction to your customer journey.

Marketing tactics throughout the funnel

There are many tactics used throughout the marketing funnel, but the frequency of their use alters as you move further down the funnel. It looks as though there is a lot more use of these tactics at the top of the funnel, which either means that communication is more streamlined the further down the funnel a customer moves, or that less is being done to nurture them toward conversion.

While email sees the most consistent use throughout all sections of the funnel, social media marketing, content marketing and paid media all see fairly large drop-offs when you compare usage at the top of the funnel to their use at the bottom.

Although video marketing isn’t used as heavily as other tactics at the top of the funnel, it also sees a large drop-off, despite the fact that it can arguably be one of the most persuasive forms of content in terms of triggering conversions. 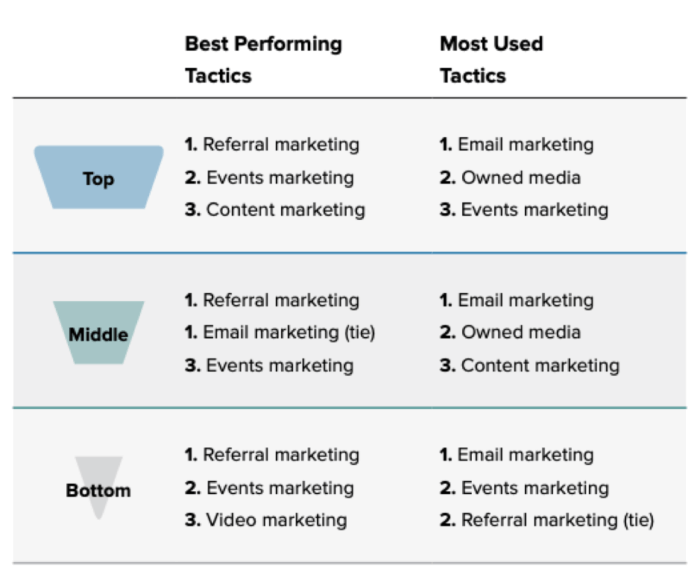 In terms of how easy it is to execute the various tactics, many marketers find it harder to do this as you move further down the funnel. While social media is marked as being ‘easy’ or ‘very easy’ to execute across all sections of the funnel, many other tactics show a different story.

Video marketing is seen as more difficult to use across the board, but particularly hard at the bottom of the marketing funnel, which is likely why it is not used heavily at this point.

What these findings reveal is the reason that the best performing tactics aren’t always the most used ones, as they are often difficult to implement. For example, referral marketing gets the best results across the top, middle and bottom of the funnel and yet social media is the easiest to execute across all of these. 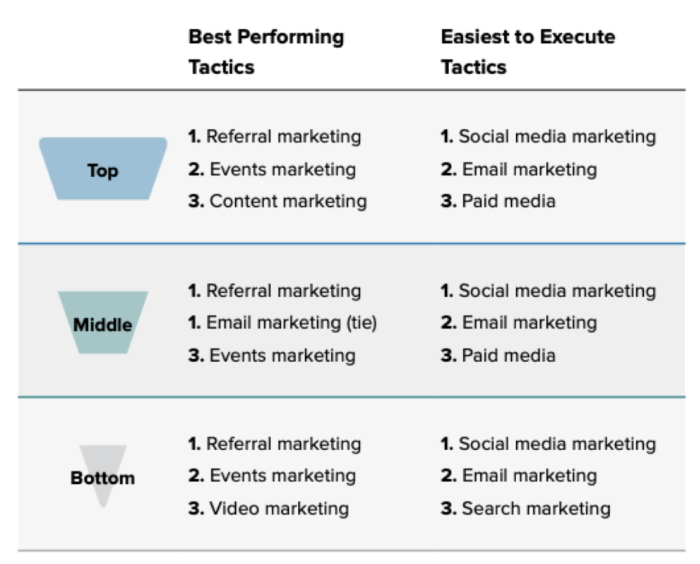 This raises the question as to whether it is worth tackling the more difficult tactics if they are going to perform better or if the difficulty faced executing them more would ultimately damage the ROI they offer. However, if the easiest-to-execute tactics aren’t delivering the results, is it worth putting so much effort into them?

One thing that could help to reduce friction between different processes is the automation of the marketing funnel. Automating different tactics and processes can ensure that everything works more smoothly, delivering a frictionless experience to customers and helping them reach the checkouts.

However, the research found that very few marketers have automated their marketing funnel. 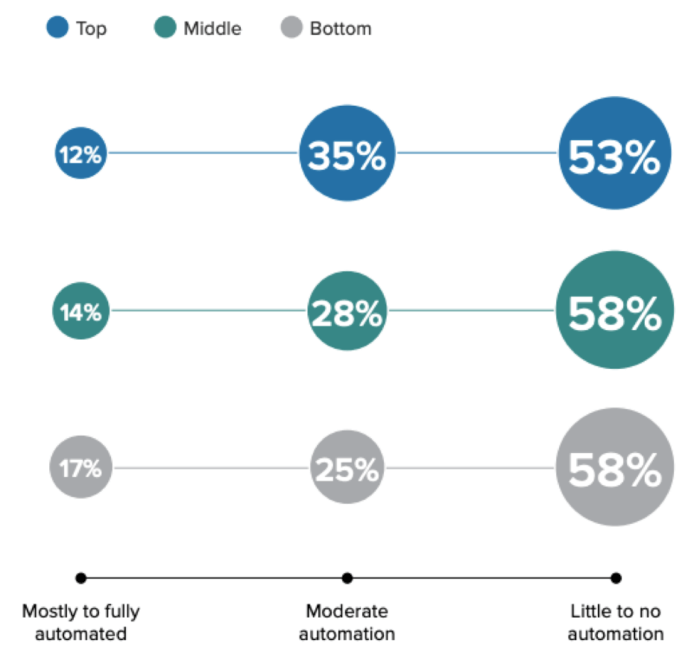 Over half of marketers say there is little to no automation at the top (53%), middle (58%) or bottom (58%) of the funnel. This means they are relying on human-led processes to lead customers through the funnel, which could present a disjointed and delayed experience. 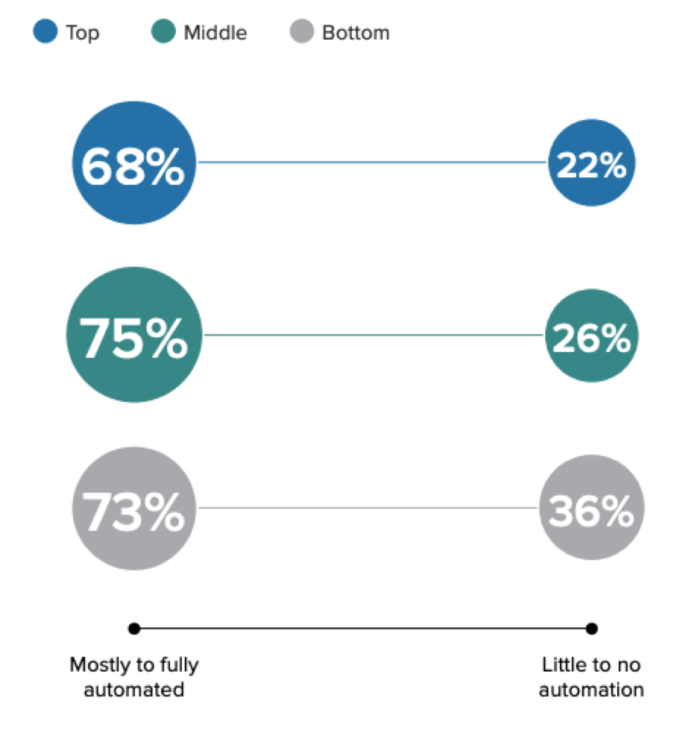 Those who do have automated processes tend to see better performance across the board compared to those with little or no automation. When processes trigger other actions, it can reduce the time it takes for someone to move through the funnel while the improved experience can have a positive effect on your conversion rate.

This is shown by the fact that all marketing tactics were found to perform better across the middle of the funnel when they were mostly or fully automated. All of the tactics also become easier to execute when automation is used, helping to improve overall ROI.

Looking at the tactics you use, at what point in the funnel you use them, how each process can be integrated with the rest of the funnel and the ways in which you can automate communications can all help to improve your marketing funnel.

Rather than focusing on what is working, assessing the full picture with the aim of reducing friction between each step will help you develop a more successful marketing funnel. More importantly, regularly reporting on each step and tweaking your processes will ensure that your funnel continues to you perform.