Facebook is losing its appeal while messenger apps are booming

Chart of the Week: 57% of people in the UK spend most of their time on social media or messenger apps, but Facebook is no longer the favourite app.

Facebook is no longer as indispensable as it once was, with an increasing number of people saying it is the app they most consider quitting. Throughout the last two years, it has fallen from being the most important app in the majority of markets to one that is failing to keep its audience.

As well as people getting rid of their accounts as part of a digital detox, younger audiences are turning to new social media platforms rather than Facebook. Although this means more people opting for Facebook-owned apps like Instagram and WhatsApp, it shows just how volatile the world of social media and apps currently is.

We’ve taken a look at AudienceProject’s new app and social media usage research to see what stats and facts you need to know about in order to better shape your strategy for next year.

People tend to have 20 apps

Looking at the averages across different countries, most people have around 20 apps on their phones (not including pre-installed apps), showing that there are plenty of choice available. 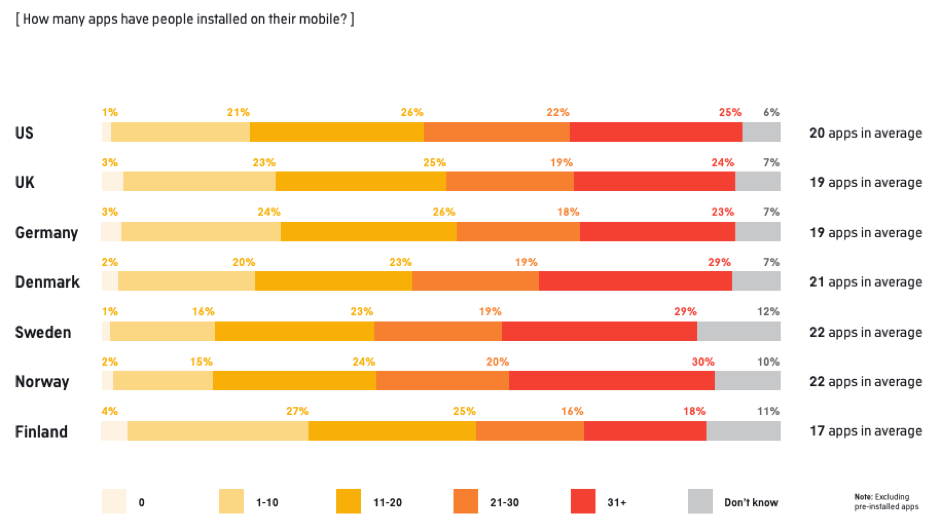 Norway and Sweden have higher averages, with people more likely to have 22 apps installed on their smartphones. In fact, 30% of survey respondents in Norway and 29% in Sweden said that they have 31 or more apps on their phone, showing that they are well connected to different platforms.

This shows that the divide can be quite wide but as smartphones come with more memory built-in and more companies release apps, it is likely that we’ll see these figures rise.

Social media apps take up the most time

When it comes to the apps that people spend the most time on, social media wins hands down. Over half of respondents in Finland (50%), Norway (57%), Germany (52%) and the UK (57%) spend most time on social media or chat apps on their smartphone.

The only country that sees users spend more time on other apps is Finland where 54% of users say they spend the most time on mail apps and 51% spend a lot of time on browser apps. 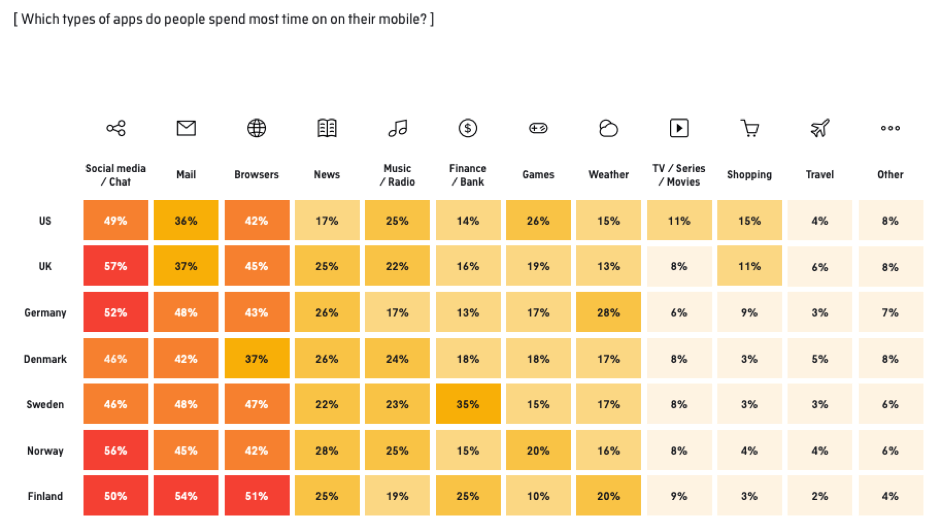 This high level of use of social media and chat apps shows how used to being constantly connected people have become. While this does mean that there are plenty of opportunities in terms of social media marketing, it can also contribute to the increase in feelings of being overwhelmed by social media.

The results also show that people spend a lot of time on their email apps, which also represents an opportunity for marketers. With the high ROI that email offers, creating emails - both triggered and campaign – that are fully mobile optimized could deliver good results.

While Facebook may be struggling when it comes to most countries, it still retains its top position in the US. Some 21% of Americans said that they can’t do without Facebook on their smartphone, making it the most popular app in the country. 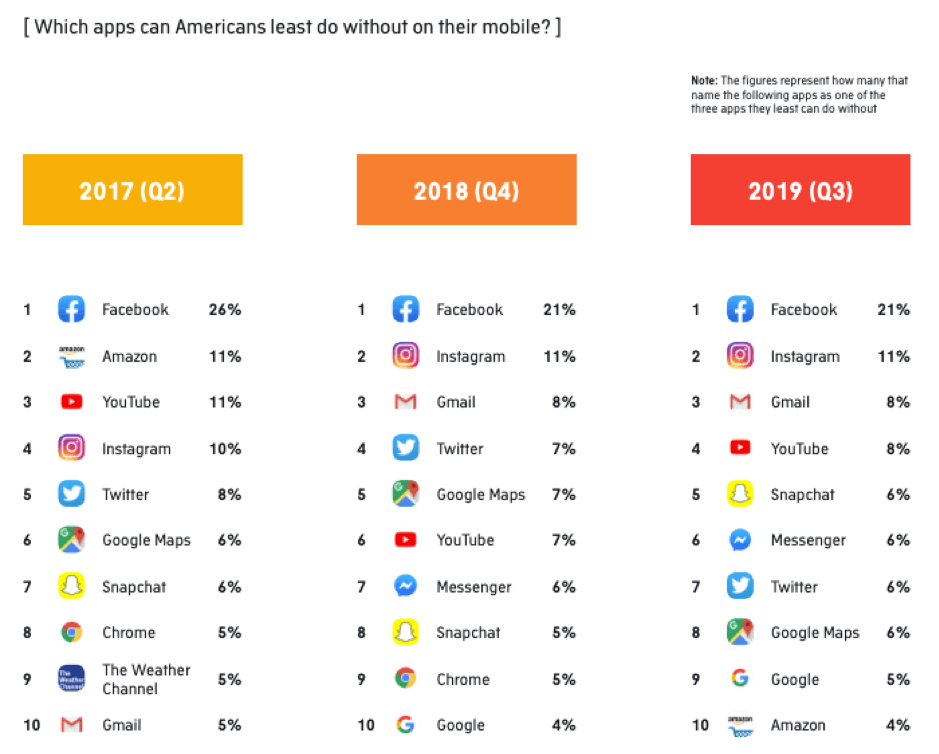 While this still puts Facebook well above the second most popular app in the US –-Instagram (11%) – the figures show that the reliance on Facebook has fallen in the last two years. In Q2 of 2017, 26% of Americans named the social media app as their favourite, but this fell to 21% in Q4 2018. This figure has remained steady since then, but recent trust issues with Facebook could see it fall.

It’s also worth noting that while Facebook is the overall most popular app in the US, it is a slightly different story when looking at younger Americans. Those aged between 15 and 25 really don’t rate the social network, with just 18% saying it is essential, meaning that it drops to fourth place for this age group. 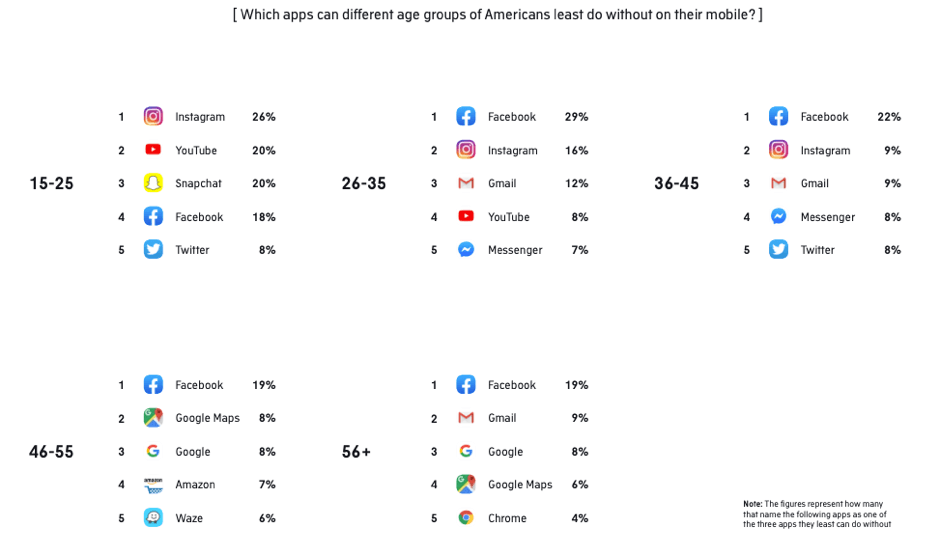 Instead, Instagram is in the top spot, with 26% of this age group saying the app is indispensable. This is followed by YouTube and Snapchat, both of which are viewed as important by 20% of respondents. These findings show that marketers can’t rely on Facebook for all audiences and that they need to go where their audience is.

The old saying “if you fail to plan, you plan to fail” is therefore entirely relevant, and still common for many businesses in the absence of a strong social media strategy.

In the UK, it’s a very different story with WhatsApp being the most important app, as selected by 27% of respondents in the country. This is likely due to the fact that the messaging service allows users to create groups and send media without incurring the extra charges that they would when sending images and videos via text. 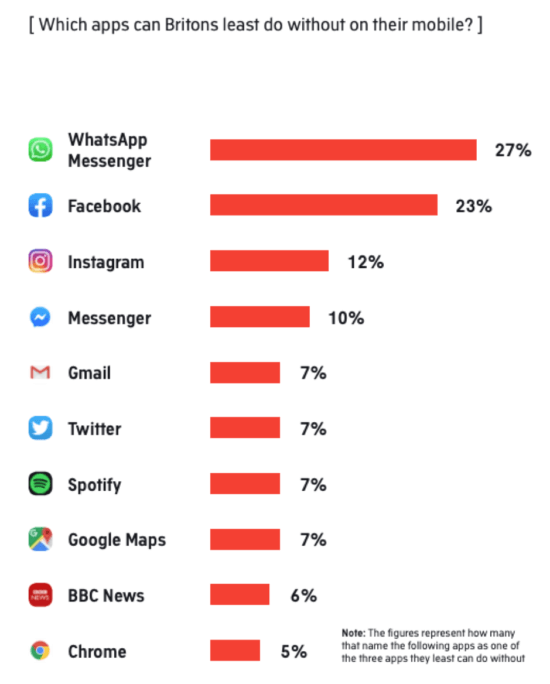 While WhatsApp is the most popular app among Britons, Facebook isn’t far behind with 23% of respondents saying it is indispensable. This is followed by Instagram (12%) and Messenger (10%), meaning that Facebook-owned apps take up the top four positions in the UK.

This is the first time that WhatsApp has risen above Facebook in this survey, as it has been in second place for the previous two years. This year saw it rise by 4% while Facebook declined by 1%. It will be interesting to see if this change continues in 2020.

When looking at age groups, Facebook is only the most popular app for just two age groups – those aged between 36 and 45 and those who are 46 to 55. Otherwise, WhatsApp is the most popular, with Instagram remaining in third place for three out of five age groups. 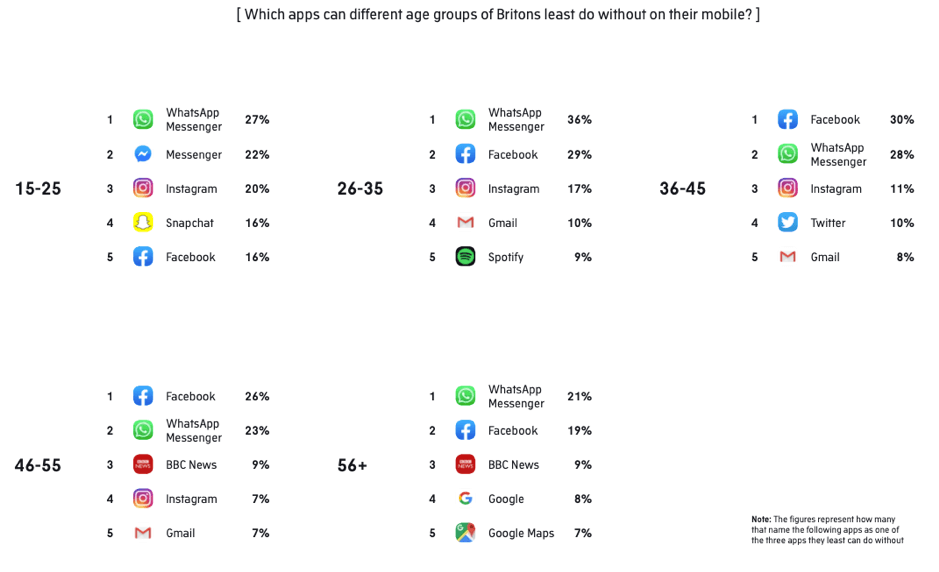 As with the US, those aged between 15 and 25 really don’t seem to rate Facebook, with just 16% saying it is indispensable, putting it in fifth position. This age group in the UK seems much more interested in messaging, with WhatsApp being the most important app and Messenger coming in second. This shows that messaging apps could offer interesting opportunities for marketers.

How many people use social media in the US?

In Q3 of 2019, 71% of Americans use Facebook. While this may seem like a lot, the number has seen a decline from Q2 2017, when 80% of Americans used the platform. This decline means that YouTube, which has seen a consistent increase in users, is now quickly closing the gap and could soon become the most-used social media platform in the country. 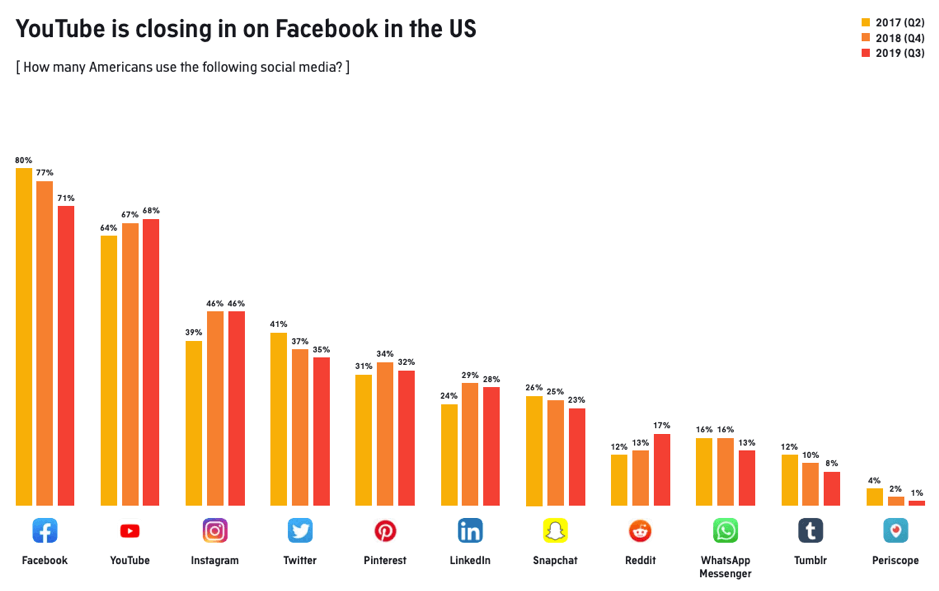 Although Instagram is growing in popularity, especially among younger age groups, it still only used by 46% of Americans, showing that it has a long way to go to get to the top spot. While it saw strong growth in 2018, rising from 39% to 46%, the use of the app has remained steady in 2019.

It isn’t only Facebook that seems to be struggling with declining use, Twitter’s figures also show that its app usage in the US is falling. While it was used by 41% of Americans in 2017, this fell to 37% in 2018 and currently stands at 35%, with a further decline quite likely.

How many people use social media in the UK?

Facebook’s usage in the UK has remained fairly steady in comparison to the US, actually increasing on 2017’s figures to stand at 77%, which is higher than the declining us in the US. While the platform hasn’t seen a big drop in usage among Brits, it is coming under stiff competition from WhatsApp, which has seen a huge increase in use.

In 2017, only 48% of Britons used WhatsApp, but this grew to 66% in 2018 and has seen a small increase in 2019, with 67% of people using it. While growth in the last year has been slight, it could easily overtake Facebook to become the most-used app in the next couple of years. 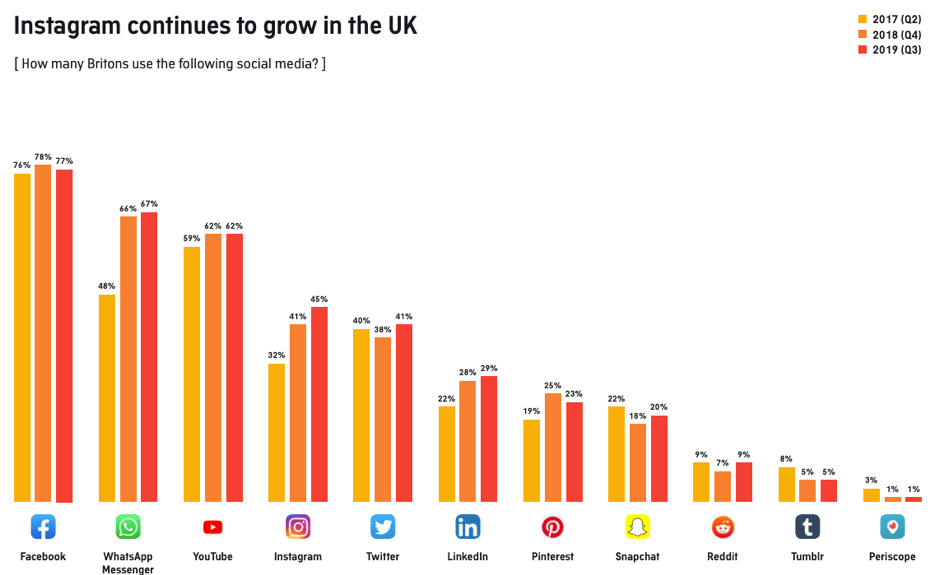 YouTube is also a popular app in the UK, although it hasn’t seen as great a rate of growth as WhatsApp, which has relegated it to the third most-used app. It saw a small increase in 2018, taking it to 62% from 59%, but it has stayed at this level with no further usage increase.

Other than WhatsApp, Instagram has also seen strong growth, going from 32% of Brits using the app in 2017 to 45% using it in 2019. With Instagram now being considered the third most essential app among three age-groups in the UK, this growth could easily continue at a strong rate.

With the rise of other apps, it’s worth looking at which demographics would most miss Facebook. The report found that, on average, it is those over the age of 25 who can do least without the social media platform, showing that the younger generation really is leaving it behind.

When looking at different countries, Norway would most miss Facebook across each of the demographics, although with 49% of those aged between 26 and 35 saying they would miss the platform, this is the best demographic to target on it in the country.

In comparison, Germany seems the most switched off to Facebook across all demographics while the US and UK show that each demographic is starting to rely on other apps.

While Facebook may still be largely top of the pack when it comes to social media apps, it is starting to lose its appeal in a number of countries and across various demographics. As such, marketers need to make their social media strategies broader in order to encompass various social media platforms and apps.

The rise of messenger apps, especially in the UK, shows that there are plenty of alternative opportunities available for sharing marketing messages with audiences. Utilizing Messenger and WhatsApp as part of your strategy could deliver great ROI, especially among younger demographics.

It is also worth bearing in mind that both YouTube and Instagram are still popular options, showing that visual content – whether images or videos – is more important than ever before.

Utilizing a variety of social media platforms will allow you to better target your audiences and deliver the best results.