What do effective integrated marketing campaigns have in common?

Integrated marketing campaigns can be a tricky art to perfect. We live in a multi-media world, which means that new media and old media sit alongside one another, sometimes competing, other times working collectively - in the case of integrated campaigns they work together.

However despite saying all of this, what is it that actually leads to successful results? Consistent branding and messaging, frequency of communications and deciding on your primary medium are collectively important points to factor in. Let’s take a look at some of the most impressive integrated campaigns:

On Christmas Day 2013, comparethemarket.com released a television advert revealing new character Baby Oleg. In January 2014 the campaign went into full swing with an advertisement promoting a cuddly toy to accompany the cute Meerkat. Following this announcement a blog was created for Oleg online, for customers to read, encouraging emotional involvement: http://www.comparethemarket.com/meerkat/blog/oleg/.

Connecting the character from the advertisement with the audience has been achieved by creating a toy and the blog, turning Oleg into a character that can create emotional involvement - integrated collectively these separate parts to the campaign have driven consumer engagement successfully.

The continuous roll out and development on this character throughout the year has proven consistency of the brand and messaging - key factors in creating a solid campaign. These friendly Meerkats have almost become part of everyday life, as they quite literally pop up everywhere.

Originally launch last year O2’s ‘Be More Dog’ campaign, which featured a ginger cat trying to live a dog’s life had been a huge success for the brand. Granted - being ‘more dog’ has nothing to do with mobile phones, but the quirkiness of the integrated campaign is what led its success.

To promote its revamped priority app in May 2014 launched a £7m campaign using England rugby players, Mike Brown and Alex Goode attempting to Be More Dog: in this, we see the cat become a motivational speaker.

As well as television and cinema, the campaign also features outside and online executions, with geo-located mobile advertisements and homepage takeovers on a range of websites, including MSN and YouTube. The O2 priority app in itself is a marketing tool, offering consumers the chance to buy tickets and experiences before anyone else.

This integrated marketing campaign from O2 is so clever it not only intrigues users due to its kooky nature and offers them something extra in the form of priority.

#3 Three.co.uk - Sorry for all the holiday Spam

Launching a package for customers to use their phone in 16 destinations worldwide like they would at home, with no extra cost for data led to 3 having to make one large apology... to the entire nation.

Due to their poor deal, it mean't everyone was constantly on social media whilst on their holiday, encouraging a shed load of holiday spam: photos of beaches, swimming pools, sunsets, tanned legs and of course, food. Along with this there a website was created dedicated to the cause: http://www.stopholidayspam.com.

The first part of the campaign, the television advertisement was enough to get viewers’ attention, but then came customer engagement and interaction. As predicted or at least as the marketers over at 3 had hoped consumers got involved and took holiday snaps using the hashtag #holidayspam. Of course some of those social media posts wouldn’t have been done consciously because of 3, which makes the campaign so clever.

Relevance is the key to this integrated campaign - it was successful by people being able to relate to it, whether they were on holiday, or fed up of everyone else’s holiday spam. The campaign was also consistent with the hashtag #holidayspam included in every part of the marketing collateral.

The most recent Lidl Surprises, ingenious campaign rolled out on the 4th September on television, print and outdoor - accompanied by a larger than normal social media boost.

The TV advertisement shows customers enthusiastically looking at, and purchasing wholesome goods at a little market, which in fact turns out to be a Lidl market - this is followed with the #lidlsurprises tagline, because everyone loves a pun.

The hashtag/tagline has been integrated throughout all channels connecting all elements together. There’s also an interactive website dedicated to #lidlsurprises where you can spin to receive the surprise result of a recipe to cook: https://www.lidlsurprises.co.uk.

The entire campaign is amongst Lidl’s efforts to step away from traditional media, moving into engaging and interacting with its customers on social media and in stores. Mixing both traditional and digital media together offers a smooth transition to a more up to date modern approach for Lidl’s marketing efforts.

This campaign is definitely a step in the right direction, putting Lidl right up against UK supermarket giants like Tesco and Asda. It is difficult to determine the full extent of the success this campaign has achieved yet. Despite this, the social media buzz surrounding it was significant.

Recently, Coca-Cola launched a new product to its long standing line of soft drinks, called 'Coca-Cola Life' along with a month long campaign. Coca-Cola Life fits in the same kind of category as Coke Zero and Diet Coke - another one of Coca-Cola’s attempts to release a healthier option to its main heavily sugary product. 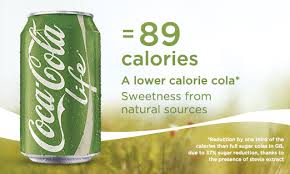 The campaign is being rolled out across 7,000 outdoor locations nationwide with billboards, bus and digital screen ads; these are all being supported by print, digital, experiential and point of sale activity. Although television is not being used the buzz on social media since the drinks’ launch has been mainly positive.

Along with all of the above, Coca-Cola launched a competition - on Saturday 20th September a pop-up shop opened on South Molton Street, London offering customers to not just have a taste of the new Life drink, but also give them a chance of winning a Coca-Cola Life prize - one of those being a long weekend in New York City. Of course, to fulfil the campaign’s integrated position those who were not able to visit the pop-up shop still had the chance to enter the competition by sharing a Coca-Cola Life moment picture online and using the hashtags #CocaColaLife and #comp.

The product is yet to be proven as a success, but as a campaign it’s fulfilling every specification to be a great integrated marketing campaign.

There’s a few lessons that can be learned from these integrated marketing case studies; one of those being that it doesn’t matter if you mix up the media within your campaign, in fact it’s largely positive, you just have to ensure that there is brand consistency across the entire roll out.

The way in which the message is communicated can also alter the effectiveness of the campaign, as can choosing which media should be at the forefront or the driving factor behind your strategy. It can all become a difficult balance to get right but it’s crucial that you do get it right.

Maggie Majstrova is the Studio Manager at Higher Ground Creative, with a background in Account Management and Web Development. You can connect with Maggie on LinkedIn and Google+