Instagram is letting select brands advertise via its 'Stories' feature

Instagram has just announced it is beginning the processes of letting advertisers make use of the large audience its newish 'Stories' feature has been able to generate since its launch back in the summer of 2016. Again taking the lead from Snapchat, it is introducing the ads in a mid-roll format- that is they will appear between stories the user has elected to see. In a way this is not dissimilar from TV advertising, where the user accepts the ads between content he or she wants to see. The format will however allow for the skipping of ads, so as to not degrade the user's experience.

Instagram reports that over 150 million people view stories content every day. Combine this with the fact Instagram users tend to be young, tech savy and have higher than average disposable incomes, and it starts to look like a very tempting prospect for advertisers. Instagram have announced the ads will initially only be from a select few partners such as ASOS, Louis Vuitton and L’Oréal. However this is only to test the system, and they will soon let brands of all sizes buy ads, probably through Facebook's Ad Manager.

If you aren't aware of Instagram stories, below is our coverage from their announcement back in 2016:

Instagram may not have mentioned Snapchat as their inspiration for their new 'stories' feature which has just been released, but for anyone who uses both platforms it is more than a little obvious where they got the idea from...

On the face of it, the decision to try and 'Snapchatify' (It's a word if I say it's a word) Instagram may seem a strange one. Instagram has grown incredibly rapidly to become one of the largest social networks in the world, with a focus on stunning visuals which tend to convey the kind of 'aspirational lifestyle' which defines the archetypal users of the social network. It's such a well-known phenomenon it's even created spin-off TV shows like Channel 4's 'Rich Kids of Instagram'.

Snapchat on the other hand, is all about quick, 4-second videos of you pulling a stupid face or pictures of your cat doing something funny - see Snapchat filter campaign example. The fact the videos are instantly deleted once they are viewed rather than being left for posterity means the channel lends itself to stupid, day to day funny moments, rather than trying to show off.

People seem to like Snapchat's more relaxed vibe, which is about not taking life too seriously. Snapchat has exploded in popularity in recent years, surpassing Twitter and growing to 150 million users in just five years.  Video views on Snapchat are up 400% this year and an e-marketer study found 60% of US Smartphone users under 34 used the platform. 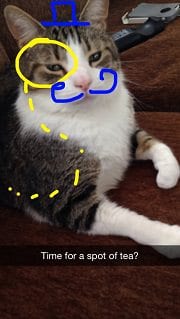 hat's success has not gone unnoticed. Instagram has clearly realised that people like to post content on their main feeds which are seen by everyone that shows them in a good light. But how often do you get a picture of you which you think looks great? Most of the time you just want to share with close friends that you've just accidentally spilled tomato sauce all down yourself or your cat just sneezed on you. So for Instagram the key to getting people to use the platform for is to make it more like Snapchat; relaxed, unserious and care-free.

That is exactly what the new 'stories' feature tries to do. New drawing tools to scribble over your pictures are almost exactly the same as Snapchat's. Photo's and videos will disappear after 24 hours, never to be seen again (Again, just like Snapchat stories). The fact stories aren't posted to the feeds of your followers, and only people coming to see a users' stories will see them means users won't have to worry about overwhelming their followers by overposting. This means users will be more likely to post lots of content, thus boosting their time spent on Instagram. 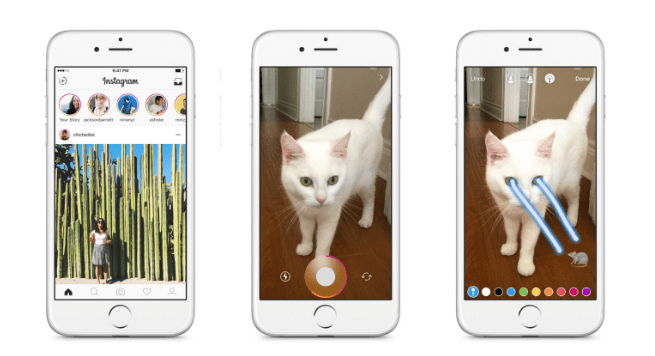 The implications for brands

Stories are another way for marketers to use Instagram to connect with their audiences. Posts to Stories won't get as many views as posts to the main feed as they are only seen by people actively looking for your story. However they also won't affect your organic page reach, so you can post as many stories as you like without worrying that you're diluting your reach. If you can come up with really engaging stories that get fans coming back, you've got yourself a powerful medium that lets you reach fans as much as you like at zero cost. If you already have a Snapchat channel and strategy, a lot of it will be applicable to Instagram stories, as the features are remarkably similar.