Is your data being used to fight the wrong fight?

In the wake of global data disasters, such as the Cambridge Analytica scandal, where an individual’s online privacy has fallen at risk of being misrepresented and misused for falsely priming political agenda - people have undoubtedly become wary of their personal details saved online. However, it’s interesting to see that even though privacy concerns amongst users are high, Facebook daily visits seem to have been largely unaffected by this disaster. 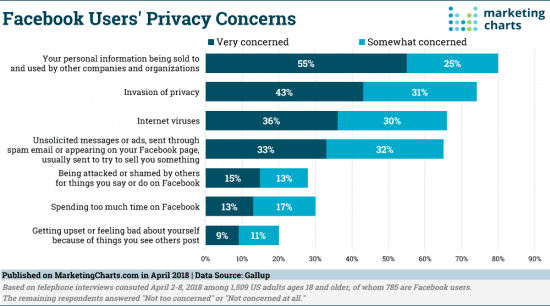 Recent research by Marketing Charts shows that personal data security is the top concern with Facebook. According to a Gallup survey, 55% of Facebook users are very concerned and 25% are somewhat concerned about their personal data being sold to and used by other companies and organization, among many other concerns, such as, internet viruses and unsolicited ads etc.

Moreover, about three-quarters of respondents said they were also concerned about invasion of privacy, from using Facebook, which definitely shows that data privacy has definitely become more of a concern over the past couple of months.

Earlier on, Marketing Charts had carried out another piece of research which highlighted the top companies in the US, based on their public perception. It was surprising to see that only a few of the American Tech companies featured on the top 10 list for brand reputation. What wasn’t as surprising was that Facebook was the worst-performer of the lot, in 51st position.