Facebook rolls out instant articles to everyone on April 12th

Facebook’s Instant Articles is only nine months old. But, given its great success over that gestation period, Facebook has now deemed it developed enough to be unleashed on publishers of all stripes.

What is Instant Articles?

If you not all that familiar with Instant articles, it’s probably because it works so seamlessly you haven’t really noticed it. When you click on an article from a news publisher that uses Instant articles whilst on a mobile device (most of the bigger publishers do now), then instead of being taken to the publishers site and waiting for the whole thing to load, which can often take a fair while on a mobile device and consume a considerable amount of data, you are taken to an Instant articles page hosted by Facebook. This massively improves load times and keeps people within Facebook’s platform, which Facebook likes. Facebook gives the publishers 70% of ad revenues earned from the articles, so the publishers have good reason to sign up. When it was launched there were 9 sites that used it, including BBC news, The Atlantic and Buzzfeed. 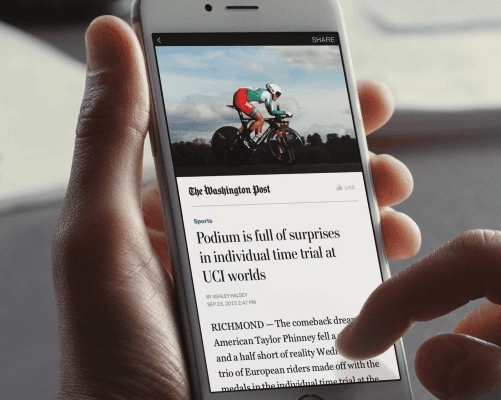 Since launch it's proven a hugely successful model and has helped drive the revolution in consuming content on mobile devices that was already well underway. The original 9 publishers has since become hundreds, but until now it was still only large publishers with the resources to partner with Facebook that had been able to use Instant articles.

However that is all set to change, as Facebook has recently announced that as of April 12th, any publisher can sign up to host content directly on Facebook. This will give a better experience for mobile readers, and could make a big difference if your page currently loads fairly slowly on mobile devices. The Facebook audience network allows publishers to monetise their content very easily, so could benefit publishers who write plenty of good content but struggle to convert that into revenue.

We often say now that in this era of Content Marketing 'Every business is a publisher today'. But should you jump on the Instant Articles bandwagon. That depends very much on the nature of what you are trying to achieve with the content you produce. If you are a content publisher who’s revenue mainly from ads, it is likely to be more than worth signing up. You’ll be able to get more mobile traffic from Facebook and keep your share of the ad revenue earned from those articles, so it has very few drawbacks. It might also save you server costs if capacity is an issue for your site.

If on the other hand, you write content in order to draw clicks to your site in order to convert them (like a SaaS business for example), then it may not be worth it, as keeping the visitors on Facebook’s platform will mean you have a much-reduced chance of converting them. It's also not at all straightforward to comply to Facebook's Instant Articles HTML5 specification unless you do custom development work in your CMS or a plug-in has been created to support this. This alone would mean that we wouldn't do this, at least until a stable, quality WordPress plugin became available.

Overall though this is good news. Instant Articles solves a pain point for mobile users, and now its available to everyone, letting them get the benefits of a better mobile experience that previously was only available to the big publishers. It's not for everyone, but I suggest most businesses which publish content regularly seriously consider implementing it, and only decide against it if the loss of a better chance of converting your customers is worth not attracting more mobile readers.

Let us know if you will be implementing Instant Articles on April 12th or not.