How ecommerce retailers should leverage Facebook advertising in Q1

With shoppers now in post-holiday hibernation and product return rates at their highest, increasing engagement and retention may seem like an uphill battle. So what’s a retailer to do when the road to a strong Q1 suddenly derails?

Tap into one of the most profitable channels for communicating with your customers: social media.

It’s no surprise that social media rules the eCommerce playground. With Facebook greeting approximately 1.37 billion global users per day, social advertising is an obvious win to maximize profit in Q1 and beyond. In fact, about 3 million businesses globally are currently dipping their toes and wallets in the Facebook ad pond. But many find themselves quickly sinking to the bottom because they fail to recognize one cardinal fact when building a successful ad campaign:

Facebook advertising will only generate a positive ROAS if you target your most profitable customers with the right content.

And with a busy quarter in tow, wasting your ad budget on a failed ad campaign is a loss you simply cannot afford...

The key to building a profitable Facebook ad campaign? Start from the bottom

Adobe reports that, on average, you need 5-7 new customers to equal the revenue of 1 loyal shopper. This means that your recurring shoppers yield the highest potential when it comes to driving revenue quickly.

When it comes to Facebook advertising, we believe in turning the conversion funnel on its head by targeting your existing customers first. It’s a simple philosophy: rather than investing a large budget into acquiring new customers who may not convert, leverage the customers who are statistically more likely to convert and use them as a base for attracting new customers. The below funnel illustrates how you should structure your ad campaign in terms of targeting to yield the strongest results: 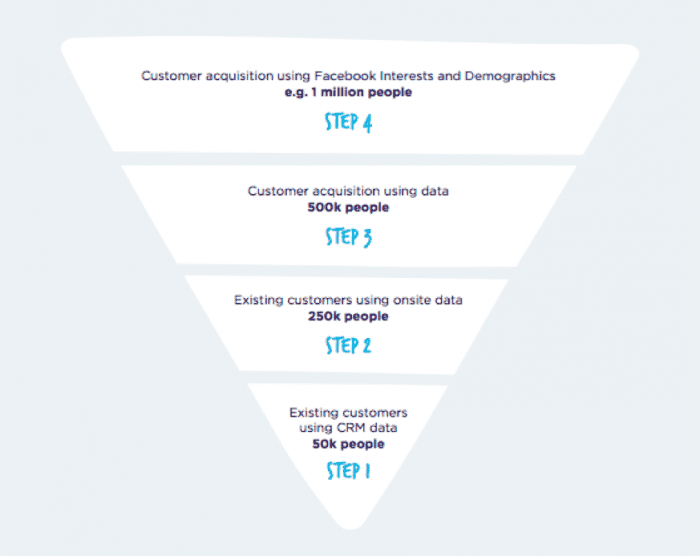 What’s in a Facebook ad campaign? Here’s a look at the different audiences you can build:

The secret weapon to a solid ad campaign: think mobile

Desktop remains a key driver in terms of eCommerce revenue, but mobile is not too far behind. Business Insider data shows that, by 2020, mobile commerce will account for 45% of the $632 billion in total e-commerce sales. Around this time last year, smartphones accounted for 80% of device usage on Facebook - a clear indicator that retailers should consider optimizing their ads for mobile to increase consumer reach.

Ready to attract new customers? Harness the power of visuals

While it’s rather difficult to compete with the likes of baby videos and cat memes on a news feed, crafting a visually impactful ad is crucial to attracting a prospect’s attention. It takes approximately 50 milliseconds to form a first impression - and while targeting existing customers yields the fastest results, acquiring new ones is an important (and the most challenging) step in executing a successful social ad campaign.

The introduction of Facebook Collection Ads is a game changer for retailers looking to rise above the social noise. These ads foster a healthy balance between inspiring your customer and driving revenue for your business. Collection Ads allow you to display a main image in the ad header - such as a creative photo or video snippet. You can then follow it up with a series of relevant product recommendations to support your visual (at Nosto, we call this feature our Collection Ad Unit).

Considering using video in your ad? Here’s why you should

Compelling photos are a great way to target a brand new audience, but video is a wildly popular way of engaging users. Forbes reports that 64% of consumers are more inclined to shop a product after watching a video about it. Thus, we recommend using a video (no longer than 15 seconds) as your main creative in your Collection Ad.

Social Advertising is a strong start to conquering Q1, but there’s plenty more to be done...

Working with thousands of retailers, we recognize the problems associated with surviving Q1. And we believe that the more you personalize the customer journey, the longer you’ll see results.

Join the Nosto team and Smart Insights for webinar on January 17th where we deep dive into eCommerce strategies for Q1 and beyond. From combatting high abandoned cart rates to tailoring the customer journey for higher revenue, learn actionable personalization tips to end this quarter strong and begin the next one even stronger - as outlined in our Q1 Survival Guide - 2018 Edition

Interested in learning more from Nosto? Join Nosto for a free webinar.

Q1 is a challenging time for retailers worldwide, with revenue targets are at risk of being sabotaged by lower profit margins, high abandoned cart rates, and unsuccessful ad campaign strategies: are you equipped to conquer these challenges?

Join the team at Nosto Solutions for a webinar on January 17th where they will discuss crucial roadblocks blocking your path to Q1 success - as outlined in the recently published Q1 Survival Guide - 2018 Edition.

What you will learn:

The webinar will provide tried and tested personalization strategies to conquer common roadblocks in Q1, which include: