An introduction to persona-based segmentation using an example

The beauty of persona-based segmentation is that it provides a much easier grip on the data than almost any other method of presenting Web analytics. Marketers can really use this type of data - and you can see how it lends itself to testing.

We’ve been doing persona-based Segmentation for many years as part of two-tiered segmentation. Indeed, it was the main technique we adapted from days in credit-card marketing to the Web. Persona-based segmentations (typically built using either Cluster Analysis or Neural Nets), are designed to aggregate many separate variables into a multi-dimensional map in which visitors tend to cluster. This sounds very complicated (and mathematically it is - though fortunately other statisticians and programmers have done all the hard work building the tools), but the end result is designed to deliver a much simpler view of digital behavior to marketers. I often describe this type of segmentation as providing the “flesh” on the bones of digital measurement.

An example of persona-based segmentation

Here’s an example I sometimes show from the travel industry of one of our persona-based segmentations: 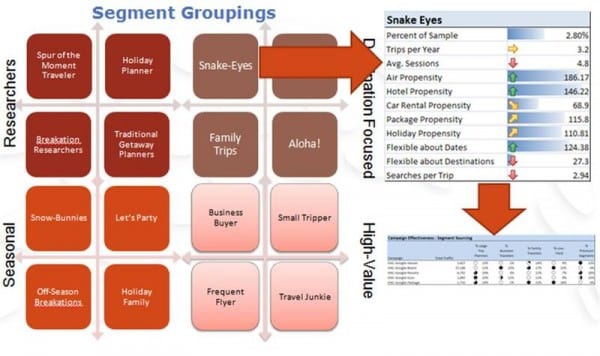 In this case, we described sixteen different persona-based segments to the business (entirely created from digital behavior - though they can and often should integrate offline data and demographics as well) organized along several “uber” dimensions: visitor’s focus on specific destinations, their focus on specific travel-times, their tendency to do trip research, and their tendency to book.

In the screenshot above, one of the personas “Snake Eyes” (gamblers slang for rolling two ones) that focused almost exclusively on trips to Las Vegas is expanded in the spreadsheet to the right showing how this group can be described to the business. The variables we used don’t look much like traditional Web analytics: Hotel Propensity, Package Propensity, Flexible about Dates (well above Index Average for Snake Eyes), and Flexible about Destinations (way below Index Average for this group of people) are typical examples.

Targeting a family-friendly vacation offer is as simple as finding the segments that are strongest in family-oriented travel. Since that’s a variable in the analysis and a dimension along which every segment is ranked, the marketer need to do nothing more than scan a list of top segments by that dimension to create a truly powerful targeting mechanism.

So how does this approach differ from the Two-Tiered Segmentation? The two aren’t mutually exclusive at all, but they aren’t necessarily the same thing either. A persona-based segmentation is a visitor-based clustering. It lacks the second, visit intent/stage type dimension that we use.

On the other hand, it could easily be the Visitor-level segmentation of a 2-tier scheme. That’s something I’ve always realized, but never, perhaps, thought about enough or pushed hard enough for. It’s a great technique for creating a really rich Visitor-based segmentation for ANY type of client regardless of whether or not visitors are known or anonymous. In situations where a large percentage of behavior is anonymous, it may be the only really effective technique for fully describing a visitor.

With persona-based segmentation, you get rich, powerful, data-driven segments that lend themselves to effective approaches to testing and suggest to marketers rich ways to use the data.

By adding our visit-based segmentation dimension to it, you refine your ability to run segmented tests on every aspect of the site including ones (like Customer Support) that may not be particularly suggestive to marketers. You also create a method for drilling down into site areas to understand how effective they are (and where they fail) for each type of visitor. This makes the tie between analytics and testing that much stronger.

The effectiveness of persona-based segmentation in getting Marketers to understand and use the data is something I’ve probably underestimated. It makes me think that more extensive and aggressive integration of personas into our approach would help marketers leverage the system more effectively and generate more and better tests.

Thanks to Gary Angel for sharing their advice and opinions in this post. We asked whether he could share his insights on data-derived personas from a longer-version of this post. Gary is Co-Founder and President of Semphonic, the leading independent web analytics consultancy in the United States. Gary blogs at SemAngel. He previously advised on Smart Insights about strategies to improve site conversion.

How to write an effective Coronavirus-related campaign

Practical copywriting tips and examples for e-commerce websites As Coronavirus spreads around the world, e-commerce websites need messages telling customers what service they can expect from the new normal. A few are doing these really well, but many are falling …..

This is why now is the time to do persona research

I’m sorry to break it to you, but building personas will probably take twice as long as you think it will. Now’s the time to create accurate personas to reap the rewards from doing so. When thinking about personas, what comes …..