How to use social influencers to promote your retail business

Influencer marketing is one of the biggest buzzwords of the decade in digital marketing. It can work for most any type of business, but retail businesses arguably see the biggest potential – it’s pretty much word of mouth on steroids.

In this blog post, I’m going to show you how to use social influencers to promote your retail business.

There are many different types of social influencers and they can be categorized in a number of ways.

For example, one popular form of categorizing influences is by their audience’s size:

You can also categorize influencers based on their type; for example:

However, the best way to choose the right influencers to work with is based on:

Follower numbers aren’t the best way to choose an influencer; instead, a much more important factor is how influential they truly are. It’s better to work with a social influencer who has 10k followers, but who has real influence over those followers, rather than someone who has 100k followers but, in effect, holds little influence (there are all kinds of way to boost your followers that undermine influence – like buying followers).

So, how exactly do you determine this influence?

The best thing to do is study the influencer for a while – take a look at their social media presence, their blog/vlog, and so on to see how they interact with their followers and how many people engage with them.

Alternatively, if you use a tool to find influencers - like an influencer marketing tool or a social listening tool – most will highlight influencers’ engagement and influence scores so you can form a better idea about their success and actual influence.

For example, by using Buzzsumo, you can check important information like retweet and reply ratio, to help you understand how engaged they are:

Another important factor is, of course, the influencers’ relevancy to your business/niche. Namely:

Influencer marketing campaigns perform best when they reach your target audience. After all, you want to promote your products to people who are very likely to want to buy from you.

Spend some time familiarizing yourself with the influencers and the topics they usually cover; check their blog/website, their social profiles, and basically all of their digital channels to see not only what types of topics they cover, but also to determine whether their influencer personality works with your brand and your core values.

So now that you know more about the different types of influencers and how to choose the right one, what sorts of projects can you collaborate on?

Here are a few ideas and examples of amazing influencer marketing campaigns for retail brands:

One of the routes that you can take is to collaborate with multiple micro-influencers at a time and then basically turn them into your very own brand ambassadors.

They still post their own content, but at the same time they’re helping to promote your products and your business too.

They can have as little as a few thousand followers – what’s more important is that they have a very engaged audience.

Asos have used this strategy to great success. They work with numerous Instagram micro-influencers of all sizes, – called Asos Insiders - all with their own Asos Instagram handle: “Asos_(their name)”.

For example, Asos_joshua is an Asos Insider who has about 16.7k followers – his audience is formed of skateboarding fans. He often posts images of himself wearing Asos products and shares the codes of the products he wears so that his followers can easily look them up on the Asos website: 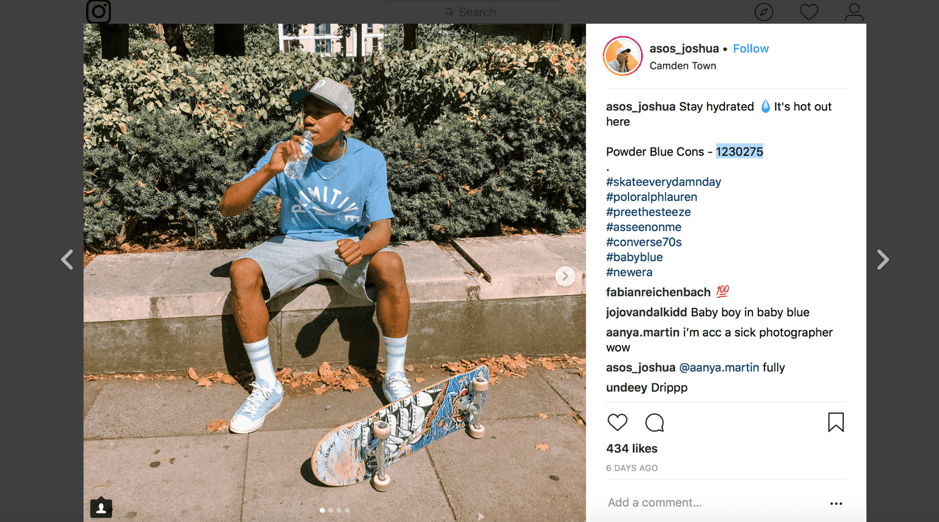 So if they want those Converse shoes for themselves, they can copy and paste the code into the Asos search bar and find them in seconds.

Joshua is one of very many Asos Insiders on Instagram; what’s so great about this strategy is that they collaborate with influencers from all over the world, who have different styles and hobbies, therefore allowing them to promote their entire collection of products.

And even if some influencers are very small – a few thousand followers – they generate amazing engagement per post.

2. Create content to promote an event: Baxter of California

Baxter of California is a men’s grooming and skincare line that wanted to promote their Father’s Day Sale.

In an effort to promote this sale, they put together 2 different campaigns.

The first one was to happen before Father’s Day; they sent the influencers they were collaborating with a list of their products so that each influencer could choose 3. Then, the influencers created pieces of content (on their social media, blogs, etc.) including these products to help raise brand awareness.

The second program happened right before Father’s Day. At this stage, the influencers had to promote a specific product and offer: the Shave Duo Kit, together with a 20% special code and free shipping.

The 2 campaigns exceeded most of their expectations: they produced over 250 pieces of content in total (social media posts, blog posts, photos) and generated 648% more engagement than they expected.

If you have any special events to promote – such as an amazing holiday-themed offer – you can use this model to help boost brand awareness and increase your sales.

3. Put the focus on your customers: Glossier

Glossier is a relatively new beauty brand that has grown very quickly to achieve amazing success (they first started out in 2014).

And a very big part of this success is their social media and influencer marketing strategy; after all, there are a plethora of beauty brands so it is very difficult to stand out from the rest.

So, when they want to promote something, they don’t go to top influencers. Instead, they go to their own fans, the people know and love their products and that ultimately, hold a lot of influence no matter how small their audience is.

Because at the end of the day, most people are much more likely to want to try a product that a friend recommends.

For example, one of their campaigns saw them sending 500 super fans their latest products (the fans who were most engaged and bought from them before). Now, there are literally dozens of Glossier-related hashtags on Instagram, all with thousands of posts:

User-generated content can yield amazing results because it’s essentially the best form of marketing ever: word of mouth.

So if you have a passionate fan base, you can try leveraging them instead of influencers: send them products for free, engage your biggest fans and reward them for their loyalty, and encourage your fans to post images and videos of themselves using your products. There’s no better ad than regular people raving about your products.

As you might’ve noticed based on the previous examples, most campaigns actually focus on smaller influencers and even regular people. That’s not to say there aren’t plenty of campaigns with the superstars of the Internet, but authenticity seems more important than ever – and that’s easier to achieve with smaller influencers.

Get insight into 10 e-commerce trends for 2019, structured through our RACE Framework, with our comprehensive online guide.

Access the Raise your Ecommerce Conversion Rate with Online Chat