How to boost conversions with micro-influencers

5 Ways to Increase Your Conversion Rates with Micro-Influencers

Does size really matter? When it comes to influencer marketing it does, but not in the way you think. Influencers with a smaller following tend to have a much bigger impact on conversions.

They’re called micro-influencers. And although they have fewer followers than top influencers and celebrities, their reach extends to a highly-relevant, targeted audience that is more likely to buy your product.

In this post, you’ll learn all about micro-influencers, and how you can work with them to boost your conversions.

A Closer Look at Micro-Influencers

Micro-influencers, as their name suggests, are influencers who have a relatively small following compared to other influencers. There is no exact number of followers to define these influencers, but some general qualities can be outlined.

According to Mavrck, they are “everyday consumers” with a following size of 500-5,000 people. Based on this definition, micro-influencers are like regular people, just with a slightly larger than average audience.

According to these three definitions, micro-influencers are individuals who have anywhere between 500 and 100,000 followers.

How to Work with Micro-Influencers for Increased Conversions

Despite Mavrck’s definition, many micro-influencers aren’t just regular people, or everyday consumers. Many of them are subject matter experts, and the people who tune in to their updates are interested in those specific subjects.

Their opinions and recommendations on the specific subjects they specialize in are considered trustworthy, and often result in higher conversion rates. Here are five ideas to help you harness the power of micro-influencers to drive conversions:

Although micro-influencers are subject matter experts, they’re also just regular consumers. And when they find a product or a brand they really love, they often willingly promote it. Often without any monetary compensation. They can be your biggest brand advocates if you can turn them into actual fans.

When a micro-influencer truly loves the product they’re promoting, it shows in the content they create. Their positive reviews are seen as more authentic, which in turn can convince their audiences to try out the product.

This is what worked so well for Koa Organic Beverages, according to a case study conducted by HYPR. Koa is a brand of organic beverages that contain organic minerals, antioxidants, vitamins, and electrolytes present in fruit. It doesn’t contain any preservatives or additives, making them perfect for health-conscious consumers.

The brand launched an influencer marketing campaign with a community of seven yoga influencers who specialize in health, fitness, and valued organic products. The goal was to create brand awareness among an audience that’s interested in health and fitness. At the time of the campaign, each of the influencers had no more than 100,000 followers, putting them in the micro-influencer category.

Koa sent out samples of their products to these influencers, who then turned into huge fans. The product fit with their subject matter specialization, which helped the brand connect with a highly relevant audience. Yoga influencers like Andrea Taylor (@move_yo_asana) featured images of the products in their content, and promoted its benefits in their captions. 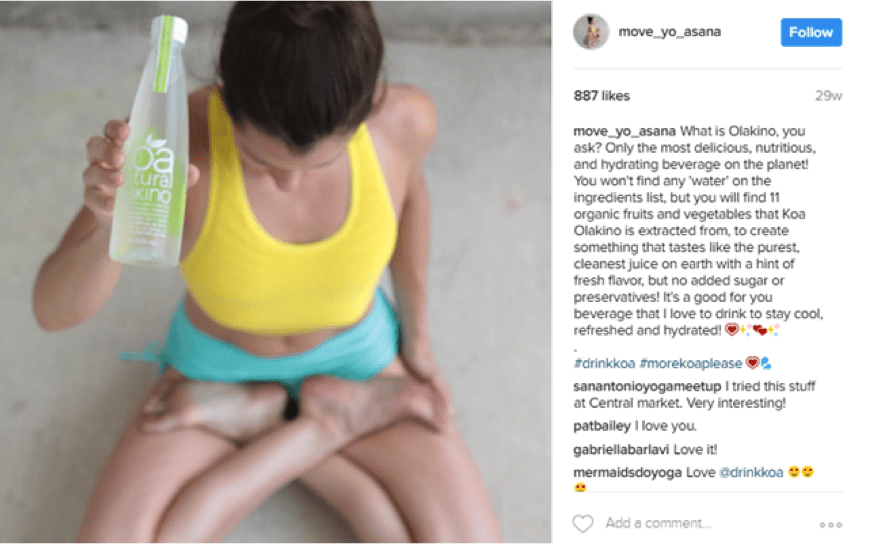 Through the campaign, Koa reached almost 500,000 individuals, and generated more than 10,200 likes. And they do so without having to spend anything extra, proving the cost-effectiveness of micro-influencers. All they did was choose relevant influencers whom they thought might appreciate their products, and then sent those influencers their products for free.

Having a micro-influencer promote your product will ideally stir the interest of your target consumers. But in some cases, those consumers may need an extra nudge to get them to take action. When they see someone they admire raving about a product, they might check it out, but fail to take the final step of making a purchase.

To further improve your chances of converting those consumers into customers, you can give them something that will compel reciprocity. Perhaps have the influencers promote unique discount codes, so that their followers receive a special price on their first purchase. Or have them promote a link for a free trial of your service.

For example, Supursestyle promoted a unique discount code through style and fashion influencers like Lauren Recchia (@northofmanhattan), who has about 56,000 Instagram followers.

Supursestyle is a service through which customers purchase authentic designer handbags. They chose to work with relevant micro-influencers to reach their target consumers who are interested in designer clothing. 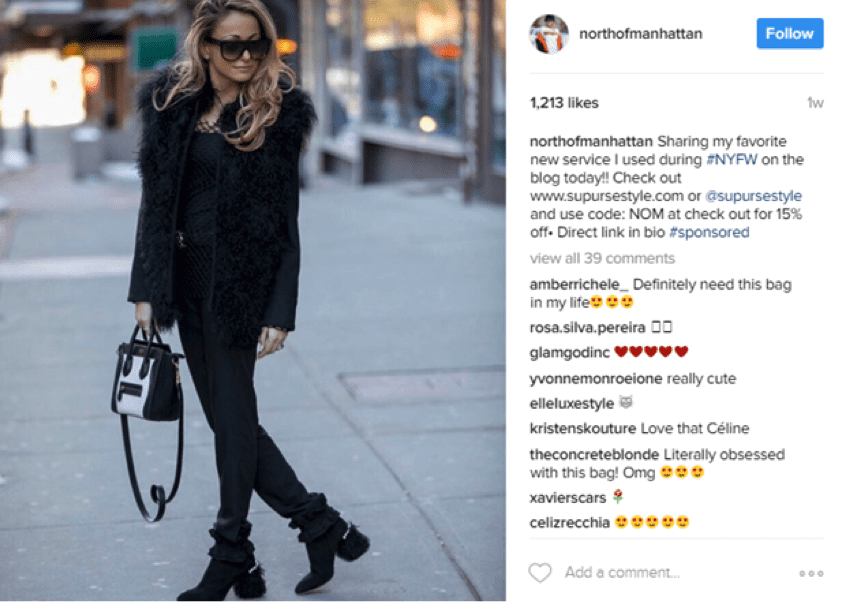 When using this type of promotion, you can set up a payment contract where the influencer earns a percentage, or a small sum for each conversion they help to generate. You can track their conversions by using a unique URL or discount code that matches each influencer’s name or social media handle. This can effectively help you track your conversions while ensuring that your campaign is yielding the desired results.

#3: Have Micro-Influencers Create Tutorials and Guides

Before people decide to buy your product, they may want to have a better understanding of how it works. It may not be enough to simply have the influencer feature your product in their content. Sometimes, you need to show the product in action to inspire people.

According to a study funded by Experticity, people consider micro-influencers to be better than regular people at explaining how a product works. So have micro-influencers create tutorials or guides for your product. When people see exactly how the product works or is used, it may compel them to buy it and try it out for themselves.

This strategy worked effectively for PepsiCo to promote their Quaker Oats, according to a HYPR case study. The PepsiCo team worked with a community of micro-influencers and regular influencers, who posted Instagram images featuring the products. The images included recipes in the captions so their followers could recreate them. 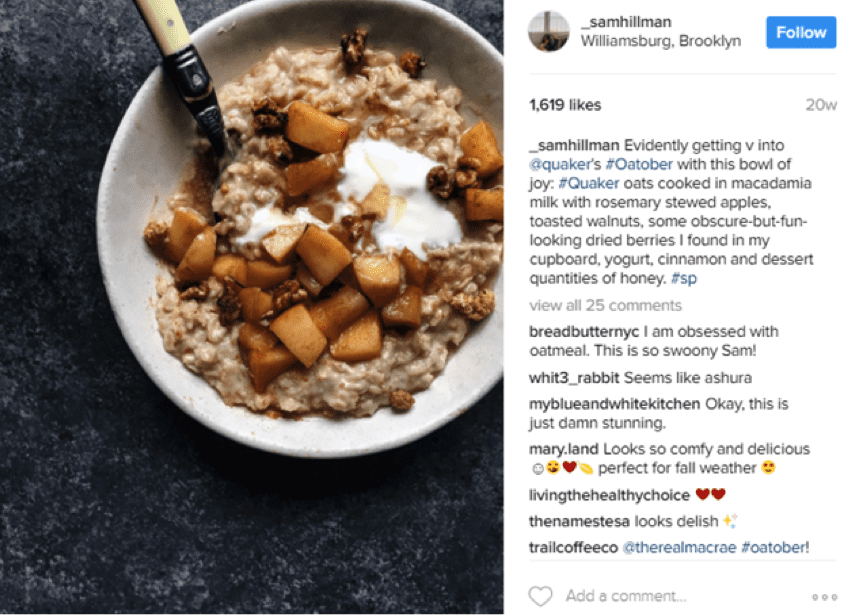 As seen in the screenshot above, food influencer Samantha Hillman (@_samhillman), who has about 27,400 followers, created her own recipe using Quaker Oats. The idea was to instill in the audience a desire to try the product, so she provided them with an easy-to-follow recipe that encouraged her followers to test the product themselves. 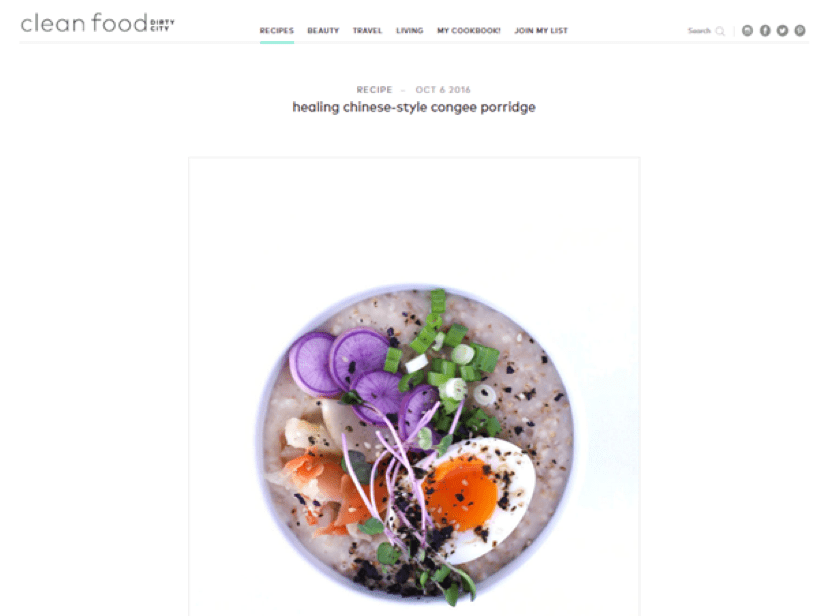 During the event, you can provide them with an exclusive preview or demonstration of the product. You can even provide them with free samples as a method of payment. They can then share their experiences at the event with their social media followers, at the same time creating product awareness.

Another HYPR case study highlighted how PAX Labs promoted the launch of their new products by inviting influencers to a sneak peek event. They held two events - one in Los Angeles and another in New York - where they invited a combination of micro-influencers and regular influencers for an exclusive preview.

The New York event included photographer and cinematographer Kevin Ornelas, who has around 75,600 followers. He posted a photo of a model using one of the PAX Labs products, which was distributed to influencers at the event. 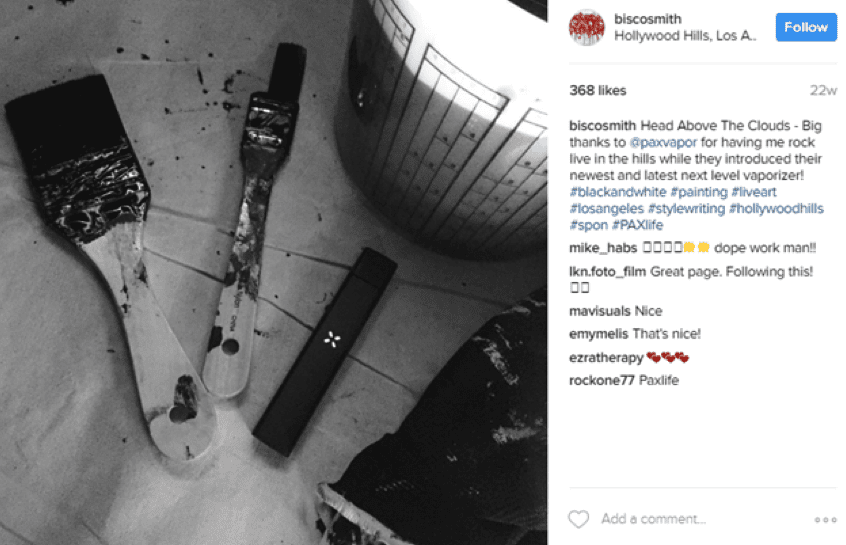 All 18 influencers who were invited to the event showed up. They created 21 posts without any extra compensation, and reached more than 1.6 million people. Their posts generated a total of 30,746 likes as of October 2016.

#5: Have Micro-Influencers Review Your Product

The previously-cited Experticity study found that 82% of consumers would make a purchase decision based on the recommendations of a micro-influencer. This suggests that what a micro-influencer says about your product can have a huge impact on whether or not people buy it.

Have micro-influencers honestly review your product to win the trust of your target audience. You can send some them samples of your product, or invite them to try your service for free. Let them know that all you need in return is for them to share their genuine opinion about the experience. Consumers can easily see through reviews that are too promotional, but micro-influencers are known for their authenticity.

When the review is authentic, you stand a better chance of winning over a new audience. You can even encourage the influencers to mention any negatives about your product/service they find. This will help reinforce the positive things they say as honest and genuine, which will improve your chances of driving conversions.

Trendy Butler used this tactic by sending out one of their boxes for free to men’s fashion YouTuber, The Kavalier, who has around 6,500 subscribers. The YouTuber created an unboxing video in which he reviewed their service, and provided his viewers with his honest opinion about it. 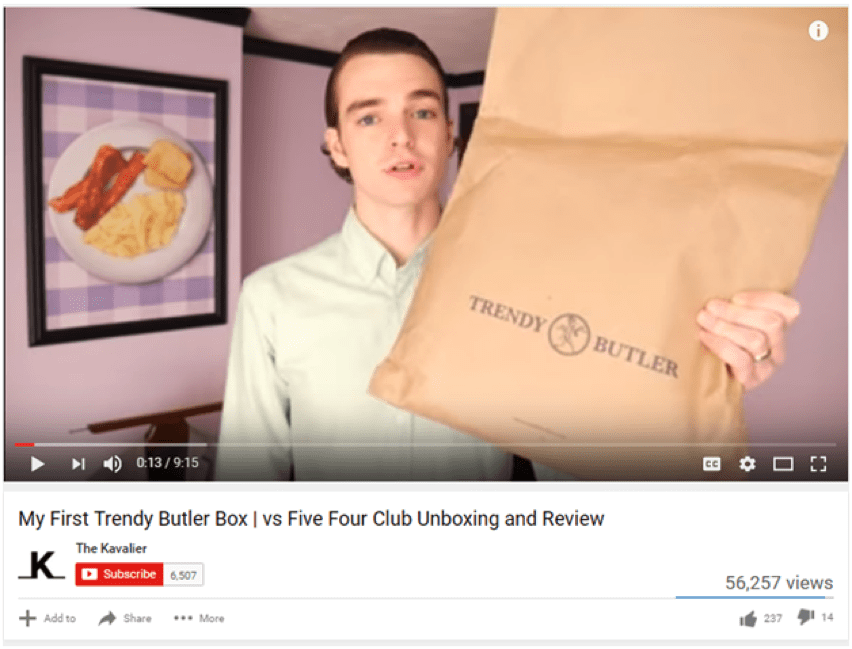 He did not hesitate to mention how the chinos he received in the box seemed a bit thin before he tried them on, and how the shirt didn’t fit too well. He also talked about how the pants fit him surprisingly well, despite them being slightly too short.

The video included thorough coverage of the various benefits of the subscription service. He briefly compared the service with another men’s fashion subscription service, and listed some of reasons why he liked Trendy Butler more. The Youtuber also included a disclaimer in the description which stated that, although Trendy Butler sent him the box for free, the video wasn’t sponsored, and there were no editorial strings attached.

What worked here is the fact that although the service sent the influencer free items, they encouraged him to share his honest opinion. They did not pay him anything extra, or try to control what he wanted to say about their service, which made the review authentic and believable.

These are some of the most effective ways you can work with micro-influencers to increase conversions. Before you launch an influencer marketing campaign, keep in mind that authenticity and relevance are huge factors that affect whether or not your efforts will actually pay off.

Which of these tips will you try first? Do you have any questions regarding the points covered here? Feel free to share your thoughts in the comments, or you can get in touch with me for more guidance on working with micro-influencers.

Shane Barker is a digital marketing consultant that specialises in sales funnels, targeted traffic and website conversions. He has consulted with Fortune 500 companies, Influencers with digital products, and a number of A-List celebrities.