Chart of the day: Digital Ad Spend grows at fastest rate in  9 years

In April each year the IAB and PwC publish their regular survey giving full-year figures for online advertising in the previous year. 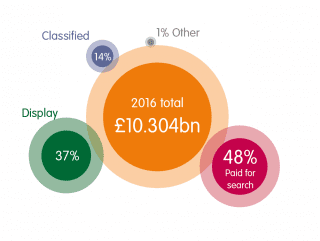 We recommend using this annual research on online advertising to benchmark your investment in online media with other organisations in the UK at a top level.

The main headline from this years analysis which should prompt review of which channels are being used to engage audiences is about mobile.

Driven by advertisers’ need to tap into people’s rising use of mobile to watch content, digital advertising grew at its fastest rate for nine years – by 17.3% to £10.3 billion in 2016 – according to the Internet Advertising Bureau UK / PwC Digital Adspend report. The last time annual growth was higher was 2007 .

This chart shows the increase in mobile spend across the channels: 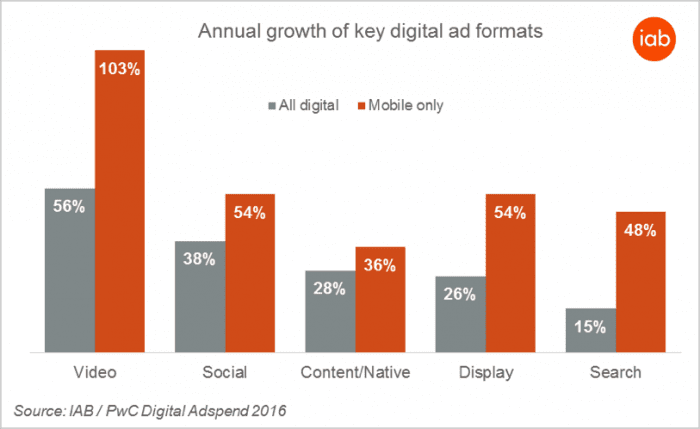 Other headlines from the latest UK ad spend report are:

This research can be used to have an impact when discussing with colleagues how much a company should spend on digital media. Back in the 2011 IAB report it was reported that more than £1 in £4 of ad budgets were spent online  for the first time and online ad spend is now closer to 40% of all spend although the figures weren't disclosed in the latest announcement.

New May 2017 research from WARC summarises ad spend across online and offline channels. It shows the continuing importance of TV. 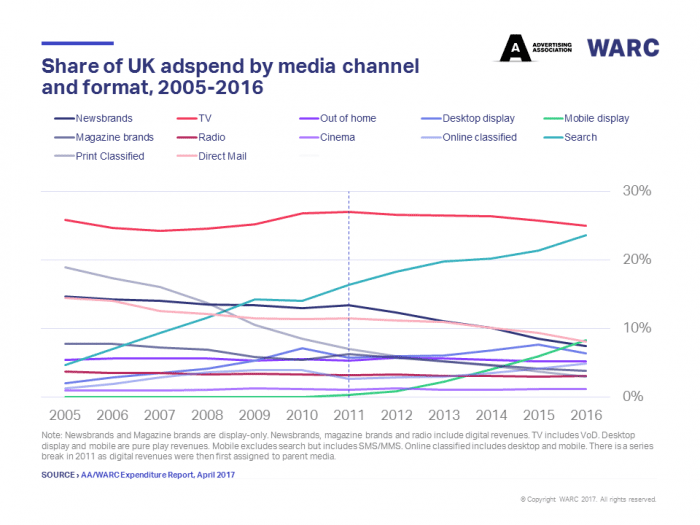 The WARC analysis shows the continuing importance of offline, in particular TV, although other media such as printe have declined. They note:

The picture that emerges is truly remarkable. We can see that, at approximately 25%, TV’s share of total UK advertising spend has held steady over the last decade. This despite the rise of online pure play formats, particularly search and mobile display. What this suggests is that, far from cannibalising TV spend, online ads have been used in conjunction with TV campaigns over this time.

The latest Figures on US online ad spend are available from the US IAB.