It’s now over two years since Google last made a major update to its interface and report when it launched (version 5) in Beta as described in Dan Barker’s post. Since then, there have been regular updates and we have highlighted the most important in our Google Analytics updates channel. This new update is one of the more significant and useful - definitely worth an alert.

Google always has interesting announcements on major updates at its annual partners conference. This year, it’s focusing less on new technology as it did with last year’s announcements about Universal Analytics. Rather it’s tackling the “elephant in the room” for analytics which is the relative lack of use of analytics by non-analysts shown in research by the Digital Analytics Association.

This focus on making analytics more actionable which we’re proponents of at Smart Insights is shown by it’s Act > Empower > Access positioning shown below that was the theme of their conference and is a good model for increasing the use of analytics within an organisation.

So what are the new features? Well, I was prompted to check the above since I was checking analytics this morning and noticed two new reports you can see on the right.

If you’re familiar with GA you will also notice these changes in the grouping of reports:

So we now have a simple ABC mnemonic to help get focus! It could take a while to get your bearings with the menu name changes and I’m sure some will argue that Traffic and Content are clearer. But I like the focus on what you’re looking to achieve through your marketing - it’s similar to our Reach > Act > Convert > Engage RACE Planning Framework. No room for long-term engagement though - that’s difficult to crack without setting up a segment of existing customers through a custom variable or dimension in Universal Analytics... 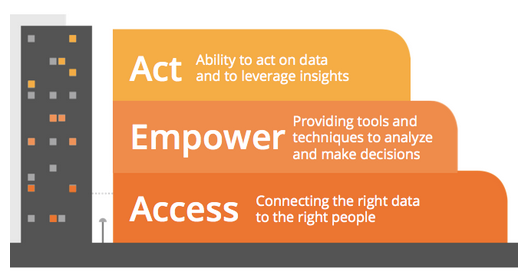 This new Channels report shows that ABC is included within a single report - contrast that with previously and in other report where you had to select from a subtle Goals or Ecommerce tab to see the valuable outcomes from the site or set up a custom report which is what I usually do when working with clients.. 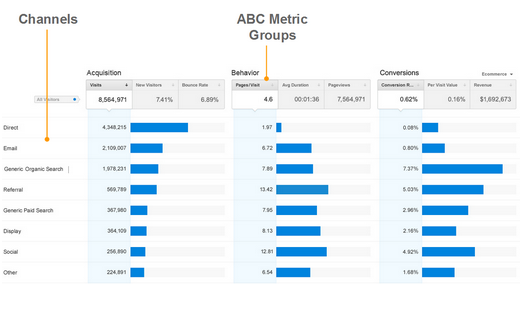 Much better to have the whole conversion funnel together - showing 3 of what I call the VQVC measures - Traffic Volume, Quality and Value side-by-side. Cost is also available through the Cost Analysis feature. You can change the goal for Conversion too - nice.

The reports themselves are really useful additions I think. What about you? Have you seen other updates worth sharing?