Should we start using Universal Analytics now it's out of Beta?

This post was prompted by a question in our from from an agency advising a publishing company asking whether they should use Classic Google Analytics or the new Universal Analytics in future.

"Bringing Universal Analytics out of beta means that all the features, reports, and tools of Classic Analytics are now available in the product, including Remarketing and Audience reporting".

When will update to Universal Analytics become mandatory

Google's update doesn't mention if and when classic Google Analytics will be required although they have said that the intent is that all users will eventually have to upgrade to Universal Analytics. They have developed the Universal Analytics Upgrade Centre recently which should be your first port of call to decide the approach. You can see many of the respondents to last year's poll below have already upgraded, including us!

The advice later in this post suggests you should run classic and Universal Analytics in parallel and this remains valid, so if you're not doing that for your site we advise this.

In our previous post comparing the new Universal Analytics, we mentioned that when you’re creating a new Account on Google Analytics (or a new property on an existing account) you’re given that choice as shown by the feature comparison in the image below. We said this gives one of the best ways of reviewing the differences for those who haven’t seen it yet - but this hasn't been updated yet - so currently in error.

How are you responding to Universal Analytics?

Later in this post I will summarise the Pros and Cons shared by the analytics experts who kindly contributed their views and experiences - thanks to Dan Barker, Peter O’Neill and Tim Leighton-Boyce! But first, I thought it would be interesting to see how readers are tackling this, so please vote in our poll either based on how you’re approaching this for your site or your clients.

If you’d like to know more about UA, see our introduction post asking how relevant is Google ’s new Universal Analytics to my business and Brian Clifton’s infographic showing what’s next for Google Analytics?

This is Google's summary of the difference from account setup (currently out-of-date 2nd April 2014) and their help page. 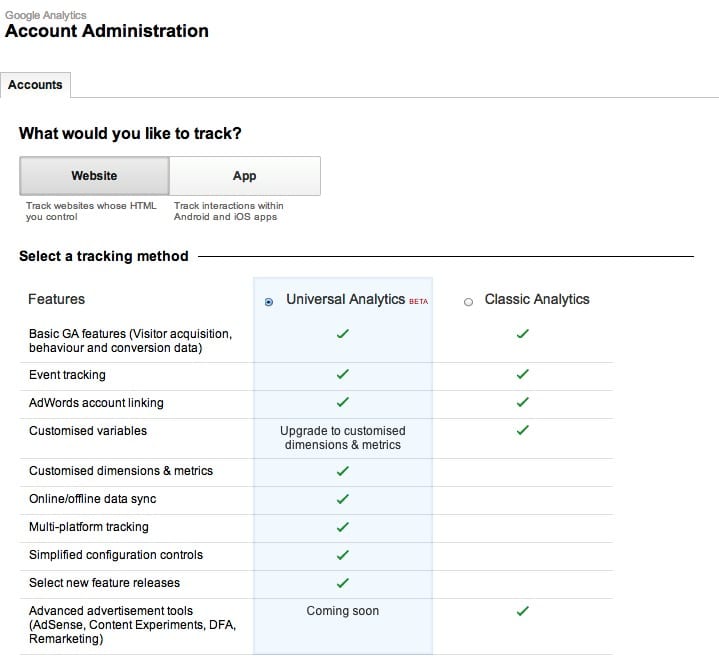 In our forum question, Ecommerce and Analytics consultant +Dan Barker makes these recommendations which are useful to be aware of:

Dan says, that based on these factors, Dan advises:

“If the client has a very strong will to try out universal, I would run it alongside. If not, I would wait until the ‘upgrade’ point arrives (or until there’s a clear timeline for that)”.

Similar advice is also made by +Peter O’Neill of L3 Analytics:

“For clients not working on GA implementation currently, I would not advise they switch for sake of it. But to identify the additional insights & business questions they will be able to answer and weigh this up against the cost. Given my preference for use of page level custom variables, this could prove quite valuable to a lot of companies”.

Again he says that if resources are available, I would implement both as should not cause issues. I do expect within a few months to be recommending UA for new implementations and for upgrades (retain existing classic GA implementation for upgrades).

"The future is clearly with UA. It’s a hugely different system, with a fundamental change in concept: very little done in the client, most of it done on the servers. That’s bringing much power and flexibility. Already features like the Custom dimensions + Metrics, and the Measurement Protocol for sending all offline data for integration into the system is opening up all manner of possibilities.

So I would get going with UA as soon as possible and start building history there and doing all new custom variable type work using custom dimensions and metrics, for example".

But Tim, cautions everyone to remember that there is a new set of data needed for UA and all the history is currently in Google Analytics, so it is not a decision that should be delayed too long.