Email marketing
Chart of the Week

A huge part of improving email performance is benchmarking against industry standards to see where you are above or below average. The latest Epsilon ‘Email trends and benchmarks report’ takes a look at Q4 2018 to see how emails performed compared to the rest of 2018 and previous years.

The majority of email metrics for Q4 stayed relatively stable compared to the rest of 2018. Emails that were triggered by specific actions taken by website visitors or customers received fairly strong results while business-as-usual (BAU) emails stayed stable.

This spreadsheet provides a template for marketers to create a messaging sequence that supports their business for the range of potential event-triggered campaigns.

Overall, the fact that BAU emails managed to stay relatively stable throughout Q4 is good news, especially as many businesses send out more emails during the holiday period. An increase in promotional emails can result in a dip in metrics but open, click-through and click-to-open rates were all on-par with the rest of the year. 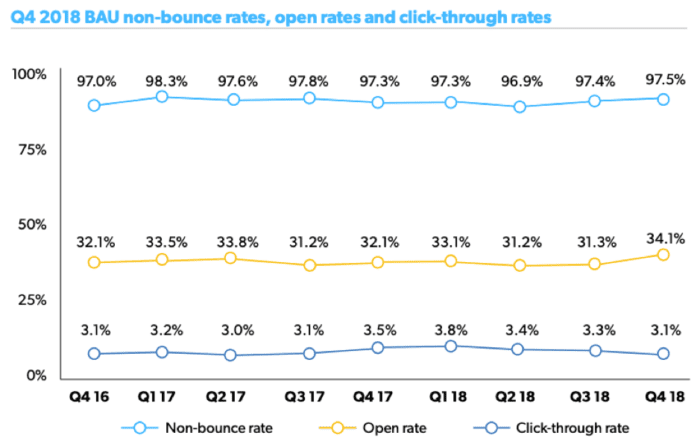 Looking at 20.7 billion emails across a range of industries, the report shows that open rates dipped slightly compared to Q3 2018, standing at 29.4% compared to 31.3%. They were also slightly down compared to the same period the previous year when open rates stood at 32.1%.

It is expected that the open rate is lower in Q4 than Q3 due to the high volume of emails sent between the start of October and the end of December. It also makes sense that YoY figures were down when you consider that the same period in 2017 saw 18.4 billion BAU emails sent compared to 2018’s 20.7 billion.

When broken down into industries, consumer and business publishing/media general saw the strongest email performance improvements during Q4. While the open rate in this industry is still below that of financial services, automotive, consumer services general and travel/hospitality services, this industry saw its open rate increase by over 5% year on year.

In addition to an improved open rate, the click-through rate, unique open rate and unique click-to-open rate all saw strong year-on-year improvements when many other industries saw YoY declines.

Comparatively, while the automotive industry has an average open rate of 42.6%, its click-through rate is below consumer and business publishing, suggesting that readers are not as engaged with the content.

In terms of results based on the type of message, legal emails had the highest open rates of any other type of email messages, which isn’t really surprising. However, it is editorial/newsletter messages that had the highest unique click-to-open rate, which came in at 21%. 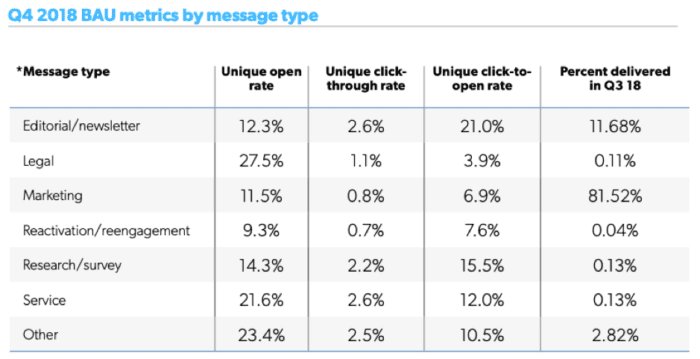 The number of marketing emails also increased from the 74% sent in Q3 2018, showing just how much marketers compete for space in inboxes as the holiday season starts.

Triggered emails that are delivered because the recipient performed a certain action consistently outperform BAU emails. This type of email is much more personalized, making the messaging relevant. Not only does this mean triggered emails are an effective option as standard, it also means they are likely to be a key part of your email marketing strategy during busy seasons.

Overall, triggered emails accounted for just 1.6% of total message volume in Q4. While this percentage is lower than previous quarters, it is due to the large increase in all emails included in the report and there will still around 4.4 billion triggered emails sent during this period. 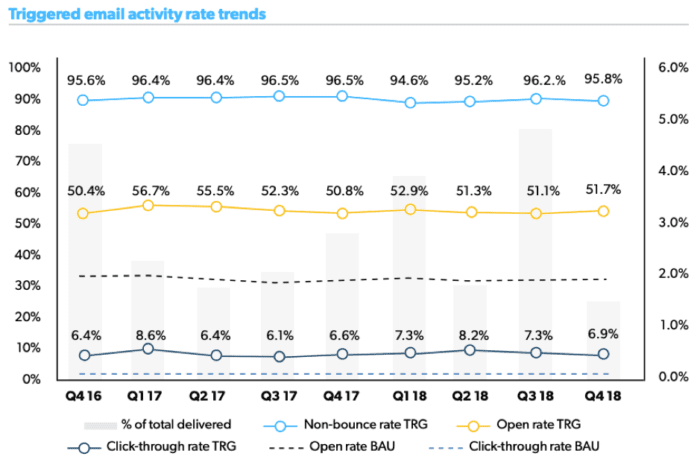 Triggered email open rates were a huge 76% higher than BAU emails while the click-through rate, on average, was 6.9%, putting it as more than double that at BAU.

The industry that saw the strongest performance in terms of triggered email open rates during Q4 was travel/hospitality travel service, which has a 69.6% rate. This is to be expected, as people performing certain actions on sites within this industry are likely to be looking to make a purchase. This is also why this industry had a high 10.% click-through rate for triggered emails. 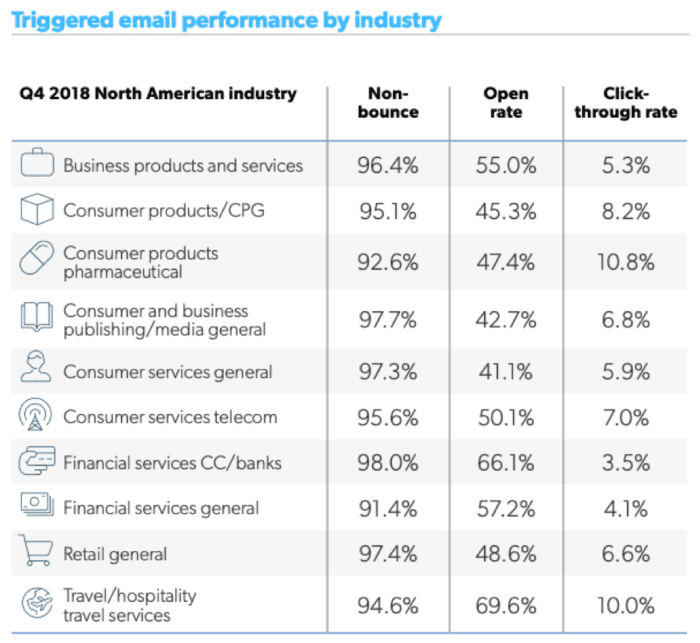 In comparison, retail general only had a 48.6% open rate and 6.6% click-through rate for triggered emails. This suggests that competition for this email type is also increasing as consumers expect offers or personalized emails to be sent after performing actions, such as adding products to their basket before leaving a site.

The increasing volume of BAU emails means that brands need to stand out from crowded inboxes in order to get opened, let alone to engage someone enough to click through to a site and make a purchase. One way to do this is personalization, as more consumers want that personalized experience throughout every part of their journey.

While you may not be able to personalize all messaging within BAU emails, it could be worth looking at ways you can ensure you are sending the right message to the right person. This can mean tailoring product recommendations or the message type to customers’ preferences. This can be based on their activity or you can include a checklist of topics on your email signup form, enabling customers to choose what they receive.

Although triggered emails still continue to perform well, these are starting to clutter up inboxes as well. Brands can no longer rely on the same offers or messaging if they want to get noticed by savvy shoppers. Refreshing your triggered emails regularly will ensure that regular website visitors aren’t seeing the same messaging.

With email still providing great ROI, perfecting your messaging and send strategies can ensure you see the best results and don’t get left behind by the competition.