New Gmail tabs – what email marketers need to know and do

December 2013 update: Return Path have released a comprehensive study evaluating the impact of Gmail's tabbed inbox. We have added it to the end of Tim's post to enable readers to compare their open and delivery rates in Gmail.

In August 2013, Google made two important changes to the Gmail inbox that all email marketers need to understand.

The two changes that Google have made are distinct, but have been introduced together.

These changes are being automatically rolled out to all Gmail users.

As Gmail users access their inbox they will see this popup to inform them about the inbox change:

Then the Gmail web interface looks like this with the tabs 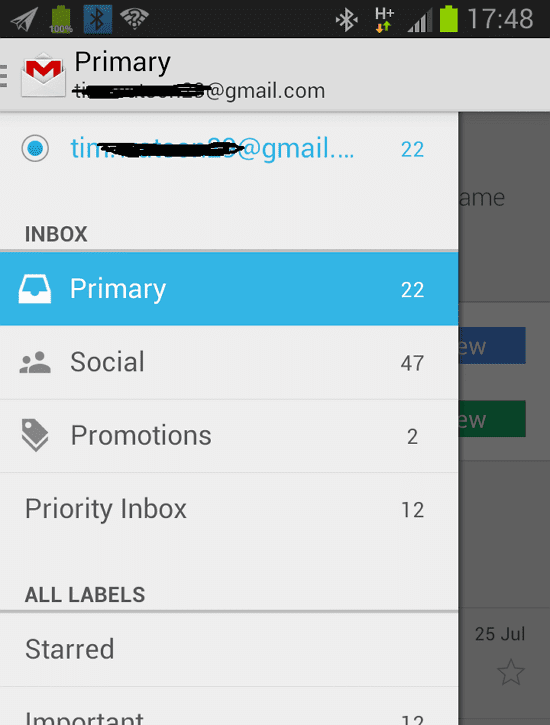 Should an Ad be targeted this is how it appears

The Ads look and behave like emails; they have subject lines, can be opened, clicked and forwarded. It’s as if Google have ‘sent’ a paid for promotion on behalf of the advertiser to the Gmail user. It’s a big vote by Google for the power of the mighty email.

If users don’t go to the promotions tab then Google won’t get revenue from their Ads and thus Google will change the interface again. Right now Google has a strong incentive to ensure users do review their promotions tab.

What impact will this have?

The real question is not about how inbox functionality has changed but rather will it alter the way that users perceive, think and interact with email?

Why is Google doing this?

Officially Google are doing this to help Gmail users saying that it “puts you back in control” of your email.

However, it’s no secret Google makes its money from advertising. The fact is Google is clearly making changes to improve the revenue stream it gets from Gmail users. Ads have long been present in the webmail interface in a column down the right side. Google is likely concerned these are too easily ignore and is making it much harder for users to avoid scanning their Ads.

In fact, this is a big acknowledgement from Google about the power of email and the huge revenues email marketers are driving from their lists. Google is clearly looking at the revenue and working out how they can piggy back off of the success of email marketing.

What should I check?

Check your database to see how many Gmail users you have. If you are strongly B2B its likely to be small and the change will have minimal material impact.

MailChimp ran analysis last week to see if this change has impacted open rates and the first signs are there is a small impact, a drop of 1% from 13% to 12% on open rates.

Open rates provide a view of campaign impact. However, open rates are not a strong indicator of commercial success and don’t map to conversion at all accurately. To really understand if your activity has been impacted check your conversion and revenue metrics, look at whether the revenue per Gmail subscriber per month changes.

If you can’t check your revenue then check your click rate. Some email platforms provide a report out of the box to segment campaign performance by domain, here’s an example from Emailvision:

The rollout has been happening in June, so look at trend changes in the three months before June and compare against August onwards.

What action should I take?

Some brands have pushed out an email segmented to Gmail customers with advice on how to get their emails placed in the Primary tab rather than the Promotions tab.

This example spotted by Alchemy Worx from the Outnet. 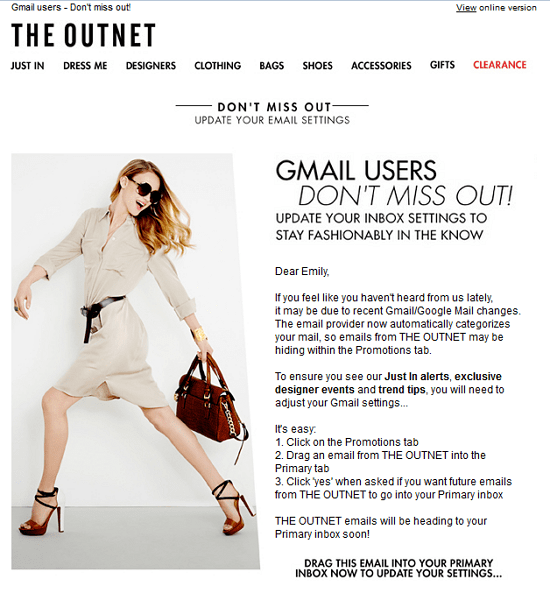 In short ask customers to do one of:

*Default behaviour for starred emails is to go to the Primary tab. However this can be controlled by the tab settings dialog that looks like this 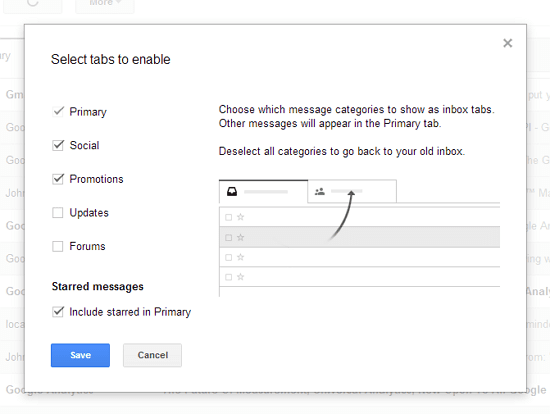 One brand marketer reported they had a 21% read rate from such a message, which they were happy with.

A flash sale might be used to drive customers to move your messages to the Primary tab. Using loss aversion, a pre-flash sale warning message could be combined with a message advising customers how to get your emails into the primary tab, otherwise they may miss the start of the sale.

What about the future?

The truth is that right now we don’t know for sure what the final impact will be. When Google added the priority inbox there was a mass of concern and gloom. After the dust settled there weren’t reports that it had made a material difference to email effectiveness.

This isn’t the first and neither will it be the last change to way the inbox works.

Email sits at the core of the online world, everyone person online has an email address and checks their inbox. There are no signs that this is going to change, the need for personal electronic messaging remains and should Google stop the inbox working in the way customers want it to work then they will leave and use a different inbox solution.

For commercial email to stop working requires customers to stop wanting commercial email. Technology can’t change customer desire for offers, deals, information and all the other reasons they sign-up in the first place.

The basics of email marketing are truer than ever. Get opt-in permission and provide email content that on balance is of sufficient value to you customer that you remain wanted and welcome in the inbox on a regular basis.

New December 2013 research on the impact of Gmail's tabbed inbox

This new research from Return Path is based on a decent sample - they analyzed data from its panel of email users—approximately 3 million people who agree to anonymously share their aggregated inbox experience. This includes 400,000 distinct Gmail inbox configurations. 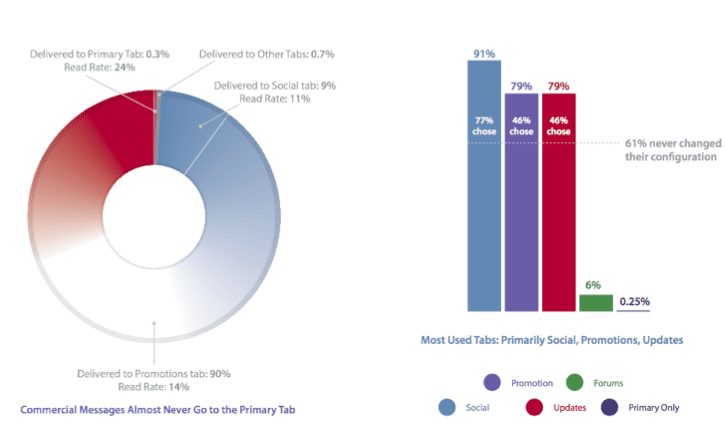 The main findings of the research relevant to email marketers are that:

Mailchimp also has a detailed analysis on the impact of Gmail's tabbed inbox on opens . It shows the percentage changes in opens are significant when compared to other email services included for comparison.

Tim is founder of email marketing consultancy Zettasphere and EOS Implementer at Traction Six. Experience includes Operations Director at Email Reaction and Marketing Director (fractional) in the US delivering a 310% revenue increase to $5m. Tim has 15 years of email marketing expertise with a heavily analytical approach to strategic choices. Connect with Tim via LinkedIn or Twitter.

Practical ideas you can test today and start boosting your email CTR (click-through rate) and get more from your email campaigns Leads are the lifeblood of every digital business, and email marketing is a proven method to get leads and …..