What do people really do when they get a marketing email?

We congratulate ourselves when we go "beyond the click" and measure conversions, revenues and profits. And we're understandably excited about new metrics like read and print rates.

All these numbers have important roles to play. But their availability seduces us into forgetting they do not capture all the important responses to email.

The UK DMA, fast.MAP and Alchemy Worx just released the 2012 Email Tracking Study, which looks at the self-reported inbox and social habits of just over 1,000 UK consumers.

"In this post I share some survey data and explore the implications of email marketing “beyond the open”...showing how consumers really respond to emails from a brand.

First, though, here's the related infographic from the study which we thought would be good to share here, too. One of the most interesting insights is that 49% of respondents subscribe to just 1-10 brand emails.

The branding impact of marketing emails?

Here's what people say about their response to an interesting (marketing) email: 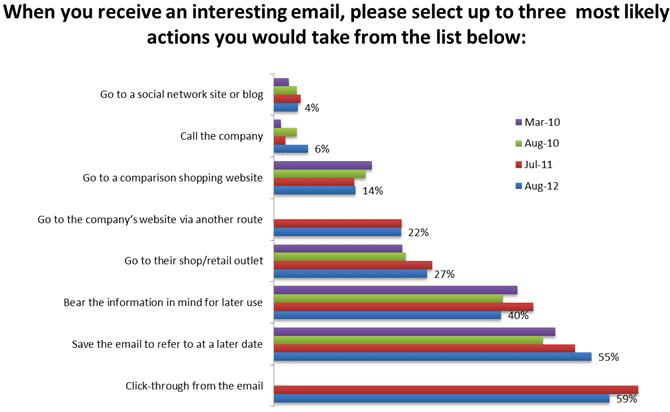 The chart demonstrates the impact of delayed action and indirect action, both of which are often ignored by marketers. Two problems associated with this are:

1. The big missed opportunity to optimise for other responses.
2. Underestimation of the true impact of email.

If you look at opens, the majority tend to occur fairly quickly. MailerMailer, for example, found an average 77% of all opens occur within 24 hours of sending out a campaign.

Accordingly, many campaigns are judged on a day or two of responses. Yet 55% of consumers in the survey say they would save the email to refer to at a later date.

Later opens and clicks are likely to be higher quality. There are fewer of them, but many retailers find they lead to higher conversion rates. In other words, the distribution of revenue through time won't be as skewed to the first 24-48 hours as you'd expect from opens and clicks alone.

One conclusion is to measure campaign results over a longer time period. "Saved emails" also mean sender names and subject lines get repeat viewings through time, emphasising the role of both in generating repeat brand impressions.

There's also a need to keep campaigns "active" for longer. If people return to an email some time later, do the links, images and landing pages still work? If coupons or offers have expired, is that communicated and are alternatives presented?

Traditional email marketing metrics would not measure sales, downloads or other events from the 27% of consumers that might "visit the shop or retail outlet" or the 22% that would "go to the company's website via another route".

This also relates to the nudge effect, where the sender and subject lines influence purchase decisions, even when the email remains unopened.

Given these strong indirect responses, how do you now define an "inactive" subscriber? A lack of measurable opens or clicks clearly does not always imply the email is driving no response.

And how might you design email campaigns to optimise these positive, indirect responses?

Equally, not every indirect response is a desirable one: 14% of those surveyed suggest they might visit a comparison shopping engine. So your email could drive a sale for a competitor!

We know that emails can trigger relevant searches which, again, might produce sales for you sourced through Google, drive folk to competitors or even cost PPC money.

The better your understanding of the these broader, true impacts of marketing email, the better your decisions on investment, strategy and tactics.

But how do you get a grip on those true impacts? Possibilities are:

Author's note and disclaimer. Thanks to the UK's DMA for giving permission to excerpt the 2012 Email Tracking Study, for which I wrote the commentary on the survey results.

Mark Brownlow is a former email copywriter and publisher of the retired Email Marketing Reports site. He now works as a lecturer and writer. Connect with him via Lost Opinions.

Recapture the attention – and transactions – of your e-commerce cart abandoners with effective email marketing sequences Every hour of every day thousands of e-commerce website visitors add items to their shopping carts, then quietly leave without purchasing anything. Even …..