When is the best time of day to send an email?

Sending emails at the right time to reach your subscribers when they are actively using their email will affect overall campaign response. Given the ongoing interest in this topic I've updated this post based on some of latest research from Pure360 where they looked at emails from 40,000 different campaign the last year from 150 of their clients (900 million email delivered). As you would expect the best time varies by sector, but they do recommend a best time for consumer emails:

'In fact, the best time to send an email is now during the ‘Post Work Peak’, as people are finishing up at work and heading home. Over a quarter (26%) of marketing emails that are sent in the most successful hour, 5pm to 6pm, are opened, which is 9% above average. '

Optimal time to send your email by sector

Here is their insight about the best time to send emails, showing variances by sector. You can read more about the methodology in their report. 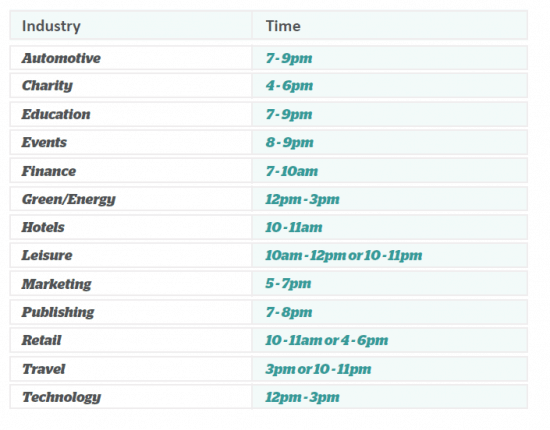 There is also an infographic giving more insight on email timing. 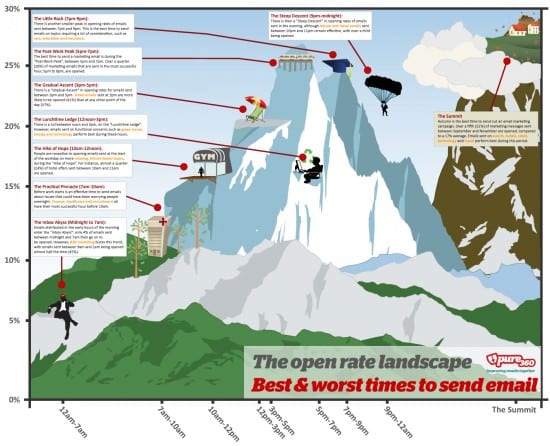 Emails distributed in the early hours of the morning enter the 'Inbox Abyss'. Only 4% of emails sent between midnight and 7am then go on to be opened. B2B marketing bucks this trend, with emails sent between 1am and 2am being opened almost half the time (45%).

Before work starts is an effective time to send emails about issues that could have been worrying people overnight. Finance and Healthcare, for instance, both have their most successful hour in the 'Practical Pinnacle' before 10am.

Recruitment emails are most likely to be opened if they are sent as people prepare for the day ahead: a third (33%) of those distributed between 6am and 7am are opened compared to 17% on average.

People are receptive to opening emails sent at the start of the workday on more relaxing, leisure-based topics, during the 'Hike of Hope'. Almost a quarter (24%) of hotel offers sent between 10am and 11am are opened.

There is a lull between noon and 3pm, on the 'Lunchtime Ledge'. However, emails sent on functional concerns such as green issues, energy and technology perform best during these hours.

There is a 'Gradual Ascent' in opening rates for emails sent between 3pm and 5pm. Travel emails sent at 3pm are more likely to be opened than at any other point of the day (41%).

The best time to send a marketing email is during the 'Post-Work Peak', between 5pm and 7pm. Over a quarter (26%) of marketing emails that are sent in the most successful hour, 5pm to 6pm, are opened. That’s 9% more than on average.

There is another smaller peak in opening rates of emails sent between 7pm and 9pm. This is the best time to send emails on topics requiring a lot of consideration, such as cars, education and insurance.

There is then a 'Steep Descent' in opening rates of emails sent in the evening, although leisure and travel emails sent between 10pm and 11pm remain effective, with over a third being opened.

The next example is one from SmartFocus Digital (now Emailvision) - interesting since it gives quite a different result to the B2C focused results above. The results speak for themselves - AM is definitely superior than PM for this B2B audience. We can speculate that if you broadcast AM you have an opportunity to reach the audience late morning, over lunch and into the afternoon.

Has anyone completed any B2C tests which shows similar? 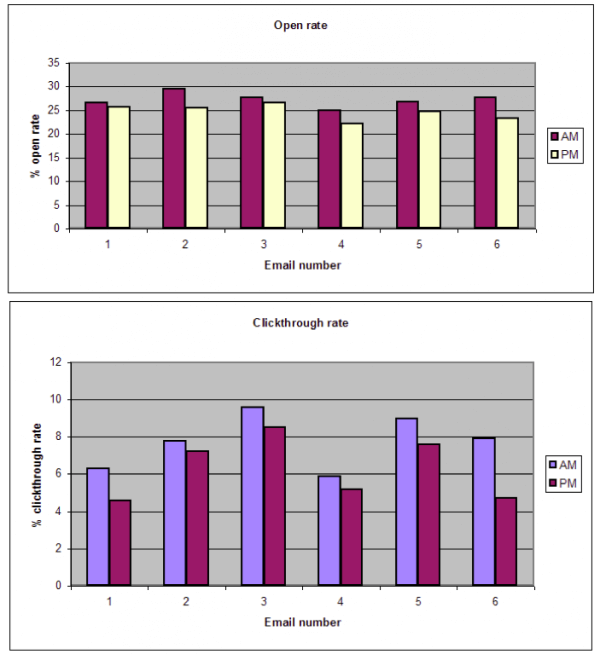 "The AM vs PM send test ran over six issues of Gauge. Recipients were split into A and B halves, each getting the same newsletter but one half at around 10.30am and the other half at around 3.30pm.

We chose the times to avoid the first thing in the morning inbox deluge and the post-lunch email backlog and delivered both emails at times when we believed recipients stood a reasonable chance of engaging with the content.

The key to a successful A/B test is only changing one thing so each issue was always sent out on a Tuesday to avoid any variable caused by different days of the week.

The results showed that not only do more people open the newsletter when it's sent in morning (up 10% more than a PM send), but of those who do open more of them click on the links in the newsletter. There was an average 23% better click through rate on the AM send".

I've been in touch with Tim while writing this post. He said he wouldn't be surprised if the situation has changed now, since with more mobile use email reading patterns have changed. He went onto say that he recently ran a structured test plan across days and times for a client and found that time of day was not so important for their emails but the day of week email sent can be more significant.

This third test gives a different type of insight. It shows how to run an email test with different broadcast times to review the response. The first deployment at 4AM is clearly ineffectual since most subscribers will be asleep and when they come into work or log-on at home will be working on other activities at 8AM. The 10AM deployment is most effective.

A really sophisticated approach to determining the best time of day is to personalise!  Retailer eBags individually calculated the best time to send the email by looking at the behaviour of each user within the email list, recording the exact time when they signed up to the list. A test they ran found using this broadcast time found that...

Overall, these tests show that hitting the sweet spot for email broadcast time does still matter. Once you have tested to find the best timing for your audience, it's good practice to keep the time of day consistent, particularly for enewsletters, since then there will be an expectation from enthusiastic, regular readers.