Deloitte unaware of Facebook, Google in research on impact of different media?

Consumer research on use and perception of TV and other media

Recommended research: On TV: perspectives on television in words and numbers - Deloitte/YouGov 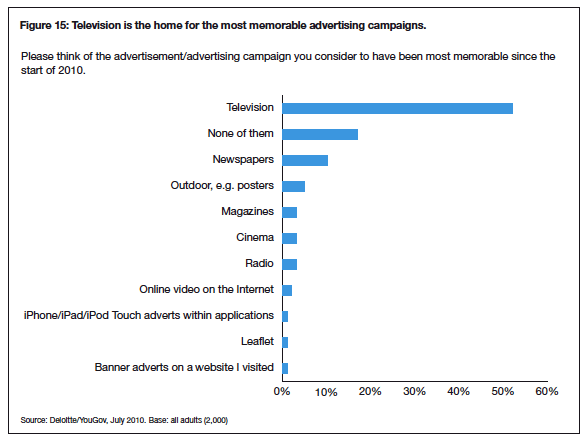 Our commentary: This research has been widely reported in the UK newspapers and online with print journalists using it to knock the Internet - always a favourite. It's staggering that they don't mention that the research was commissioned for presentation at the recent Edinburgh TV Festival... I wonder why?

It's a classic example of developing a methodology to make the statistics fit the story you want to tell. In its press release Deloitte state that "Online advertising struggles to make an impression" and that "television advertising still packs the greatest punch" and elsewhere "Advertising on television, still the nation"€™s favourite format".

FWIW Here's some of the major flaws in the methodology and reporting in my view:

Marketing implications: Always check the methodology and sample for reported statistics. But remember that digital media still only accounts for 20% of all media, so offline media have their role. Integration is still the name of the game.

Tools and templates for your next campaign

What are the essential parts of a campaign plan template? The purpose of a marketing campaign plan is to identify relevant, integrated, marketing activities and channels to reach campaign objectives as well as influence customers. An effective campaign plan has …..