Hunter [Plays Football With] A Bear

Two months ago correction fluid/tape brand Tippex launched their hit YouTube campaign, "NSFW. A hunter shoots a bear!," featuring a reluctant hunter faced with shooting a bear wandering up to his tent. 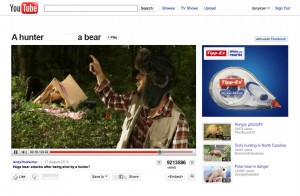 The hunter decides he cannot shoot the bear - instead reaching outside the frame of the video - a cool rich-media tactic - and using the big Tippex dispenser in the ad alongside him to erase "shoots" from the video's YouTube title.

As with the Burger King's classic Subservient Chicken campaign it's up to you to insert the verb. "Erase" seems the most appropriate, given the product!

The result? More than 6.3 million viewers in its first few weeks, why so successful...

The learning maybe is that a creative but simple idea well executed with rich technical solution can create massive cut-through and be extremely relevant to your brand all at the same time. The time, effort and investment ends up being way cheaper than more traditional paid media given the years that the video can be played with. The best thing since Old Spice guy - probably?

Develop the skills to deliver growth during inflation with Business Membership