Without a clear, impactful and differentiated concept, there is substantially less chance a campaign will pierce through the noise and generate the desired attention from the target audience. That's why you need a big idea.

The creative element of any campaign is by far one of the most enjoyable. However, the process of coming up with a big idea can also be a little daunting, especially with so much at stake. Whether agency or client-side there will be many interested stakeholders involved, each with an opinion or point of view. So, in this post, we’re going to look at some of the key steps in the development of a big idea to help provide some structured thinking around the process.

Any new campaign will need a hook or theme that you’ll want people to recall, share and act upon. A campaign’s big idea is the overarching message that underpins all elements of a campaign in order to resonate with the target audience. The big idea will need to be rooted in a piercing insight and linked to the campaign’s objectives to ensure it has maximum impact and relevance.

The big idea should be an overarching concept that can stretch across all media so that it’s not just limited to one channel, for example, TV or radio. In this context the big idea can sometimes be referred to interchangeably with the term ‘experience idea’ because it marks the transition from strategy to execution:

The goal is to develop an idea that is joined up and integrated with all other relevant channels, rather than a series of separate executions that have a tenuous relationship with one another. This approach will put you in a stronger position to engage consumers meaningfully in the places that matter.

In order to illustrate the development of a campaign big idea, I’d like to use a real-life case study from belVita to demonstrate each of the key steps.

To provide some context, belVita, owned by Mondelez International, were looking to bring their breakfast biscuit to market in the US at a time when there were many established direct competitors offering similar products. belVita knew that launching in such a competitive environment would be tough and therefore needed a big idea that could help them stand out from the crowd. 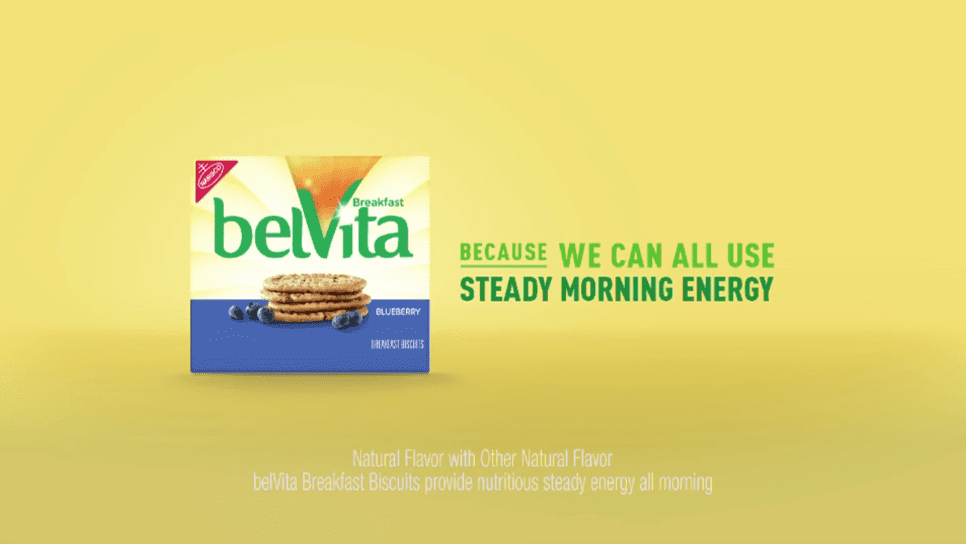 1. Start with a clear brief/ challenge

The big idea starts with the definition of the challenge and the creation of a clear brief for everyone involved. If you’re working with an agency, or group of agencies, then the brief is a critical step as it will help ensure that there is clarity around what you’re looking to achieve.

belVita’s challenge was to create significant brand awareness, engagement and trial in a crowded marketplace and therefore the brief was most likely to come up with a differentiated big idea that ran counter to every other brand was talking about, i.e. that the morning was something to survive and get through.

During the briefing stage there are two key areas of focus:

belVita defined their audience as ‘morning optimists’, a group of people who were positive, ambitious but also constantly busy with very hectic lifestyles.

The next task is to uncover a piece of sharp, compelling insight that encapsulates a real truth and problem to solve for the consumer. This is usually achieved through extensive research in relation to both the target audience and the overall product/ service category related to the campaign.

In belVita’s case they discovered that $1bn was spent every year to advertise the benefits of breakfast foods and therefore consumers were being bombarded with very similar messages. Whilst most brands talked about mornings as a problem, belVita’s own research revealed that consumers felt breakfast was very important because they wanted to accomplish a bigger goal in the morning. In other words, the morning was not a problem to be overcome but a fresh opportunity to accomplish things.

The insight discovered in the previous stage enables a brand to start brainstorming ideas and solutions to challenge the consumer problem or need.

With the knowledge that many consumers want to start the morning positively and seize the day, belVita started moving towards the idea that their breakfast biscuits give people the energy to fuel a series of victories throughout the morning. This strategic idea, combined with their insight, led to the creation of a new kind of morning campaign for a new kind of morning brand.

4. Articulate the idea clearly and succinctly

The test of how well a big idea will resonate and translate across channels is whether the connection between the insight and brand connection and the proposed execution can be distilled clearly and succinctly on one page: 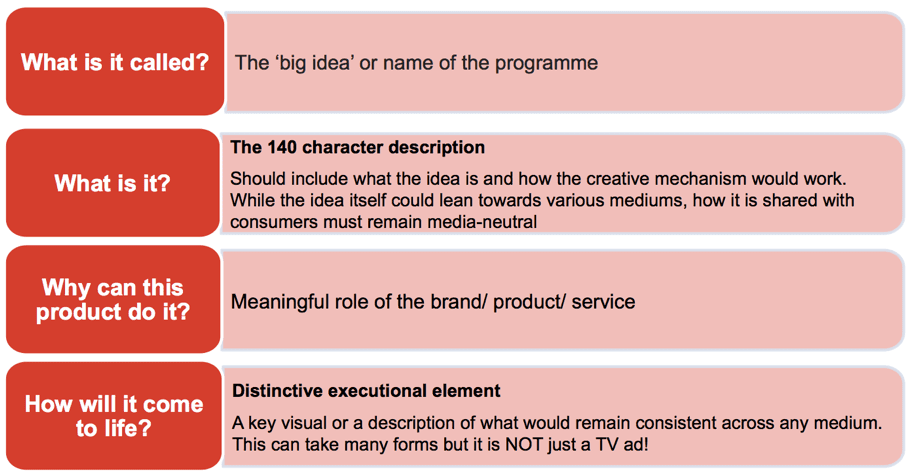 Ask yourself whether the idea would make sense if shared on Twitter with friends. If not, it’s possible the idea is not distinct or memorable and therefore unlikely to have the power to make an impact.

belVita’s ultimate big idea was to celebrate real morning wins with the creation of a new, fresh communications approach that would embed their message into the mornings of real people: 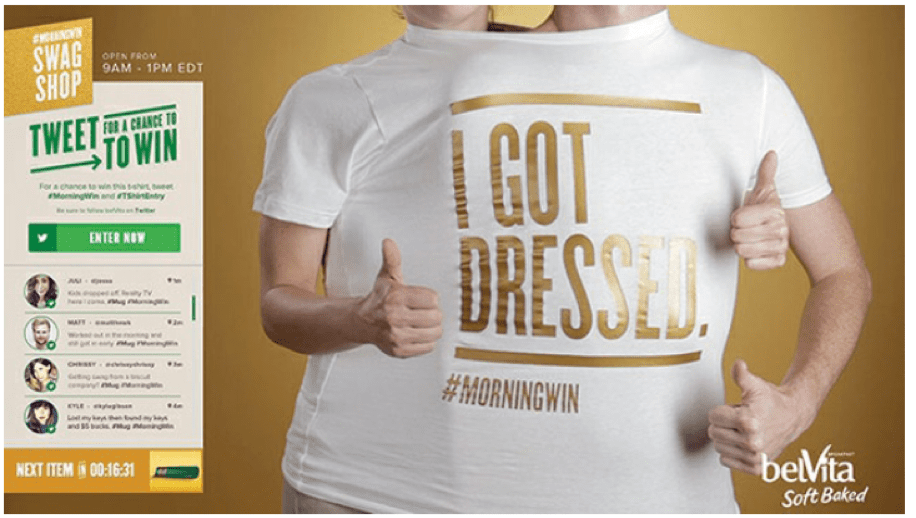 If we take the framework above and apply this to the belVita case study it might look something like this: 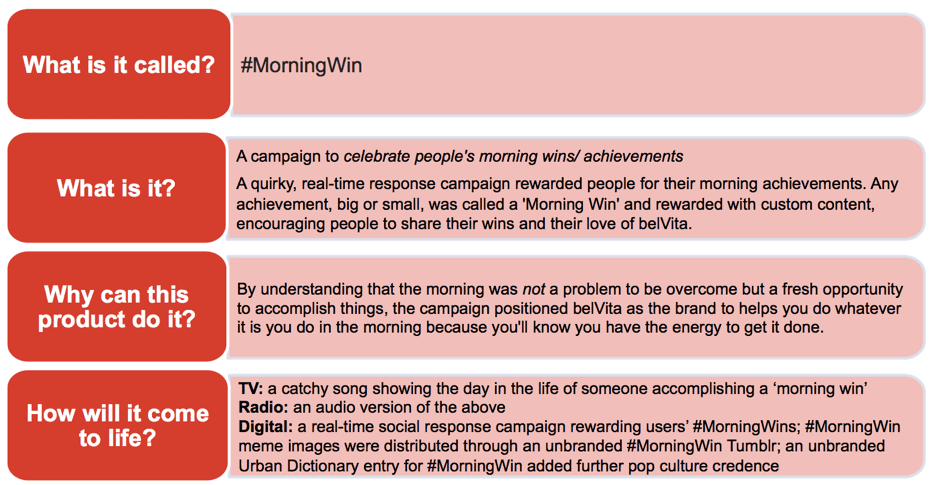 With a strong, single-minded big idea in place, belVita moved to execution, setting an ambitious target to ‘own the morning’. To drive cultural relevance of #MorningWin and amplify the campaign through culture, the brand created linked content across a range of channels, including TV, digital, radio and social, as well as leveraging morning radio shows, Tumblr and Buzzfeed to showcase unbranded content related to the campaign’s theme.

The strength of the big idea meant the creative could stretch naturally across multiple formats, including a real-time social response campaign featuring both digital and physical rewards for user-generated #MorningWins: 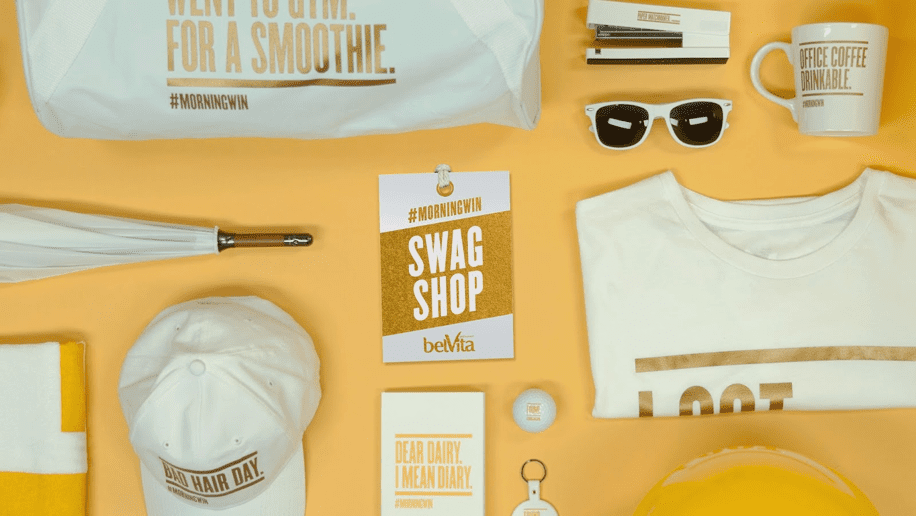 The creation of a ‘big idea’ is not a straightforward task and involves multiple stages and stakeholders. Whether you’re creating an idea internally or in partnership with an agency it takes discipline and a clear focus on the campaign’s brief and objectives.

However, the development of an effective big idea enables a brand to develop a campaign with a clear creative focus with a joined upset of executions that are much more likely to have an impact and resonate with the target audience.

Do you think your business is good at writing briefs? Your agency likely disagrees… Research from Smart Insights exploring best practices for marketing planning has often reviewed the importance of annual marketing planning and how to structure marketing and digital …..