Twitter announced yesterday that they're introducing a new 'share' button for mobile users. In short, this will allow users to sent tweets to friends, colleagues, and contacts via direct message, email, and text and will allow them to 'bookmark' tweets they want to read later.

Today we are rolling out a new ‘share’ icon that allows you to:

Users responded to the official Tweet by Twitter by stating they would rather have an 'edit' button. Twitter is still to release an 'edit' button, but not everyone agrees this would be a wise choice and would kill Twitter's USP.

A practical guide to Managing Twitter to build awareness and drive sales.

The new share button means possibly a higher organic reach. It makes content easier to share with friends and colleagues, so creating social content that is engaging and shareable is vital. We tried this out on each other, and we must admit, it's a simple process so we can see many Twitter users really taking advantage of this new feature.

The new share button is only available on mobile, for now, and is next to the like and retweet icons under tweets:

I could then share tweets via direct message, text, email or add to my bookmarks. When sending via text and direct message, it embeds the tweet into the message which means the recipient can easily click on it and be taken to the Twitter app to view the native tweet. However, it also shows the full tweet (including link) in text mode, which means users don't need to even go on Twitter to view the whole tweet that has been sent to them. 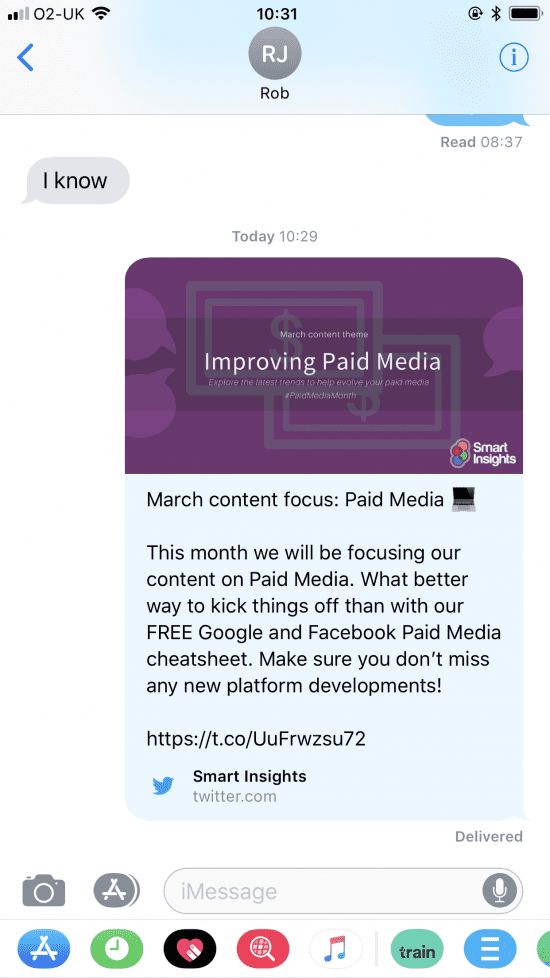 Tweets you bookmark can be viewed by clicking on 'bookmarks' on your left side navigation. Users are happy because this will mean they can bookmark tweets to view later, rather than liking them where they're visible to the public.

What do you think of this new feature? Let us know by tweeting us at @smartinsights