5 secrets from top brands to inspire your Twitter Marketing Strategy

Twitter remains one of the most popular social media platforms and it’s recognized by brands as a way to facilitate customer and user engagement. But, with over 350,000 tweets posted per minute, achieving brand visibility is a challenge.

Success is not just about how many followers you have, it’s about engagement with users, building strong relationships.

Twitter allows you to reach a larger audience and increase brand awareness. But there are challenges to overcome such as exposing your brand to negative comments, dealing with customer complaints, and remaining visible.

Using Interbrand as a reference, we chose 18 successful global brands from 9 industries. For a different perspective, we included two well-known CEOs, both with a big presence on Twitter. 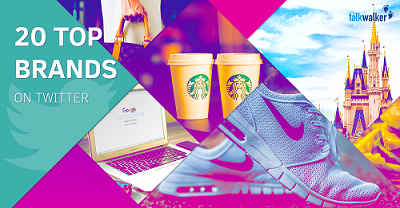 For the period of 2016, we mined data from each brand. We took stats for hashtag usage, tweet engagement, how brand ambassadors and influencers were used, and engagement with followers.

Based on this data, we’ve highlighted the top 5 Twitter tips that we think are key to building a successful Twitter marketing strategy. If you want to dive straight in and find more, you can download the full report of all 20 brands and learn all the secrets.

Twitter Tip #1: Find the voice of your brand and have the confidence to speak your mind

Don’t be Shy – Speak Your Mind

You’ll need the strength of your own convictions, facts to back up your comments, honesty and passion. Sharing your thoughts, even if controversial, shows the human side of your brand – robots rarely express their feelings.

Our hearts are with the Orlando victims, their families and the LGBT community. #LoveIsLove pic.twitter.com/vMPzfWa6Y7

Google’s Twitter feed is hardly a selling platform. Occasionally it tweets about product development but primarily it’s a collection of everything it considers important. Whether it’s a worthy cause, political issues, amusing anecdotes, or something poignant. The tweet above was retweeted 10,032 times and liked by 17,715. Comments weren’t all positive, but Google stood up for what it believes in and received engagement of 27.7K.

Google is confident enough to openly support the causes it values, popular or otherwise. Its convictions are strong and it speaks its mind, negative comments merely increasing engagement.

Twitter Tip #2: It’s not a playground - rise above negative comments to defend your brand

Negative comments – Be a Grown Up

There will be negative comments; how you deal with them is your choice. Here’re two different strategies, both effective.

Donald Trump posted a derogatory comment on Twitter about The New York Times. What did it do? It didn’t ignore it, it didn’t get angry. It defended its reputation, it protected its brand.

At the time of publishing our report, the above tweet had been retweeted 2,645 times and liked by 5,422. It’s still very much alive on Twitter and it’s now been retweeted 35,369 and liked 128,270 times. The New York Times uses @NYTimesComm to respond to tweets but rarely engages. In this instance, protecting its brand was primary.

Like many big-name brands, Siemens gets its fair share of negative press. Rather than facing it head on, like The New York Times, it tweets positive and promotional news from its main account and from @Siemens_press and @SiemensMobility; regularly using positive hashtags like #CO2neutral # CleanEnergy #EnergyEfficient.

Whilst celebrities and sports people feature heavily as brand ambassadors, Pampers uses a large community of reviewers and bloggers who test products, share opinions, advice and promotions. It’s real people sharing real life stories, providing genuine reviews and positive user generated content, which Pampers always retweets. The tweet below had only 153 retweets but it was shared throughout the community of reviewers and bloggers, plus it linked to a website with other offers from Pampers.

Louis Vuitton’s Twitter marketing strategy is one-way, no engagement, with its focus on pushing its products. It only retweeted 5 times in 2016, all from its other Twitter accounts. Yet it has nearly 6m followers, who retweeted the brand’s tweets over 378K times. It’s not a strategy that would work for all brands, but it works for luxury brands that users aspire to.

this choker trend is wild y'all i wore a shoelace to the bars last night & i've never gotten so many compliments thanks @Nike just do it lol pic.twitter.com/K49fJmAXNe

A member of the public wore a shoelace as a necklace and tweeted a pic, it went viral. Engagement was at 310K and the story was picked up by the press. Whilst not directly promoting Nike, it brought huge interest @Nike. Strangely, Nike did not engage with the tweet.

Back to the Future is a movie with a cult-like fan base. When it was released almost 30 years ago, Nike created a responsive shoe – the self-lacing sneaker or Nike Mag – worn in the movie by Michael J Fox. In 2016 Nike, never slow to jump on a trend, released the 2016 Nike Mag. A limited-edition, only 89 were produced. The sneakers were put into an auction with proceeds going to The Michael J Fox Foundation for Parkinson’s Research. Nike followed a trend whilst demonstrating its social conscience.

Twitter Tip #5: Whether you’re controversial or caring – keep it interesting and make us happy

Keep it Human, Keep it Social – Be Approachable

Interacting with people who mention your brand on Twitter is important. Brands that ask questions, use humour, can laugh at themselves, and personalize their tweets – are seen to be more approachable, more human. It takes time and effort but followers do appreciate it, and you’ll increase engagement and brand awareness.

Richard Branson shares his thoughts, ideas, politics, charities, jokes, book recommendations, family stories; his products and services are almost an afterthought. He has over 9 million followers but tweets as if it’s just to YOU.

Procrastination is the thief of time: too many great ideas fall flat due to lengthy decision making: https://t.co/7gAoxDhfey pic.twitter.com/UiDtoo4ekF

We support #PrideWeek @Siemens because respecting each other is what matters to us #diversity @SiemensCareers pic.twitter.com/WVGvV6LLIG

Don’t wait for a disaster on Twitter before reacting, use it just for selling your product, or jump in purely for customer service issues. Twitter can bring character to your brand, a personality. Used well, it’ll be your brand’s human voice.

To learn more about how these brands and more have found a voice that rocks Twitter, download the full TalkWalker report – Top 20 Brands On Twitter – Playing Their Cards Right In 2016

Thanks to Meg for sharing their advice and opinions in this post. Meg Carpenter is a copywriter in the marketing and communications team at Talkwalker, a social media analytics and monitoring platform.You can connect with her on LinkedIn.