Switching up social: Is Lush really a brave pioneer?

By Expert commentator 23 May, 2019
Essential

Lush UK has ditched social media to put social back into the hands of its communities but is this a brave move, misguided or something else entirely?

Social media has become such a huge part of our daily lives, as well as an important aspect of marketing. From keeping up with friends and family and growing your audience to becoming an influencer and increasing brand awareness, social media is a powerful tool.

It’s no wonder then that social media users across the globe increased 9% year-on-year, with 3.484 billion people using social networks in 2019. This has led to more brands increasing their use of social media to reach greater audiences and networks have responded to this with tools like shoppable posts.

With social adapting to demand and digital marketing strategies attempting to keep pace, the news that cosmetic company Lush was ditching social media platforms came as a bit of a shock. Lush, a company that has never engaged in paid media as part of its marketing, announced in April that it was saying goodbye to its social media accounts so as to talk directly its customers via live chat on its own platforms.

In an age where social media is a queen among marketing tools, I can’t help but wonder whether this is a smart decision, if the company may come to regret the choice or if there is more to the move than initially meets the eye.

Before Lush shut down its social channels, its Instagram boasted 569,000 followers, its UK Facebook page has 423,143 and 202,000 people followed the brand on Twitter. Beyond its Lush UK accounts across the three social platforms, the company also had accounts for Lush Kitchen, Lush Life, Lush Times, Gorilla and Soapbox, leading to a great level of social penetration. 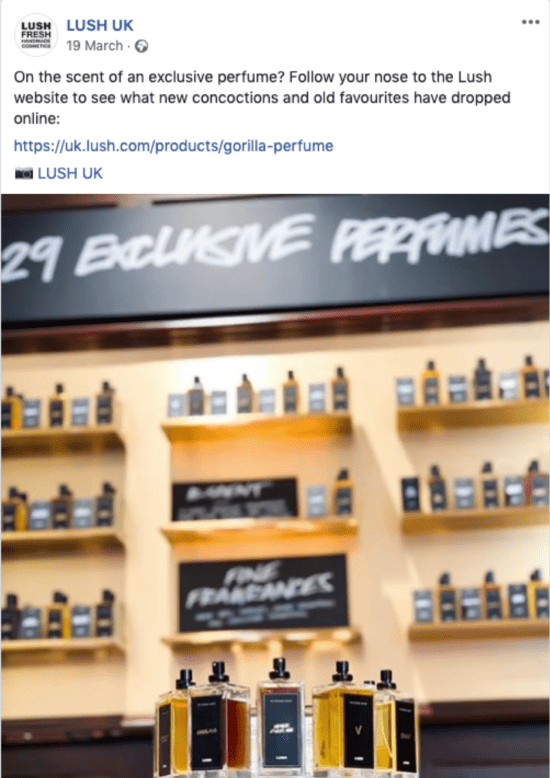 In fact, since social media started growing in popularity, Lush jumped into it with both feet. From its previous Lush Forum, which allowed members to discuss products and enjoy online parties and exclusive products, to its accounts for its separate brands, social media has been a huge part of the company’s marketing strategy.

The reason for Lush’s involvement – and you might say reliance – on social media was the fact that the company doesn’t engage in traditional forms of advertisement. You won’t see the brand on TV or included in magazine ads and you won’t hear any catchy Lush jingles on the radio. It has never paid for adverts or exposure, preferring to rely on word-of-mouth marketing, hence the strong reliance on social media.

It has developed an effective social media strategy, incorporating strong images, engaging videos, interesting articles, attractive products and a personal touch – right down to each employee answering questions and queries on its platforms signing off with their name. Scrolling through its now-defunct social media accounts, you won’t find copy/pasted responses or a robotic tone, everything about the Lush social media experience seems real and embodies the knowledgeable and caring (if slightly over-zealous at times) approach that you find in stores.

In fact, the only other form of online promotion outside of the company’s social accounts and website is the huge number of blogs that people have written about its products and the free coverage in the press when certain products have received rave reviews. The amount of content created about Lush goes to show that this approach worked, so why cut off part of it?

On April 8th, Lush announced that it was taking the conversation off of social media platforms. In a message posted across its accounts it said:

“Increasingly, social media is making it harder and harder for us to talk to each other directly. We are tired of fighting with algorithms, and we do not want to pay to appear in your newsfeed. So we’ve decided it’s time to bid farewell to some of our social channels and open up the conversation between you and us instead.

“Lush has always been made up of many voices, and it’s time for all of them to be heard. We don’t want to limit ourselves to holding conversations in one place, we want social to be placed back in the hands of our communities – from our founders to our friends.

“We’re a community and we always have been. We believe we can make more noise using all of our voices across the globe because when we do we drive change, challenge norms and create a cosmetic revolution. We want social to be more about passions and less about likes.” 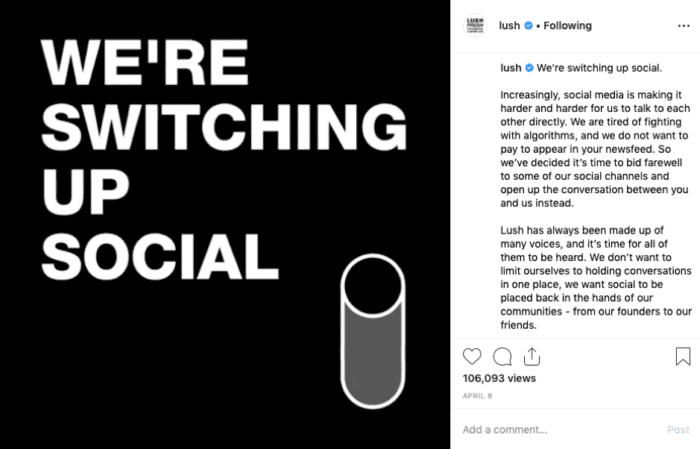 While its profiles are still available across social media, nothing new has been posted on them and they are no longer monitored. Instead, people can head to the website for updates and the live chat function.

Lush is also going to be using “Lush Personalities” online, showing that the brand has realized how effective influencer marketing can be. These personalities aren’t being treated as a replacement for the company’s social accounts, instead, they are being used to support Lush’s mission of connecting on a more personal level.

According to Lush, this decision is all about “cutting out the middleman” between the brand and the customer community. People who work within Lush will now serve as conduits for conversations about the brand and its products, supporting the idea of social being about passions rather than likes.

Removing a connection to connect

While the idea of trying to connect with people on a personal level is a noble one, as well as being fairly refreshing, is removing a channel for conversation and connection really going to achieve this?

As previously mentioned, the way in which Lush responded to posts, messages and comments on its social media profiles embodied the personal touch that you’ll find in its stores. You got the impression that the people answering really wanted to help, which helped you connect with the brand on a more personal level.

On top of this, its profiles were often the place where fans of the brand would discuss products, seek advice from other members of the community and connect with each other no matter where they were based. While it’s likely that some of these conversations will still happen online, has Lush effectively shot itself in the foot by removing the central places people flocked to in order to talk about the brand?

Instead, the cosmetics company is relying on conversations around influencer content or in numerous Facebook beauty groups. While people are likely to continue talking about products and sharing recommendations in these ways, it is unlikely to be enough to replace the void left by the brand’s inactive profiles.

Not as straight forward as it seems

While all of this may seem like Lush has quit social media and that’s that, this isn’t actually the case. It is only the UK profiles run directly from the brand that have been switched off. Lush North America and Lush Australia are still posting on social media platforms while in the UK, the accounts run by individual shops are still very much active.

Although the brand seems to be promoting this idea of putting social back into the hands of the community, the fact that its decision does not encompass every profile run by and associated with itself undermines this.

Part of the decision to have accounts run by different parts of the business all comes back to when Lush first started. After the initial brand created by its founders – Cosmetics To Go – went bust, Lush was formed in a way that provided added protection.

Each part of the company - stores, online, manufacturing and business in other countries – were effectively classed as separate businesses. This meant that if one part of the brand went bust, the while company wouldn’t be lost. While this is a fairly clever way to protect Lush as a whole, it has meant that the segmentation of its social presence makes a total switch off impossible.

But then you have to consider whether this is ultimately part of the plan when it comes to Lush’s social media use. After all, the company can be seen to be taking a stand against the changes social media platforms are making that affect visibility while still maintaining an active presence on those platforms. If this was something Lush felt truly passionate about, could the company not consult with all its various moving parts to coordinate a total social media shut down? 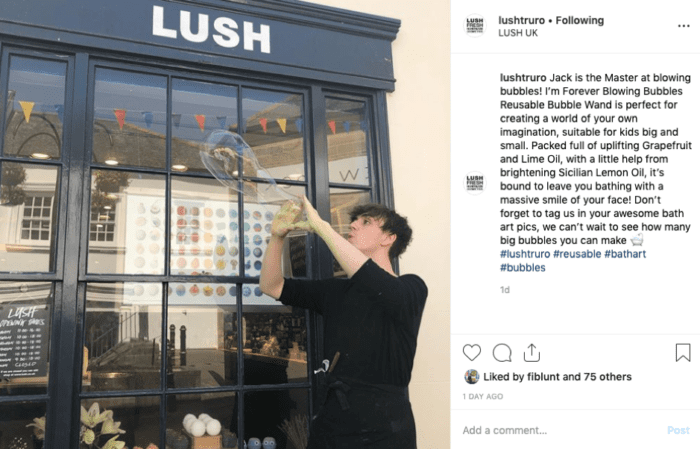 You also need to take into account the fact that stores in the UK are still maintaining their active presence on social media. Even the small Lush shop way down in Truro, Cornwall still has Facebook and Instagram to promote products and events. This suggests that Lush is focusing more on the local side of marketing, which does loosely tie in with its aim of delivering more personal conversations, but still isn’t in-line with the Lush UK social switch-off. Of course, it is also understandable why it might have decided to keep shop profiles live, as the high street is a tough place to be right now and one failing shop will dramatically affect individual employees.

In addition to these points, the fact that its defunct profiles are still searchable and visible, with all previous content accessible for social media users, means that the brand is still benefitting from the platforms. This also gives the impression that perhaps the switch-off isn’t permanent. After all, Lush could easily change its mind, log back in and carry on benefitting from the huge number of followers it has rather than starting from scratch.

While this may be a slightly cynical view, part of me would believe and respect this “bold” move more if Lush really did shut their social media accounts down completely. The mis-matched approach to social media across the brand speaks of a lack of cohesion and suggests that separating itself in such a way has caused breaks in the brand values and mission.

I also have to wonder what has happened to the department that handled all of Lush UK’s social media – have they found places elsewhere in the company or did they end up needing to look for alternative positions?

All in all, the decision is a brave one in a world where social media has such a big impact on brands’ success and consumers’ daily lives, but it isn’t as big a leap as it first seems. Lush is still very much present on social media and could easily step back into its former social media shoes with few issues. At the moment, the whole thing seems more like a trial and it is unlikely that the rest of the brand or other companies will follow suit.

Ultimately, it isn’t going to change the social media landscapes, it isn’t going to impact how platforms run or the algorithms they use, but it may well have an impact on both Lush’s customers and the performance of its UK business.