Advertising options come to Pinterest, a year after it launched 'Buy it Buttons' on Pins to get e-commerce traffic

Brands can now pay to increase the reach of their Pins, or to target a specific audience via Pinterest, much like 'boosting' or promoting a post via Facebook. This move has been some time in the making, as Pinterest launched 'Buyable Pins' back at the end of June 2015. These let users buy products straight from Pinterest, and were seen as a great way for Pinterest to monetize by facilitating e-commerce transactions. Pinterest decided not to take any commission on sales from Buyable Pins, so that prices on Pinterest could be the exact same as on the retailers site. Now that they've built up plenty of e-commerce traffic, Pinterest have taken the logical next step of monetizing the platform via an ad product which will let companies get their Pins seen by larger audiences, helping them build brand awareness and boost sales in the case of 'Buyable Pins'. 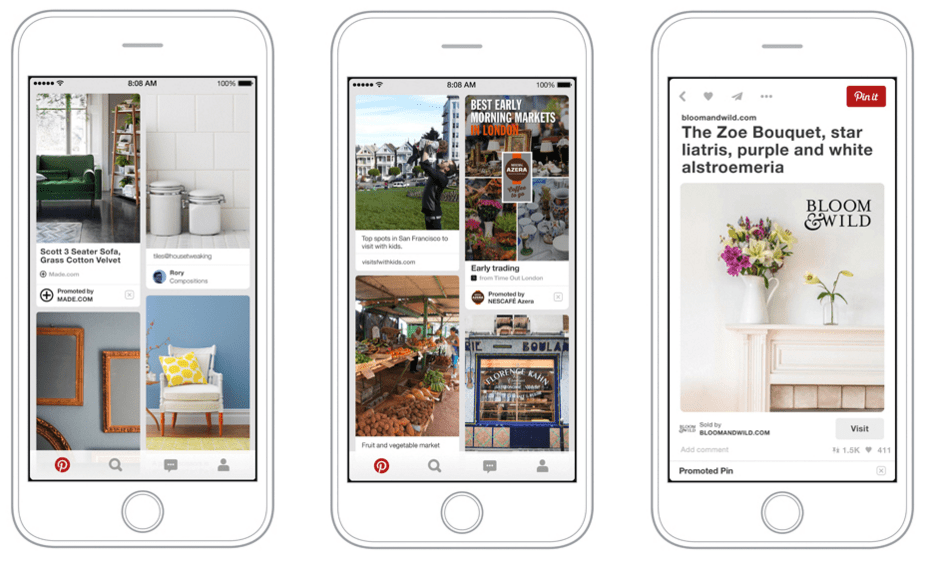 These Paid Pins are essentially a form of native advertising, as they appear in exactly the same way as non-promoted Pins. The only difference is that the paid ones get served to a much larger audience, and you can decide of on the characteristics of the audience you want to target.

Unlike older social networks likes Twitter and Facebook which can be overwhelmed with content leading to low engagement rates, Pins are generally well received by audiences and tend to get much higher engagement rates, depending on the market and the strength of the Pin of course. The ads will be sold on a cost per click or on a cost per engagement basis, allowing marketers to chose depending on what objective best suits their campaign.

Whatever medium you are using to promote your product or brand, you want to know just how effective the ads you're running are, so you can tweak content, alter messaging and assess how effective the overall campaign was. Pinterest offers a conversion pixel to provide data on what people referred to your site from Pinterest ads actually go and do. You can see if traffic from Pinterest is signing up to your mailing list or buying certain products. This could be potentially very valuable. If you are promoting a certain range of products on your e-commerce site, but the majority of traffic from Pinterest hits the site and then buys a totally different product, it may be that there is a demand for that on Pinterest that you simply hadn't realised.

Pinterest doesn't have a user base quite on the same scale as Twitter or Instagram, and is miles behind Facebook, but it does offer something special to advertisers. In certain sectors like fashion or home improvement (which lend themselves to Pinterest's highly visual nature) it sits at a very special point right at the start of the buyer journey. People go to Pinterest to get inspired about how to decorate or what new style to start wearing this summer. If you can connect with customers at that point, you can capture them more easily than when they've already decided on a product offered by a competitor, which you then have to try to lure them away from.

Major brands have realised the value of this. Tesco, John Lewis and B&Q have already signed up as early launch partners, and anyone in the UK can get started with paid Pins today should they want to get involved. If your product isn't something that people come to Pinterest to look for, then Pinterest advertising probably isn't right for you, but if there is a community there interested in your wares, then new paid Pins offer a great way to reach them and boost your revenue.