Tools and tips to bridge and enhance online/offline live events 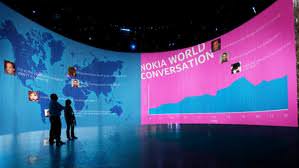 This post by Lisa Harris, Nicole Beale and Graeme Earl reports on the findings of our Social Media in Live Events (SMiLE) action research project.

The project is looking at real and virtual communities interacting around a ‘live’ conference.

Before, during and after the event we monitored a range of social media tools to track how the tools were used by real and virtual delegates. We expected the tools to be used for information recording and sharing, network building and profile raising.

During the event we carried out interviews with conference participants about their experiences and interactions via Twitter, Storify, Flickr, Vimeo, LinkedIn, Facebook, QR codes and Corkboard. We also collected delegate feedback after the event.

You can read more about the data we collected and our initial analysis of it on the LSE Impact Blog.

Countries of the world that the vimeo videos from the CAA2012 have been viewed from.#caasoton #caaworldtakeover flic.kr/p/bGJoj2

The use of social media champions to demonstrate best practice in real time was very successful. For example, our student Digital Champions:

Have u noticed that u can scan the QR code under the posters with your smart phone to get the presenters' email address? #caasoton @caasoton

We were surprised by the scale of social media use during the conference; our archive of the #caasoton hashtag contains more than 13,000 tweets.

We are now exploring ways to add value to this archive through analysis and visualisation tools. We weren’t prepared for the urgent need for us to provide effective summarisation and visualisation in real-time, or at least soon after.

Even experienced social media users almost certainly missed out on the chance to participate in many relevant discussions because they were unaware of them in real time. Whilst we saw delegates pick up topics after the conference, the practical issues of moving on and the swift disappearance of tweets from searches mean opportunities for follow up are inevitably limited.

In terms of visualisations of social media activity, we have identified some core tools that could have been set-up for use prior to the conference. For example;

Post-event feedback revealed delegates who were inexperienced social media users wanted more support during the event.  So, we have incorporated a ‘help desk’ to get people started with twitter at subsequent events, to stop delegates feeling excluded.

It is also important to give a ‘voice’ to people who are not online, to prevent dominant conversations on twitter erroneously being claimed as representative of the views of all conference delegates.

Similarly, the dominant conversations on twitter could be skewed by diverse factors such as:

During the event we handed out flyers to delegates with advice on structuring tweets to ensure tweeters could easily associate tweets with specific conference events and themes.

Here are some of the key learning points to help to create a bridge between real and virtual event experiences:

Just noticed #caasoton delegates are sharing their schedules's URLs with each other to plan meetups at the conference. You can do the same!

If you want something to read on the train/ coach/ plane why not start looking at the #caasoton posters: bit.ly/H7k5YW

We expect the materials we have created and archived will play a role in determining the structure and focus of next year’s event; as will ongoing members of the event organisation team.

Lisa Harris is a senior lecturer at the University of Southampton focusing on digital marketing. She chairs the Digital Economy University Strategic Research Group with Graeme Earl. More details at: http://lisaharrismarketing.com

Nicole Beale is a PhD student at the Archaeological Computing Research Group, University of Southampton. She is researching into the cultural heritage sector can engage with the Web as social machine. She blogs at http://theculturalheritageweb.wordpress.com/
LinkedIn: http://uk.linkedin.com/in/nicolebeale
@nicoleebeale

Graeme Earl is a senior lecturer at the University of Southampton focusing on digital humanities research. He chairs the Digital Economy University Strategic Research Group with Lisa Harris. More details at: http://digitalhumanities.soton.ac.uk/people/graeme-earl/

With thanks to Buzz Radar for use of the conference image.