In its latest update to investors Twitter reported poor user growth now with a total of 313 million monthly active users, the social network added only 3 million users in the past three months and added a total of 11 million new users since the first quarter of 2015.

This chart clearly shows how the growth rate of Twitter is lagging behind that of its  competitors. Instagram recently passing the 500 million user mark while WhatsApp and most definitely Facebook are way ahead in terms of user growth. 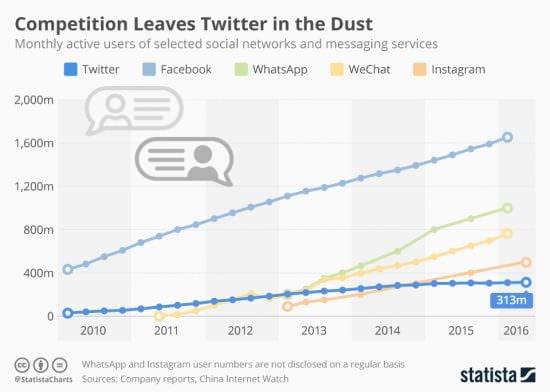 ComScore research has also shown that Facebook dominates both social media by audience and engagement, with 63% of the 18-34 age gap audience accessing the app on a monthly basis and 15 days on average per month that the app has been accessed. Both the ComScore research and the chart above show just how "addictive" Facebook is, especially when compared to other social media. Twitter had just 22% penetration in the ComScore research and an average of just 7.5 days of users accessing the Twitter app. Notably Facebook messenger was in second place and Google Plus was in last place.

Twitter is still important especially for getting news across the world and fast, it just isn't harnessing the the same level of growth that Facebook and Instagram are experiencing. Facebook has a long-term commitment to its user experience and product development; Twitter does seem to be leaning towards the Facebook approach, but it has a big problem with its ad platform.