How to respond to positive and negative online conversations

By Expert commentator 20 May, 2013
Essential

Defining a structured approach for managing your online brand reputation

When you are running a social media campaign, or even in your day-to-day monitoring and community management, you will, of course, come across both positive and negative mentions about your brand.

Most of us know by now that ignoring negative comments never pays, and that not engaging with your fans is a missed opportunity.

Dell manages their brand via social, with a classic approach as outlined below: 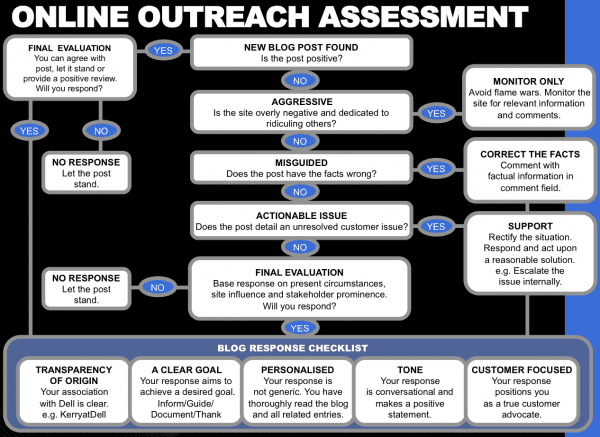 So how should you deal with negative brand comments?

1.  Firstly, it’s important that you find those comments in the first place. You should be monitoring conversation about your brand across the web. It’s the only way to know what is really being said about your business, to stop the spread of misinformation and to sort out an issue before it turns into a crisis.

Enterprise tools (such as Brandwatch, Marketing Cloud/Radian6, Sysomos, Synthesio and UberVU, to name a few) are ideal. But for those without the budget for tools such as these, at the very least you should be utilising one of the many free tools around (though be aware that the coverage won’t be comparable to paid tools). Even Google Alerts will provide some form of protection.

Once you’ve mastered finding conversation about your brand, you will then need to decide if, and how, to respond to comments and posts that you find.

2. Choosing which mentions to deal with first

It would make sense that very negative posts should be responded to first. That in no way means that other comments are not important, but it’s likely that someone who is very angry and in the heat of the moment is only going to get more angry the longer they are ignored.

If you’re using a good tool, it will normally have some automated sentiment built in. This should give you an indication of the most negative posts. However, as sentiment analysis can never be 100% accurate, it is worth setting up additional rules that will classify mentions containing particular phrases or words as chosen by you.

Some tools will also let you set up email alerts based on specific parameters, so you could choose to be emailed every time a negative post is found.

You still have to respond to other posts, positive and negative, in a timely manner. Don’t underestimate the momentum of responding very quickly to positive posts; doing so will often elicit more positivity from the fan, demonstrating to them and their followers that you are listening, responsive and appreciative of their custom.

Also, don’t just respond to messages that include your @name or are on your official page. Monitor comments that mention your brand but don’t necessarily link to your profile/page, especially if they are negative. This will show customers that you care and are listening and will delight those who are already fans.

Don’t be afraid to be seen as ‘interfering’; as long as you don’t barge in with a pushy sales message, most posters will be grateful and appreciative if you respond to comments - and will often be impressed that you found the comment even when it wasn’t targeted directly at you.

You might also take into consideration which posts are likely to be seen by the most people. As much as we might like to treat everyone equally, it’s likely that you will want to deal with those with the biggest online influence first. As above, that in no way means that the others aren’t important. After all, they might have few followers but could have hundreds of friends in the ‘real world’ who they’re telling their complaints to right now, so don’t ignore any of them.

Let’s deal with positive posts first, as they are likely to be less daunting than negative ones.
It’s always worth thanking those who have shared your content, or who have made a positive comment about your product or service.

It may be that you receive so many positive comments (which can never be a bad thing!) that you couldn’t possibly respond to them all. In that case, respond to a selection of them – this will show others that you are listening to their comments.

Which ones you respond to could be based on a variety of factors – perhaps those that add additional comment when sharing your content, those that are particularly positive, those that have a large following etc. It all depends on your brand, but answering some is better than responding to none.

So, thank them, talk to them, engage with them. Be human, be fun and be nice. If they like a particular thing you’ve done, and you have similar content that can add further value, share that with them too.

Neutral comments (‘I’m eating a Mars bar” or “Going to HSBC now”, for example) might not be worth commenting on if your resources are limited. Responding to neutral posts could lead to more positivity from that poster, so if you have the time, then why not, but larger brands might find it difficult to respond to the number of posts like this they receive.

Questions are more important to answer. If someone is asking you a question on social media, it means they expect you to answer. So do. An unanswered question could result in a loss of a sale, a disappointed fan or even lead to negativity. Answer quickly, honestly and accurately.

...and how to deal with negative social posts?

Negative posts may need more thought and more care when responding. Of course, you can never predict what people might say about you online, but here are some general guidelines that should help in most cases:

What about trolls or chronic complainers?

It depends where and what the nature of the post is, but dealing with trolls is never easy. You may want to delete posts if they’re on your page and are offensive, or in some cases it might be best just to ignore them. If it’s false information, there are some steps you can take to get it removed, or at least respond with clarification.

You may find that the odd person appears to have a problem with your company, and continually complains. This might be more to do with them than you. If you’ve tried to offer a resolution, or have spoken to them before and they are continuing, it might be best just to ignore them. You don’t want to turn it into an argument, so sometimes you have to throw in the towel.

There’s a lot of ‘noise’ on the internet, but responding to comments about your brand - positive or negative - can pay dividends and avert potential crises.

Thanks to Jasmine Jaume for sharing their advice and opinions in this post. Jasmine is a Community Manager for leading social media monitoring tool of Brandwatch, and also a lover of all things social. You can follow her on Twitter or connect on LinkedIn.