What can we learn from brands who were early social media adopters?

As many of the savvier global brands have found, being an early adopter of a new social media site can be an unprecedented opportunity for branding, visibility and platform building. In fact, doing so is a key strategy for staying relevant in an ever-changing business and marketing environment. In essence, being early means getting to be a real leader, determining just how companies will use that new space; it also means getting to connect directly with key influencers before the platform gets too crowded with competitors.

But with that leap of faith comes real risk, and there's always the chance you could fail at a very public level. That, after all, is why many staid brands hesitate to join in, clinging to advertising models that are fast becoming irrelevant. The irony of being a successful early adopter is that you have to be willing to fail, then pick up the pieces and move on.

For a glimpse of how to do it right, we've drawn from this excellent Brandpolis report on the future of social media to compile a few inspiring case studies. Let's take a look at the following inspirational companies and the principles they can teach us.

When Pinterest first launched, few businesses knew what to make of it. In fact, it pretty much embodied what has become the run of the mill social media marketing dilemma: how to get down to business on such a personal medium. The site, after all, isn't that different from a pinboard hanging on someone's office wall, and creating a 'FREE OFFERS!!!' kind of board would only make a brand the subject of mockery. That, however, didn't stop many brands from listing profiles, but many did so without bothering to learn the potential benefits and hazards of the new platform.

Starbucks, for example, made a board to which anyone could pin, but did little to direct its followers, essentially leaving itself vulnerable to negative responses.

As is so excellently profiled in the Brandopolis report, something clicked for the marketing team at Honda when they saw the Starbucks board: Why not turn the open nature of Pinterest into an opportunity for collaboration rather than a vulnerability?

It was a brilliant pivot, and one that would shape the future of marketing on Pinterest. Honda launched a campaign called Pintermission, promising $500 to 5 top pinners to take a break from their pinning habit by taking a spin in a new Honda.

Given how new the platform was at the time, the influencers who received the pins below were suitably impressed, therefore naturally motivated to promote the Honda brand and new car release across their own Pinterest and other social media presences. 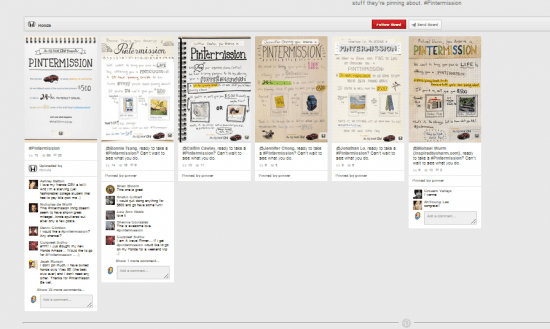 Just like with Pinterest, brands didn't really know what to make of Twitter when it first came out (in fact, most still don't). But that—and, to be fair, due to early online mishaps in 2005, when bloggers wrote negative reviews about Dell's tech support and the company had no mitigation strategy—didn't stop Dell from experimenting. As the Brandopolis report details, that mentality of experimentation, supported by the top brass, was really key, as it allowed marketers to really suss out the platform's strengths and weaknesses and build a playbook as they went.

The marketing team started small enough with 'mini campaigns,' like issuing coupons via Twitter that help followers become further aware of brand offerings. This built a small but loyal following well within the company's target demographic, which was enough success to allow for the creation of a team dedicated to figuring out the platform, meeting once a week for 90-minutes to brainstorm and launch an array of further experiments.

From there, Dell developed a more holistic online marketing strategy, training employees not on how to use any one specific platform but on principles of blogging, micro-blogging, business networking, and so forth. This was a crucial step, as so much of marketing today is about operating within an entire brand ecosystem, zigzagging between social media and content marketing without so much of a blink of an eye.

This allows Dell to create much more complete campaigns, like, say, an infographic posted on a blog and promoted on social media. Now this more global strategy is expanding to even encompass offline sales, so Dell can follow the entire customer journey from Tweet to blog to website to in-person sale.

Known for its adrenaline pumping stunts just as much as its actual product, Red Bull has long been associated with early social media adoption. It's not surprising, then, that the company has become a leader on Instagram. I mean, just look at the company's profile page: 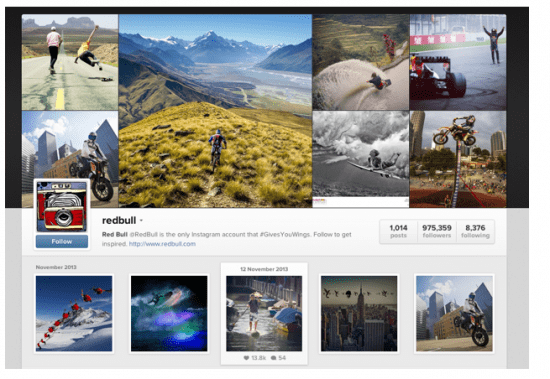 Adhering to the lessons of branding 101, everything about the look and tagline of this page scream 'Red Bull,' filled as it is with photos of adventurous people. Of course, this shows an excellent mastery of what is essentially a photo platform, but Red Bull goes beyond this, eagerly embracing the new Instagram Video with a death defying Mount Everest Leap.

More recently, the company has gotten creative with the photo platform, producing this excellent stop motion video compiled from photos from a cliff diving event in Wales.

Though Red Bull actually uses Instagram the least out of all of its platforms, the platform brings in the most engaged following, generating the most likes and comments. Its follower base is also growing rapidly as the brand continues to share news from its Instagram account across all of its many other well-liked social media accounts and avid followers share their work.

As one of the earliest Google+ adopters, H&M is also one of the platform's biggest success stories. Because H&M has a wide following on a number of social media platforms, it would have been easy for the low-cost fashion company to simply re-post its old material in this new, unknown social arena. Instead, H&M stuck to its wider strategy of posting unique items to G+ that it felt would be directly relevant to its specific audience of followers.

Probably because G+ is so visual, that strategy wound up being 'inspiration' rather than, say, promotions or company news. From striking fashion photos to engaging videos, H&M posts garner a large number of shares and +1s. The G+ page also includes promotions specifically for G+ followers, as well as sneak peeks available nowhere else.

New social media platforms, just like all new things in life, come with risks as well as many rewards. Take the time to get to know your social media platform and really master all of the tools, and you'll expand your reach and establish yourself as a savvy industry leader. That's a pretty great bet, and one that will help prevent your brand from looking irrelevant in a rapidly shifting marketplace.

Thanks to Rosie Scott for sharing her thoughts and opinions in this blog post.  Rosie is a digital content strategist at an online marketing company and an avid blogger. You can find her at The New Craft Society or connect on Twitter @RosieScott22.