Dramatic changes in the use of Social Media

The way people use social sharing is changing markedly. Does this mean the 'collapse of context'?

That we see changes in the way people use social networks is hardly surprising since social media demographics have changed. Networks once dominated by teenagers are being 'invaded' by the middle-aged and elderly. The fastest growing segment on Facebook is the over 65s. Not just that, the very college students that started out as Facebook's core user base are now in their 30s, and probably settling down, starting to have kids.

But some of the ways Facebook is changing could prove to be a threat to the very characteristics that make Facebook so successful. The latest figures on social sharing from GWI show what Facebook itself calls the 'collapse of context', where people are sharing far less about their personal lives, and instead tend to share things not personal to them, such as news articles.

The number of people saying they used Facebook to share details of what happened in their daily life collapsed by 32% in just a year, similarly there were 33% drops in people using Facebook to share and opinion and in using it to stay in touch with people. If these trends continue, in a few more years Facebook will be devoid of content about people or their friends, and will just be people sharing information about their work or what they're buying. In many ways marketers are to blame for this, their dream will become their nightmare. The chart below from GWI shows the scale of the drop in context related post, and the concurrent rise in people using Facebook for non-social activities like buying products or promoting their work. 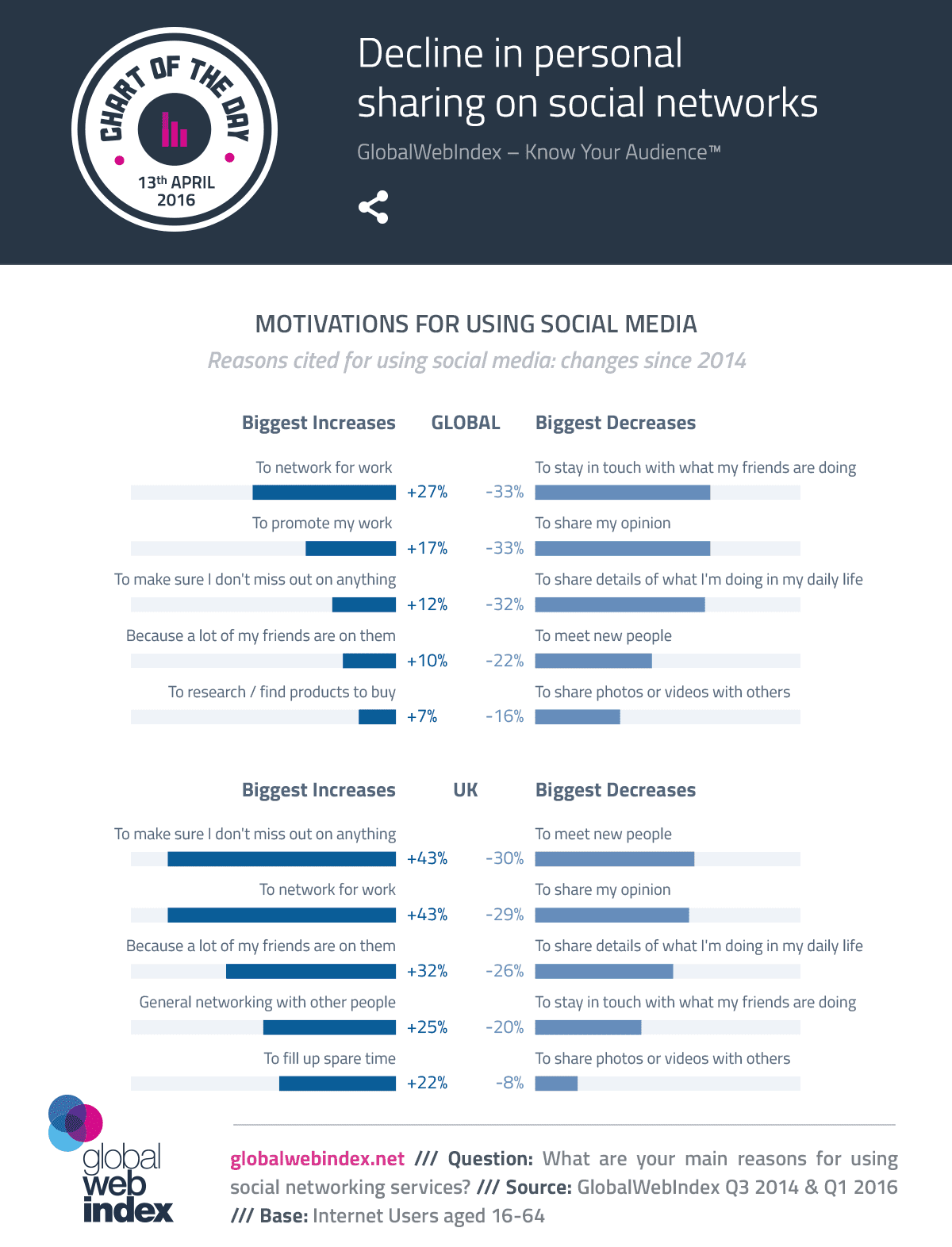 What does this mean for marketers?

If the current trends continue, then it could be bad news. If people are on Facebook to see what their friends are doing and to make sure their not missing out of anything (FOMO), and people are just not really sharing anything on Facebook anymore, then the use will eventually start to decline. What we are witnessing is the maturing of Facebook, and as people's networks have grown to include colleagues and friends, they're less comfortable than they use to be sharing details of their personal lives. This is understandable, and is driving a move towards personal sharing with smaller groups on messaging apps such as WhatsApp or Snapchat.

Facebook is of course aware of these trends, and trying to arrest it. The launch of live video last week is one such way it's trying to do this, others include asking people to share their experiences with notifications on days such as mothers day or new years eve. Whether they will be able to stop the trends is another matter. Facebook isn't going to die anytime soon, but I think we can expect younger users to continue to migrate towards other networks.  Establishing a presence on the likes of Instagram and Snapchat is already key if you operate in B2C areas where younger people are key to sales. It will only become more critical as Facebook loses it's personal touch. Don't be left behind.