The latest changes to the Facebook algorithm [@SmartInsights alert]

Given the amount of traffic that Facebook drives to sites, any significant changes to Facebook’s algorithm are now big news in the way that Google’s algorithm updates have been for years. So in our alerts we look to update readers on all the major changes made by Facebook. This data on visits prompted by shares of articles via social networks shows that Facebook is far more important for driving visits than other social networks across all sites, although this may be different for B2B sites. 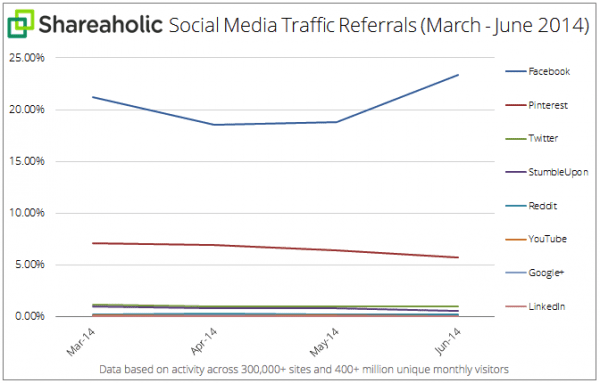 The major change to the Facebook algorithm announced this week has two main parts: a Clickbait filter and a change to processing of links related to status updates. While most commentary on the changes has focused on Clickbait, this is less relevant to most businesses so we start by looking at the changes to how you should best use links in status updates.

Summary of the change to Facebook’s algorithm

It’s common to use visuals in Facebook to make your updates more engaging and shareable. Naturally Marie Page recommends it, with lots of examples in our guide to Facebook marketing. If you do this it then it often appears in the Facebook News Feed with a large picture, a headline and some text that gives context on the link. For example: 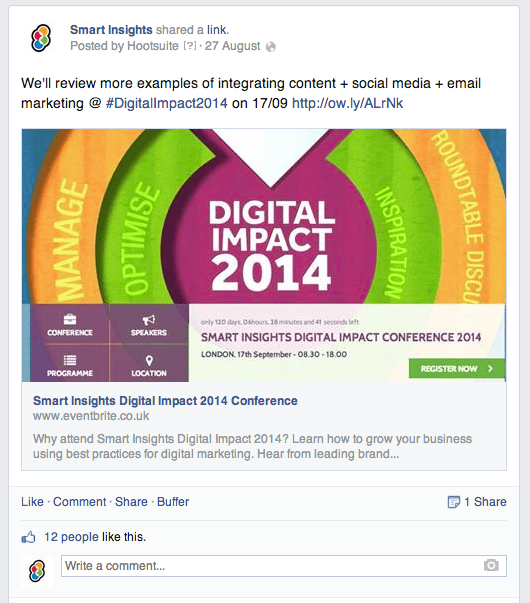 In this new update Facebook has says it will favour status updates using the “Link format”:

“We’ve found that people often prefer to click on links that are displayed in the link format (which appears when you paste a link while drafting a post), rather than links that are buried in photo captions. The link format shows some additional information associated with the link, such as the beginning of the article, which makes it easier for someone to decide if they want to click through. This format also makes it easier for someone to click through on mobile devices, which have a smaller screen”.

Facebook explains that it’s common practice for brands to share photos with a link next to it, but without a preview.

So, how should you do this in practice? If you paste a link into an update or use a tool like Hootsuite to manage social media like we mainly do across the main social networks, by sharing a short caption and link to relevant content then you may already be doing this. Facebook explains it this way:

“The best way to share a link after these updates will be to use the link format. In our studies, these posts have received twice as many clicks compared to links embedded in photo captions. In general, we recommend that you use the story type that best fits the message that you want to tell – whether that’s a status, photo, link or video”.

2. Cracking down on Clickbait

Marketers will know “Click-baiting” as a “Teaser headline”. It’s when a publisher posts a link with a headline that encourages people to click to see more details, without giving much away. Here’s an example:

Facebook has noticed that some sites like Buzzfeed are engineering so many posts like this that get a lot of clicks that they are now seeing a lot of them in the newsfeed so have decided to take action.

How will they determine Clickbait? It will be similar to the way that Google assesses relevant content. If the dwell time on the content after the click is low then that suggests less relevant content and it will be filtered out of the News Feed. If you’re interested to know more, I recommend this article by Jon Loomer on the updates. Jon is a great source for detailed analysis of Facebook marketing techniques.

Jon also has a reminder about another significant, but less often reported update from earlier in August that outlaws incentivised likegating. This was not widely reported since it was hidden in an update from the Facebook developer site related to a change to their programming API:

“You must not incentivize people to use social plugins or to like a Page. This includes offering rewards, or gating apps or app content based on whether or not a person has liked a Page. It remains acceptable to incentivize people to login to your app, checkin at a place or enter a promotion on your app’s Page”.

You still see this Likegating approach quite often, so take note if you’re planning a Facebook campaign at the moment.