An example of a test using Facebook's new paid offers

Facebook Offers was launched earlier this year, allowing retailers to send deals to their Facebook fans' newsfeeds. Until recently it's been a free service. I wasn't even aware of it until I saw an ad for the new paid-for service in my newsfeed this week and decided to give it a go. Here is what I discovered. 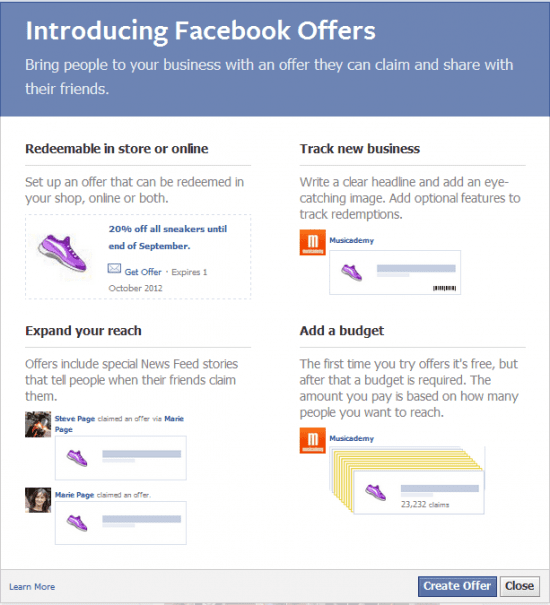 The ad is pretty self explanatory. Users claim the offers by clicking on the ad in their News Feeds and redeem the vouchers to get discounts.

Creating the ad is really simple. As well as the option to update your status or post a photo/video, you now have the option to post an Offer or Event (or various other content such as a poll). You can choose to set up a voucher for an online or physical store:

You then create your ad - you upload an image and have 90 characters to create a message. Here's the one that I created - nothing terribly exciting visually. Note that I used the "Today only" message to reinforce the urgency. Whilst not one of Robert Cialdini's Weapons of Influence, urgency is well documented as being highly effective in encouraging purchase. 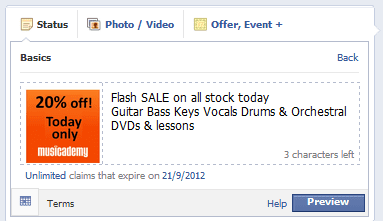 You can limit the number of claims made and select an expiry date. You then decide on your budget. Facebook are giving your first ad away for free (I think in practice this actually means they will put a hugely generous $10 towards it). This seems to work very much like Sponsored Stories. I have just under 4,000 Facebook fans so in theory a $15 budget should hit most of them. 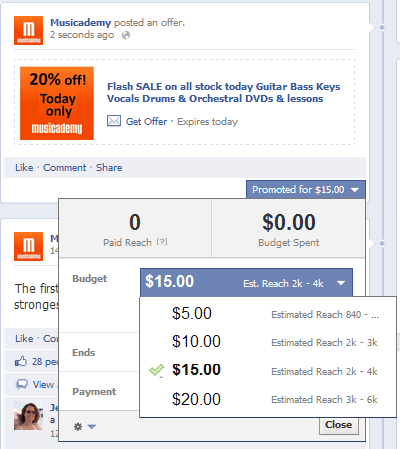 You can schedule your post into the future and even choose to promote with a different type of ad using the Adverts Manager, Power Editor or API.

Once the ad goes live and a user clicks on it, they are sent the coupon code by email. Here's how mine looked. 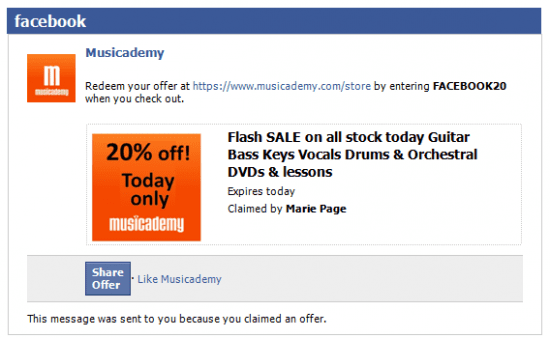 Offers have a good viral effect on Facebook as clicking to claim the deal results in a news story about the offer appearing on your wall. This rather backfired for The Waffle House on a friend's wall recently. He clicked on a coupon which seemed like a pretty good deal only to find that it was for a very basic product and possible to redeem it only at highly inconvenient times. His friends also posted comments about the cheapskate nature of his voucher habit!

So was our test effective? 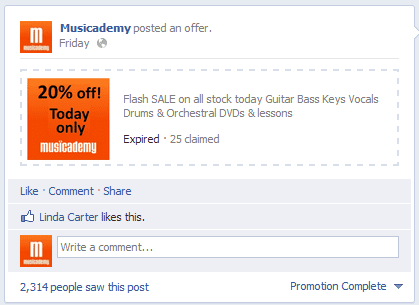 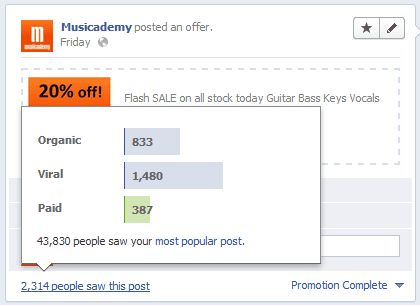 25 claimed the offer and a handful proceeded to purchase. Well worth $15 although I would have expected more than 387 paid impressions for that. It may well be that Facebook will tweak the algorithm on this. I've noticed worse organic spread of ordinary posts in recent weeks and an increase in the spread of promoted posts since I first experimented with the tool a few months ago. All part of Facebook's drive to further monetise and make sure brands pay for exposure.

The debate will rage about cheapening the brand if you are going to use regular blanket promotions like this, effectively educating customers into waiting for coupons. But I plan to use it in the future to promote particular products that we want to shift stock on.

One really clever use of this tool to increase Edgerank would be to make an irresistible free offer that results in lots of fan engagement. Set up a coupon for something free that is likely to be really popular (e.g. a free download). Like this large numbers of people will click to claim the voucher and share it further. That engagement will boost your Edgerank for that customer at least for a short time into the future. You should see a significant increase in your organic reach for subsequent posts.

This was my first time playing with the tool. Have you used it yourself? How effective was it? Any hints and tips?