Facebook marketers have been having a pretty torrid time the last few weeks. Organic reach on posts from brand pages has been slashed in Facebook's drive to extract as much cash from commercial sources that it can. Even consumers can pay to have their status updates promoted nowadays.

The result has been a big increase in revenue for Facebook that's above their target, but the company is still struggling to keep shareholders happy amidst a sliding stock price. And all is not well with brands. There have been numerous grumbles across the blogosphere in recent weeks as the kind of reach levels brands previously enjoyed free of charge are only now attainable with some hefty advertising spend. This sudden change has caught many brands unawares and has been a bumpy ride for many used to enjoying free promotion on the world's favourite social media platform.

Here's one example: Lisa Robb, part of the team responsible for Park Bench, one of the UK's most engaged Facebook Pages, says 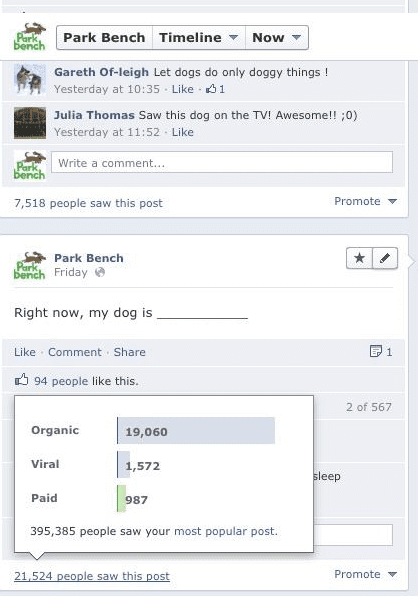 Another example of the impact of the new changes is UK company Charity engine. Their CEO Mark McAndrew told ReadWriteWeb:

“By November we had over 100,000 fans from all over the world and we'd never even posted to the page. As Charity Engine needed just 10K users to be viable, and cost nothing to download, this was hugely exciting.”

But the company now considers that changes to Facebook’s EdgeRank and the need to use Promoted Posts are threatening its very existence. Charity Engine can’t contact its Facebook fans with any degree of certainty to let them know the product has launched. They estimate that each Promoted Post would cost up to $4,500.

Ally Manock, Head of Digital Strategy, Planning & Insight at Brass Agency reckons that the Facebook algorithm was further tweaked last week to hugely favour Comments over Likes and Shares. That's certainly my impression and would appear to be the case based on Park Bench's figures.

Here's a Musicademy post from 23 October (I estimate this to be after the first big algorithm change at the end of the summer but before last weeks'): 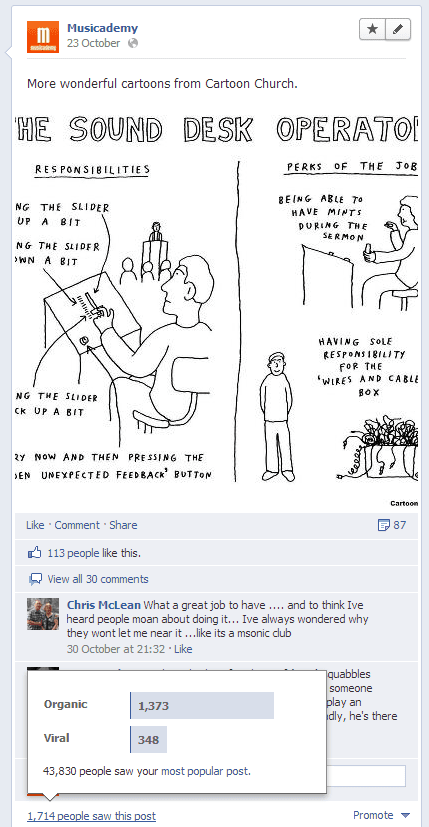 With a healthy number of likes, shares and comments, this (non-promoted) post has done really well. However, it's still only achieving about the same amount of organic reach than a standard post would have done pre algo change.

Look at the virality (amplification) levels this post achieved in comparison to our rather pathetic other posts (it's the 5th on the list). This makes me pretty mad. A post with natural amplification of 23% should damn well get shown to a wider audience without having to pay for it. After all, those fans have ASKED Facebook to be alerted to updates: 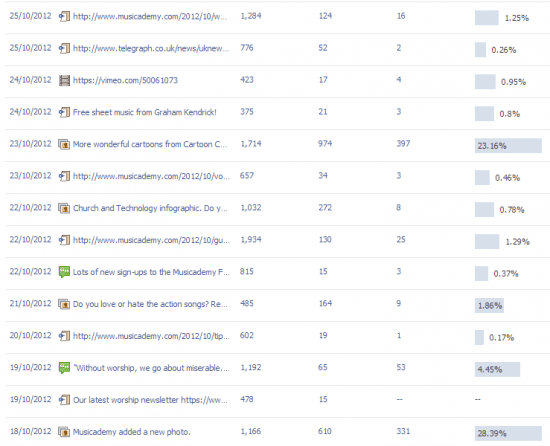 The other very viral post in this selection was us jumping on a meme. We'd come across a "Keep Calm" poster that applied to our sector so inevitably there were lots of Likes and Shares. This too makes me mad though. It means that the content that gets out to (in this case about a quarter) of our fan base is the rather more fickle, funny stuff rather than the (in my opinion) amazing serious content we also produce.

I'm not alone in these thoughts:

Here's part of a thread on a discussion I've been having on one digital marketing forum with Carlton Jefferis, Founder of new Facebook-based start-up Gettus!:

"EdgeRank is a broken and useless algorithm that completely goes against Facebook's mission "to make the world more open and connected". Contrary to popular belief it was *not* designed to help people see stuff they'd want to see. It was designed to *stop* people seeing stuff. We've all been taken for a ride! It's the ultimate filter bubble. Everyone sees the same old ****. This is where Twitter and Google+ currently win. Let ME decide what I want to see, not some poxy bit of code."

Carlton went on to tell me:

"We're heavily geared towards Facebook but decided to halt our planned Page activity and advertising until the outlook and ROI is more certain. Things are changing very rapidly. As a start-up with limited resources we will not invest in anything that doesn't directly deliver against business or marketing objectives. I'm not just talking about money either - the time and effort we invest in our Page is just as valuable, if not more so."

"It's very simple...Facebook are squeezing all Pages to ensure that they get our $. On a purely commercial level, brands and organisations have had it all on Facebook without the necessity to spend on ads/promoting posts etc. Whether this results in a healthy profit for Facebook or a mass exodus/migration will be left to be seen. I predict the latter if they continue putting more bricks on to the walled garden."

For now brands and agencies are working hard to get under the skin of the new algorithm, Ally Manock says  "We're experimenting a lot with time of day and the content we're putting out there...but it's quite hard to see patterns. One text-only post at a random time of day got 3x normal reach. We then tried to replicate and nothing. It all seems so up and down at the moment."

This post from Inside Facebook describes how the company is testing a Pages option (similar to Close Friends) where fans can opt to receive a notification every time a Page publishes a new post. 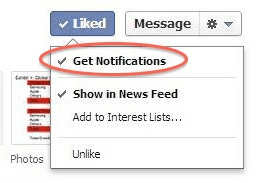 And if you click here https://www.facebook.com/pages/feed, you will see a new Pages Feed that just contains recent updates from the Pages you're connected to (this made me unlike lots of brands - horrified at the quantity of junk they were spamming me with). It's unclear whether this feed includes all recent Page posts or some filtered selection of posts.

How should brands respond?

I think you need to carry on creating content that is engaging. I've written about it extensively here before. And it's also worth keeping an eye on the Notifications and Page Feed features outlined above Once they're available for everyone then it will be worth explaining to fans how they work. If you wait a few weeks you will probably find other brands doing that first so you can ride the wave of their explanations a little. That will probably need some advertising budget to guarantee you getting the message to as many of your fan base as possible.

I also think you need to look at shelling out for advertising. I'm going to write about Promoted Posts and Sponsored Stories in the light of all this in a couple of days. I think brands need to be super careful right now to avoid turning people off. Facebook users are feeling increasingly blitzed by brands and we need to make sure we get the balance right.

Michelle Goodall gave me her view: "Brands and organisations need to treat Facebook as a medium where a blend of earned and paid is now required. How we do this will require tweaking as we understand more and more what our fans actually want from us and Facebook needs to allow us to segment our fans in better and more relevant ways".

What's been your experience of Facebook recently? How are you responding?

Thanks to Michelle Goodall, Carlton Jefferis, Ally Mancock and Lisa Robb for their contributions to this post.