Comparing options for advertising in Google AdWords and Facebook

According to a recent Search Engine Land post, some Google customers are abandoning PPC due in part to rising keyword prices. It's an interesting post, and it claims that the majority of PPC companies are, in fact, SMEs (small and medium-sized enterprises - SMBs in the US).

The final 2012 financial results reported for Google published on January 22nd 2013 show some evidence for reduced competition in that although paid clicks have increased overall globally, CPC has declined significantly, suggesting reduce competition for bidding or fewer advertisers in some markets:

Wanting to compare the effectiveness of AdWords, I unpaused a few AdWords campaigns that I had stopped over the summer and created a new campaign for a new product that appeared to have zero long tail key phrase competition...

Google wanted a whopping £1.25 for a minimum bid. For a phrase that no one else was bidding on. I stuck in a maximum click price of 10p and waited. Sure enough, I've had some clicks. This is quite ridiculous. I guess by inflating the apparent minimum price Google incentivises some people to pay up but clearly there is a game to play in refusing to pay the premium. I'm suggest that Google shoot themselves in the foot with this approach though. PPC is simply seen as too expensive for many of the businesses that I talk too. And my personal take from my business and talking to others is that budget is shifting from PPC to Facebook advertising in one of its many forms.

So in looking through my PPC advertising history I can confirm that my keyword prices have indeed increased, particularly for domains and landing pages that don't reflect the keyword in question (meaning that PPC advertisers need to pay particular attention to the Quality Index in their ads if they are to minimise costs)

For balance, I should say I do find equivalent PPC prices to be lower on another account I run which enables more precise targeting so better quality correlation between the keyword, ad and landing page. And a history of good CTR does get rewarded.

The whole AdWords system seems to have lost some of its beauty though. Our PPC budget is a tenth of what it was five years ago. And yes, that money is going into Facebook instead.

But Facebook's frequent changes are keeping brands and agencies guessing about budget allocation, and frustrating those for whom last-minute changes prove challenging. Ally Manock, Head of Digital Strategy, Planning & Insight at Brass Agency says her clients media budgets get planned quite far in advance and it can be hard to wrestle budget into another area. So she says "We just have to keep really pushing ourselves with content, keep testing and hope it gets better".

But what of advertising on Facebook? All is far from rosy there.

I reported a few days ago on the changes in the Facebook algorithm which has seen organic reach slashed. Right now I'm seeing just a 10% organic reach now with an average post. A super post (one had a virality of 35%) jumps to just 20% without the aid of any ad spend (sponsored stories, promoted posts, plain old ad). Throw some dollars in there and it rockets. But I'm also seeing a big backlash in my newsfeed of people fed up with ads and boycotting brands that are spamming them on their wall.

So what type of advertising should we choose on Facebook?

Comparing the options here, there are Promoted Posts, Sponsored Stories, the ads in the right hand column. And should these link to your Facebook Page, a post or perhaps another url?

Matt Owen over at Econsultancy wrote an excellent case study on the use of Promoted Posts recently. It's worth trawling through the comments to get a picture of how Promoted Posts (to friends of fans) are working on the ground. Many of us are reporting low quality likes with new fans appearing from Malaysia and Indonesia. Matt and most of the commenters seem to conclude that for now, Promoted Posts is not a good use of budget.

In the light of this I carried out a couple of experiments in recent weeks to see what's working well in terms of ads on Facebook.

My first ad went to fans only and the second to friends of fans. It was a piece of content that we felt was pretty valuable and certainly picked up lots of positive feedback in its blog incarnation. We kept the bid level pretty low starting at 12c and then going to 15c when it seemed to be getting little traction. Whilst the bid was as much as 15c, the actual prices we paid ended up being 8 and 9c.

There were two options for each audience, one was an ad in the right hand column and the other an ad in the newsfeed 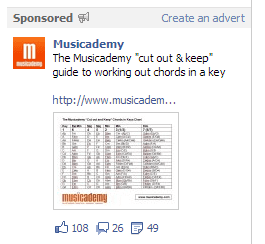 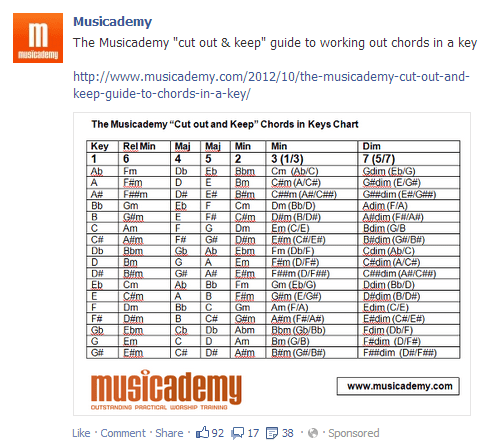 So let's see what happened to reach: 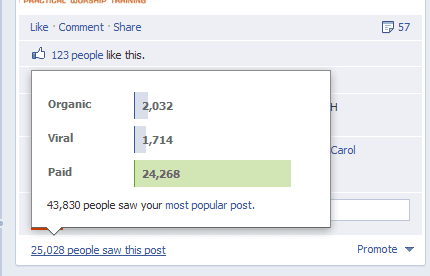 Organic reach was pretty good - just under 50% of our fan base. We've seen nothing like this reach with recent posts (even those with good viral potential) so I'm somewhat suspicious of this figure. But the paid reach was immense. 24,268 impressions for a total budget of $66.56.

The actions and CTR were pretty good too. Here are the results of the ads to fans only:

No surprise that real fans like clicking on some decent content. 552 actions is not bad at all.

The ads that went to friends of fans had a CTR of 1.237. That's pretty good given that many friends won't remotely share the somewhat niche interest of playing musical instruments in a church worship setting.

Of course the million dollar question is "Does any of this actually impact the bottom line"? And honestly, I don't really know. Sure we can track a few direct sales to our ecommerce site from Facebook. And we know that people like the content. Take a look at the comments below: 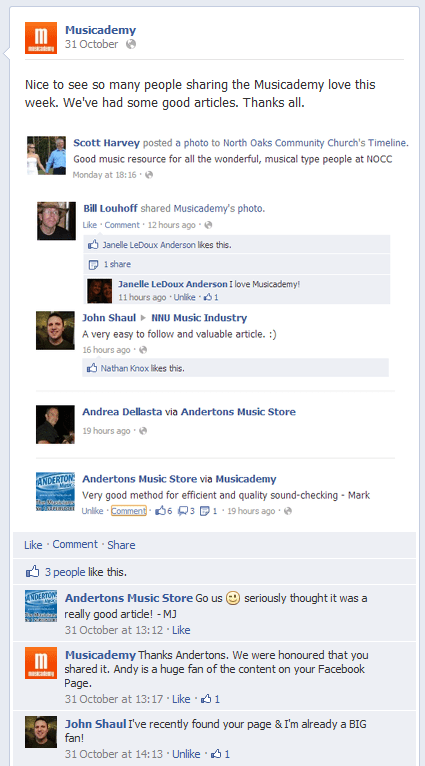 Our customer surveys repeatedly tell us that customers like our content and the kind of content marketing approach that governs all our marketing communications activity is proven to be more effective than the old "interruption marketing" approach of days gone by (See Ann Handley's excellent Content Marketing Rules for more on that topic.). I'm betting a fair old chunk of my working output on this approach being the best for us right now. The effects of PR have always been challenging to measure but I'm convinced that there is value in creating great content. We used to be able to easily seed that out on Facebook, now it takes budget.

But what worries me now about Facebook's myriad options for promotion is that what used to be content led and genuine viral, friends recommending friends content, has been taken over by lazy marketers and it's turning people off big time.

Fab have had me on their Facebook hitlist for the last few weeks and I've been inundated with ads and sponsored stories both in my newsfeed and the right hand ads column. Coupled with their daily (yes daily!) emails I'm really feeling spammed. 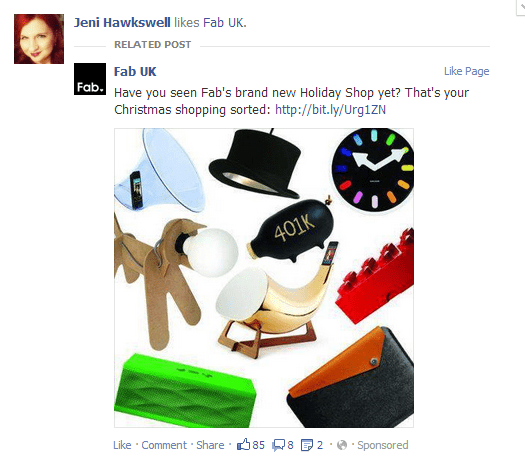 Bosch UK have been playing with the "Friends of Fans" feature (my friend was horrified to find that his friends thought he was endorsing. This would be fine as a one off but Bosch appear to have decided to promote every post so I'm getting daily updates from them in my newsfeed courtesy of my friend's fandom (he's now unliking them on principle).

And brands that really should know better such as Hubspot appear to be playing with Friends of Fans Sponsored Stories rather too regularly. I'm a Hubspot email subscriber and of course I have a fair few digital marketer friends on Facebook. Again, the odd sponsored story is fine but having seen three last week from the same brand just feels like overkill. And I'm target market, let alone what my friend's non digital friends make of it.

Here's a paid for ad in the newsfeed for Le Crueset. I'm pretty much target market and I've only seen it the once so not feeling spammed yet. It's clearly and I imagine it's targeted by likes or demographics. 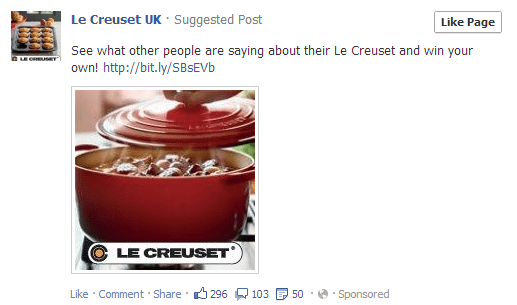 Back in 2011, Scissons, writing on AdAge, reviewed 300 top brands on Facebook over a year finding that engagement was down 22%. He claimed marketers have led to this decline by “dissing audiences with bad content, coupons, polls, contests, and boring filler”. The few brands not in decline didn't necessarily have the most fans, but daily “performed magic” to keep them engaged.

In the light of the recent algorithim changes Ally Manock at Brass Agency says "We''re currently breaking our backs trying to produce 'amazing' content time get that viral rate up in the hope that reach rises."

I'm doing the same. What about you?